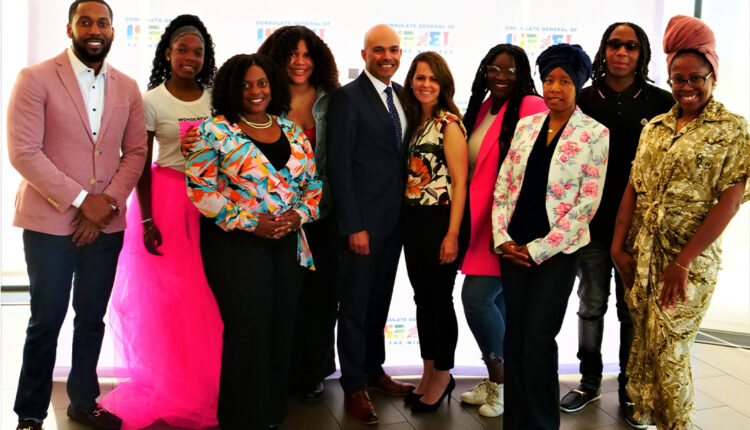 Yinam Cohen, Consul General of Israel to the Midwest, posed with the grant winners.

In the spring, the Consulate General of Israel to the Midwest launched a grant opportunity for individuals and organizations committed to creating critical social impact in their communities in Michigan.

They called on change-makers whose mission, in line with Israeli and Jewish values, seeks to advance public health, environment, social justice, diversity, education and more.

The ceremony recognized the founders of three local Detroit nonprofit organizations, with the Israeli Consulate investing $5,000 to enhance each of their communal initiatives.

Yinam Cohen, Consul General of Israel to the Midwest, presented the awards. Cohen is a career diplomat with 16 years of experience in the Israeli Ministry of Foreign Affairs.

Cohen said that, in general, the consulate tries to expand its outreach to other communities, but the past two years have shown there’s room for them to get even more involved.

“We’ve seen Israel and local communities share a lot in terms of resilience and an understanding that it’s really about the communities to transform challenges into action,” Cohen said. “And we want to create partnerships with those grass-roots organizations who are actually active in their community to do that.

“This is all about taking care of your community, taking care of those being marginalized within the society, those who deserve better environmental conditions in their neighborhoods and cities, and more,” Cohen added. “That’s exactly Jewish and Israeli values, and these are the values ​​we try to share with communities and also show that we share them. There’s so much to partner on.”

“We received tons of applications from organizations all across the city of Detroit and the state of Michigan who understand if they don’t take the initiative and take action, nobody will,” Cohen said. “We had a hard time choosing only three, but I think we chose organizations that make up a beautiful representation of what a civil society looks like here in Detroit.”

Cohen hopes to bring the awards back to Michigan in the future.

“I hope next time we will also partner with Jewish organizations here to amplify what we do and to make sure it’s a long-term partnership,” he said.