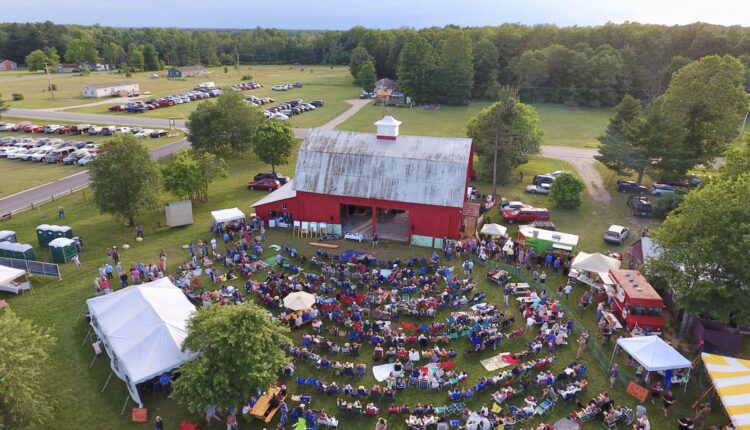 From Michigan Legacy Art Park’s Summer Sounds Series to the return of the Traverse City Film Festival, here are the 25 Northern Michigan events you won’t want to miss this July Up North. There’s something for everyone!

This article first appeared in Traverse, Northern Michigan’s Magazine. Find this article and more when you explore our digital issue library. Want Traverse Magazine delivered to your door or inbox monthly? View our print subscription and digital subscription options.

The Michigan Legacy Art Park once again kicks off its Summer Sounds Series, starting with American rock icon Cary Morin. The art park will also feature other popular artists throughout the month including The Bootstrap Boys, The Timebombs and more.

Don’t miss a rockin’ show at the Pine Performance Center featuring Mark Farner, who was one of the founding members, lead singer and lead guitarist of the Grand Funk Railroad. From his soulful voice and power rock riffs, his stage presence is one you will surely remember.

Parallel 45 Theater opens the 2022 Summer Festival with a fun and contemporary theatrical experience of Kander and Ebb’s Cabaret, bursting at the seams with sparkle, feathers, brilliance and heart.

Catch live music at Encore 201 in downtown Traverse City all month long, including bands and artists such as Tyler Roy, Gasoline Gypsies, James Armstrong Band and much more.

Have you ever wondered what Empire, Michigan was like back in its heyday? Or maybe you just like to explore cool Northern Michigan towns. This walking tour with SBD Tours is the perfect way to explore this iconic area in Leelanau County.

Get a taste of only the best! Join this premium tasting at Black Star Farms and try five of their top-tier wines, including a traditional bubbly method, limited-production reds, and an ice wine-inspired treat as the grand finale.

Whether you like golf or just want to enjoy time with friends on the course, take on this golf outing and benefit at Otsego Resort during the Fourth of July week. Rain or shine, this outing will include a cookout immediately after and plenty of outdoor fun.

Head to the Erickson Center for the Arts to see Mike Bliss, who has been performing his award-winning comedy and magic shows for over 30 years all across the country.

Ready for live music? Plan a night out to this show at City Park Grill featuring Huckleberry Groove, a high-energy, slightly unpredictable, inside joke-telling band that’s always having more fun than anybody else in the room.

Showcasing many music styles from folk to bluegrass and many more, plan a trip to Harbor Springs for the annual Blissfest Folk & Roots Music Festival.

Get ready to relax! Bonobo Flow by Dharamsala TC is an all-level vinyasa flow designed to help you kick off the weekend with the perfect balance of self-care and fun.

Taking place Sundays from 11 am to noon, head to Two K Farms for “Yoga By The Bay” followed by delicious drinks. Enjoy panoramic views of West Grand Traverse Bay, vineyards, and orchards.

A group of teenage girls fall ill and no earthly cause can be identified… is something larger to blame? UK-based director Michael Burditt Norton (Hedwig and the Angry Inch) brings Arther Miller’s The Crucible to life in a compelling and irreverent spin on this central work in the American canon. The show is performed and hosted by Parallel 45 Theatre.

Fountain Point Resort welcomes Chris Barron, Shawn Mullins, and Steve Poltz for an intimate, outdoor music experience. Together, the three artists will perform in a traditional writers’ round, as they take turns sharing original songs and the stories behind their lyrics.

Get ready for floral fun! The Friendly Garden Club of Traverse City presents their Between the Bays 39th Annual Garden Walk on Old Mission Peninsula. The garden tour features four private gardens and the First Congregational Church’s Garden of Remembrance.

It’s the event of the summer for this UP arts center. Support Erickson Center for the Arts at Chamberlin’s Ole Forest Inn with a fundraiser featuring a silent and live auction, wine and cheese tasting, and live music.

A two-day festival for artists, locals and visitors alike, this yearly event provides a beautiful backdrop set upon the stunning lake shoreline in Bay Harbor.

Returning this summer, the Traverse City Film Festival is a local favorite. Plan on six days, 40-plus incredible films and filmmakers making an appearance throughout the week.

Sojourn Lakeside Resort’s beloved Summer Concert Series is back! Enjoy a night of fun featuring this Beatles tribute concert that will have you out of your seats and singing all night long.

A night of music and arts awaits! Held at Crooked Tree Arts Center, musician Josh Martin will take you on a musical journey. He has brought together the ultimate all-star cast of Nashville’s finest roots musicians to create an electrically charged acoustic string band.

Catch the show of the year hosted at The Pine Performance Center. Oliver! is a musical twist by Lionel Bart based on a classic Charles Dickens novel.

Parallel 45 Theater will end its summer festival with ALICE: A Rock Musical, an original parody production created and performed by P45’s Youthquake Company and directed by Daniel Lendzian.