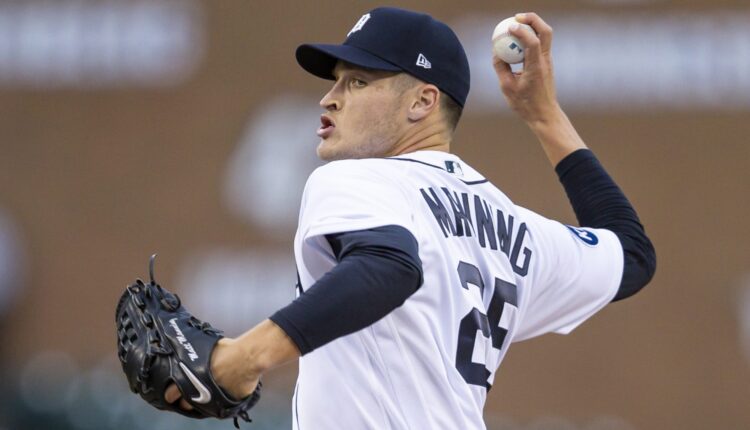 Detroit Tigers may be missing Matt Manning for longer than expected

The Detroit Tigers have had to deal with an injury bug that has decimated their rotation and entire roster, really. But one of the pitchers who has been out for some time now is on the road to recovery.

Well, hey what. Detroit Tigers starting pitcher Matt Manning was working through his rehab assignment when he sustained a setback that led to him exiting a rehab start early on. It was made clear that it was not an arm injury but rather some sickness that resulted in him being pulled early.

Since then, it has been announced that Manning will miss more time than was initially planned with tendinitis in his bicep. This leads me to believe his early exit from the other game may have had a little bit more to do with his arm than just him feeling ill.

Nonetheless, Manning will miss time and remain on the Injured List (IL), as an article from the Detroit Free Press states that AJ Hinch said he would not be throwing for the foreseeable future after this news emerged.

Detroit Tigers’ Matt Manning suffers a setback as he deals with tendinitis.

Manning was one of the first pitchers to catch the injury bug after he and Case Mize found their way to the IL early on in the season. While this is not the only reason the Tigers are struggling, the decimation of rotation has undoubtedly not been helpful for their abysmal performance.

With this news, it leads to some speculation that the Tigers’ rotation is not going to be returning to the initial group of arms for quite some time. Manning was expected to get his shot at locking down the fourth or fifth spot in the rotation, but instead, he’s got to focus on getting healthy first.

He’s made just two starts in 2022, exiting after just two innings from the second one. He’s pitched in eight innings total, where he’s allowed six hits and two earned runs. He has not surrendered a walk but only has four strikeouts to his credit.

There’s plenty that Manning was working on, including trying to refine his pitch mix and locating his pitches, not leaving them in spots where hitters are going to get on plane easily. Especially with his size and the way his fastball plays.

But all of that progress is on the shelf until Manning can get healthy and back to the big leagues from his time on the IL for the Tigers.