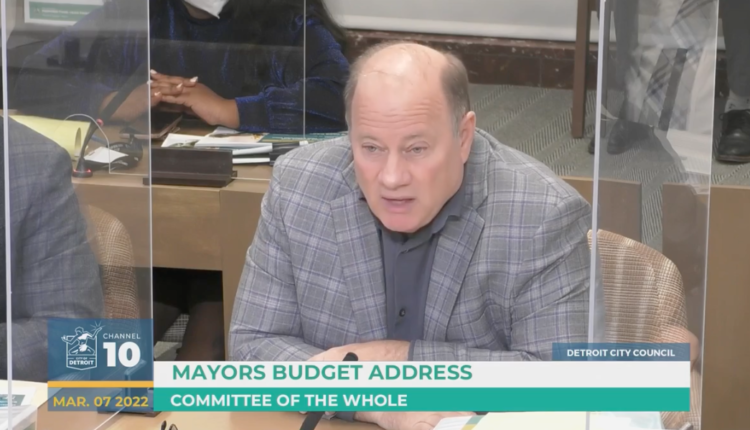 Detroit Mayor Mike Duggan’s 2022-23 spending plan calls for a major infusion into a city fund earmarked for retiree pensions as well as efforts to bolster transit and combat blight.

Duggan on Monday said his proposed $2.45 billion budget will be “tight” but he views it as a “return to normal” following the COVID-19 crisis.

The looming challenge ahead for the post-bankrupt city are the massive contributions from the city’s general fund that will come due in 2024 for its two pension funds.

Though a funding package coined the “grand bargain,” was able to shield the city’s arts collection from creditors in its bankruptcy and soften retiree pension cuts. Under that plan, Detroit was relieved of much of its pension payments through 2023. In 2024, the city will have to fund a substantial portion of the obligations for the General Retirement System and Police and Fire Retirement System.

Detroit in recent years established a dedicated Retiree Protection Fund to amass hundreds of millions to tackle the pension payments. Duggan on Monday recommended a one-time contribution of $90 million to the retiree fund to bring the overall total to $460 million. The first payment from Detroit’s general fund is projected to be about $117 million.

“Everybody here remembers what happened to our retirees and the way they were hit in bankruptcy for benefits they’d earned over a career,” Duggan said during his Monday presentation to Detroit City Council. “We have planned from the beginning to fund that 2024 (pension) cliff so our retirees are not back in bankruptcy court having their benefits cut again.”

Detroit might be ahead of the rest of the state in its economic recovery from the coronavirus, but it must continue to prepare for 2024, warned Eric Lupher, president of the Citizens Research Council of Michigan.

“When that money is spent then it becomes a general fund cost to the city. Before it can spend the first dollar on police and fire, or parks or garbage collection or anything else, it is supposed to set money aside to make its required pension contributions,” Lupher said. “So the bigger that required contribution, the more it hurts the city to be able to afford the other ongoing services that we all count on the city to provide.”

Detroit received $826.7 million in American Rescue Plan Act dollars for a variety of investments. None of that funding can be spent on pension obligations.

Besides the retiree fund contribution, the mayor’s plan proposes $17 million in blight funding and $50 million toward maintaining buildings, parks and for neighborhood planning studies and to support city cultural institutions including the Charles H. Wright Museum of African American History. One-time allocations are being funded through a fund balance of about $130 million, Duggan said.

Duggan has also proposed directing $72.3 million from the general fund for Detroit Department of Transportation service and the People Mover. There also will be a $5.8 million increase for paratransit services. The service, he said, has “done a really poor job” and officials plan on “tearing the process apart.” A change in providers is imminent, the mayor added.

The mayor also expressed discomfort in the city’s sluggish income tax revenues as downtown workers continue to work from home due to COVID-19. City budget officials said revenue risks include a slower than expected recovery from the casino industry, slower than anticipated hospitality sector employment, and continued remote work, among other issues.

Internet gaming revenues however have helped offset some of the city’s income tax revenue losses. That has helped prevent layoffs and other cuts, Duggan told the council.

Councilmember Fred Durhal III, who chairs the council’s Budget, Finance, and Audit subcommittee, asked Duggan about the impact of downtown workers staying at home and whether the mayor has a plan to urge companies to have their employees return to the office.

“I don’t feel like it’s my place to tell private companies what to do, I think most of the major downtown employers are bringing people back,” Duggan said. “The question is what is it going to be like long-term because a lot of folks have gotten used to working from home.”

Duggan on Monday said he is focusing on attracting companies like Majorel, a tech company that has agreed to employ 500 people who will be required to work in-person to create a team environment downtown. Duggan said he hopes more companies will take this approach.

Some residents shared their dismay with Duggan’s budget plans during the public comment portion of Monday’s virtual budget presentation, arguing the city’s resources aren’t being allocated to prioritize Detroiters’ livelihood. The mayor left the room before public comment began.

Resident Tahira Ahmad was bothered by the mayor’s commitment to parks and questioned how federal funds were being used.

“I would like to encourage our city council members to examine this budget with a fine tooth comb,” she said.

Theo Pride, of the Detroit People’s Platform and Budget Justice Coalition, said year over year city investments have not been allocated to support resident needs like infrastructure, libraries, affordable housing and transit.

“All you have to do is drive around the city, and I do mean the whole city, to see the inequitable development in comparison to places like Midtown and Downtown or go to neighborhoods like I grew up in 7 Mile and Evergreen to see the disparity in investment,” he said.

Detroit City Council is expected to vote on the budget in mid-April and the fiscal year begins on July 1.

This will be Detroit’s eighth year of balanced budgeting and the city’s fifth year in passive state oversight, according to Duggan.

authored by
First published at https%3A%2F%2Fwww.bridgedetroit.com%2Fpensions-continued-balanced-budget-top-priorities-for-mayor-duggan%2F

This Week in Supercross: Round 10 – Detroit