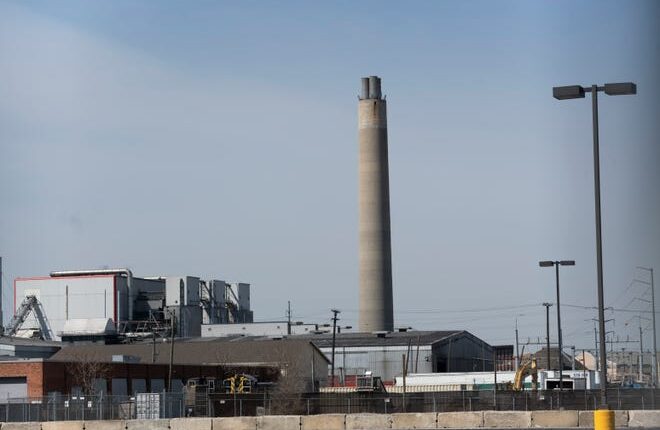 The Detroit incinerator, located at 5700 Russell near the intersection of interstates 75 and 94, has contributed to air pollution and health concerns for surrounding neighborhoods for 30 years, Duggan said.

In 2018, the administration pressured Detroit Thermal Energy, which operated the incinerator, to make major upgrades to the facility to improve its emissions.

“The is a day the neighbors have long waited for,” Duggan said outside the facility. “The odors coming out of the incinerator were atrocious. In 2018-2019, we required the operator to live up to the standards, which they realized was going to be a loss for them and decided to close operations…. But because the incinerator is mostly metal, we’re able to sell the remains.”

Power is expected to be cut by DTE Energy this week and late next week, the building will start being torn down, Duggan said.

The plant, originally built and operated by the city of Detroit in 1989, had been regarded by state officials as the largest municipal solid waste incinerator in Michigan.

It permanently shut down in the spring of 2019. At the time, its private owners said the plant was too old and costly to keep open.

In the year before the facility closed about 65% of the garbage processed came from the city of Detroit. The rest was trucked in from surrounding communities in Wayne and Macomb counties, including the Grosse Pointes, Warren and Livonia. The site has also served as a solid waste transfer facility.

The Detroit Building Authority recently selected Homrich as the company to perform the demolition following a competitive bid process. As part of Homrich’s proposal, the demolition will generate $1.3 million in revenue for the Greater Detroit Resource Recovery Authority from the salvaging of metals and other marketable materials, in addition to getting rid of an unsightly health hazard.

The demolition process is expected to be completed within approximately six months from the time it begins, starting with the demolition of the lower trash processing portion of the complex and culminating dramatically with the implosion of the smokestack later this year.

Since it opened in 1989, the incinerator cost the city approximately $500 million. It drew heavy criticism from northeast residents in the Poletown East neighborhood due to health concerns generated by the rotten egg-like odors and emissions coming from the facility. During the last five years of its operation, the incinerator reportedly exceeded pollution emission standards more than 750 times, according to state environmental records.

“The presence of this incinerator has been a real pain point for this community because it was another example of a health hazard being placed in a lower-income community of color,” Duggan said. “We worked hard behind the scenes to get the incinerator shut down, and now residents of this neighborhood will finally be able to say goodbye to it forever.”

Arrangements are being made to maintain power to an adjacent facility that will soon house the new headquarters and shelter for Detroit Animal Care and Control expected to open later next year.

Homrich has to obtain a demolition permit, which is expected to happen the first week of June. Once it has the permit, Homrich can begin work almost immediately, Duggan said.

Initial work will consist of removing metal and other marketable materials from the facility before beginning active demolition on the processing facility portion of the complex. Demolition of that portion is expected to be completed this fall and implosion of the smokestack, which will complete the demolition, is expected by the end of the year.

The city is exploring potential future uses of the incinerator property.