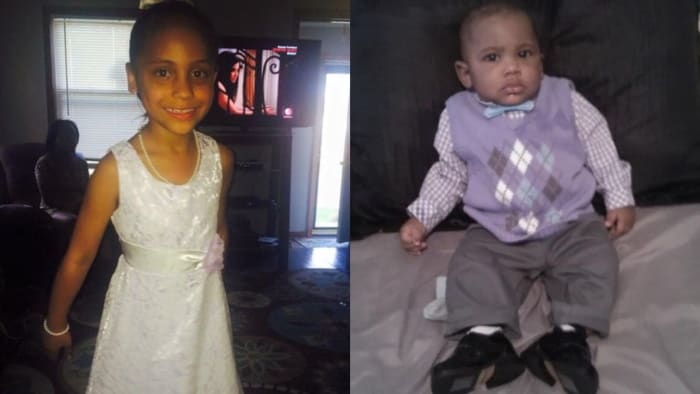 DETROIT – The two young children of a Detroit woman who was murdered eight years ago are still missing.

Kaylah Hunter and Kristian Justice were last seen with their mother, Alicia Fox, in Detroit on May 24, 2014.

Fox was shot and killed by Erin Justice the next day, but her body wasn’t located for another two weeks.

June 5, 2014, was the date of kindergarten graduation for Kaylah at Bradford Academy in Southfield.

“Everyone was excited for her to graduate,” Kaylah’s aunt, Christene Doughty, said in 2019. “Her mom was so excited. She even got her a custom cap and gown made.”

But Fox and her children didn’t show up for graduation. That’s when family members went looking for them.

They checked the last place they’d been seen: their house at the 18000 block of Ardmore Street near West 7 Mile Road and the Lodge Freeway in Detroit.

“It was completely empty,” Doughty said in 2019. “There was no car in the driveway.”

Doughty said she looked into the house through an open window.

“I could see only into the window in the kitchen, where you can see the dining room and part of the living area, where she usually has her pictures and coffee table,” Doughty said in 2019. “It was empty. There was nothing there besides a bottle of bleach in the kitchen. To be honest with you, I was pretty confused, so my mind wanted me to believe that maybe she did move and was going through a phase and didn’t want anyone to know.”

Doughty told Local 4 that wasn’t like Fox. The family contacted police, who let them enter the house to search with them. Doughty said there was no furniture and the house had been cleaned from top to bottom. She believed something happened at that point.

She said she checked the house next door and found a bottle of bleach in the living room. All of Fox’s clothes, candles, and pictures of her children were found in a church donation bin not far from the home.

Then-Detroit police chief James Craig said Kaylah’s father, Kevin Hunter, filed a missing person’s report for the three of them on June 6, 2014. An Amber Alert was never issued for the children. Detroit police said that’s because at the time of the initial report, the case did not meet the criteria for a statewide notification.

“The mother packed up and left her residence with her children, and so at that point, it hadn’t become an emergency situation. There was no idea that she was with the children. We just didn’t know. So it didn’t meet MSP criteria,” Craig said in 2014.

Fox’s family discovered her body beneath a tarp in a vacant home on Detroit’s west side on June 9, 2014.

Doughty told Local 4 that the family went into the basement of an abandoned home and found a door with a blue tarp underneath it.

“So my uncle lifts the door up and her body’s in the tarp. I could tell it was her. Her head was covered with a black garbage bag. Something black, it was covered with, and it looked as if he tried to cut her legs off. But I could tell it was her because she had a favorite pair of purple basketball shorts and she had those on,” Doughty said in 2019. “I couldn’t believe it at all, and even when they confirmed it was her, I said, ‘No, that’s not her.’ After that, I just immediately thought, ‘Where is Kaylah and Kristian?’”

Fox’s family believes she was having problems in her marriage. They suspected her husband, Erin Justice. Doughty said she believed Fox had asked Justice for a divorce because he had a history of infidelity. She believes he snapped and killed her when Fox asked for a divorce.

“Erin Justice was sentenced to 80 years plus and he hardly said a word,” grandmother Travea Fox told Local 4. “He’s just hush mouth. He won’t say anything.”

Jones was sentenced on Sept. 30, 2015, for being an accessory after the fact to a felony. Officials said he helped hide Fox’s body. He served six years in prison before being discharged.

Where are the children?

Doughty believes Justice killed Fox and has family or friends somewhere helping him hide the children.

“The reason I believe that is because we have recovered all of Alisha’s belongings — clothes, personal items, all of that. We have not (found) one item of the kids’ — not their bedroom furniture, their clothes, toys, anything. He took all of it,” Doughty said in 2019.

Jones said the children were alive when they left the Armore Street house the day Alicia Fox was killed.

The family set up a Facebook page called Bring Home Kaylah and Kristian, where they continue to get tips.

“Kaylah Hunter and Kristian Justice are still missing. If you have any information PLEASE SPEAK UP! No info is too small. They deserve to be brought home. They’re missed tremendously,” the family said in a Facebook post.

A family is holding out hope that missing children will be returned.

If you have any information regarding Kaylah Hunter and Kristian Justice, please contact the FBI at 313-965-2323 or submit a tip online. You may also contact The National Center for Missing and Exploited Children at 1-800-843-5678.

Why is ClickOnDetroit covering so many cold cases?

We’re working to bring attention to as many unsolved and missing persons cases from around the state as we can. Our hope is that getting this important information out to the public will help generate tips for investigators and potentially lead to closure for the affected families. If you have a cold case you’d like us to look into, please let us know by using the form below.