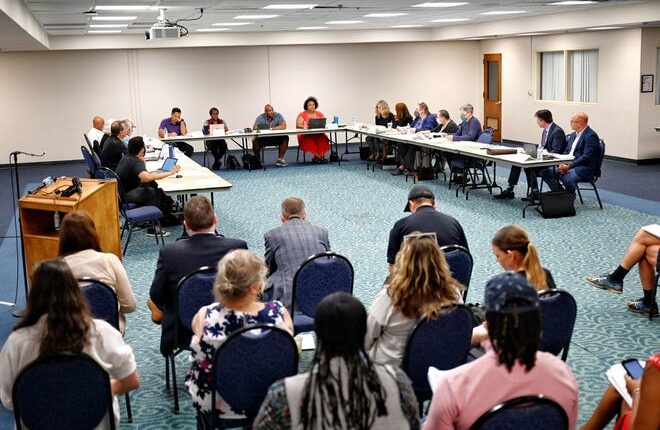 EAST LANSING — The police shooting in April of a Black man in the parking lot of a busy retail store is the most high-profile incident the relatively new East Lansing Independent Police Oversight Commission has had to address.

The commission, created in July 2021, was thrust into the spotlight in the days after the shooting that left one man injured and two officers on administrative leave.

“I think it’s really valuable to have an organization of people from the community to keep giving consistent attention to this issue,” said Commission Vice Chair Christine Root. “And that’s what the commission is.”

What is the oversight commission?

The city council in October appointed 11 commissioners, composed of a majority of minorities. No more than two of the commissioners can live outside East Lansing and none can be city or police employees, according to the ordinance.

The independent oversight commission is an advisory panel and has no decision-making authority. Any disciplinary decisions or changes in policy would be handled by the police department, city manager or the elected City Council.

The formal oversight commission was created after a temporary committee was established following protests over the high-profile excessive-use-of-force arrests of Anthony Loggins Jr. and Uwimana Gasito in 2019.

Commissioners range from Noel Garcia, a retired Lansing police lieutenant, to Robin Etchinson, who refers to himself as a reformed felon working to expunge two convictions for carrying a concealed weapon from decades ago.

What power does the oversight commission have?

“Well, that’s an excellent question,” said Commissioner Kath Edsall. “And not an easy one to answer.”

Up until April 25, the Commission’s activity was limited to collecting data and sharing it with the public through its meetings. There are two complaints the police department is currently addressing before it comes to the commission with them, she said.

“We’re just sitting kind of on our hands at this time,” Edsall said.

Edsall said one of the biggest roles the oversight commission played after the April 25 incident was to provide a forum for community members and commissioners to ask questions of the police department.

The police department reports every time a police officer pulls a gun, uses handcuffs or uses force in other ways. These are submitted to the oversight commission so it can work with the department to detail what exactly happened during each encounter.

These reports are included in the commission’s agenda reports, available to the public, and allow anyone to review police officers’ behavior, which Williams said he thinks is a good tool to increase civility.

The commission can also file a complaint that the police department must investigate, and report on the investigation to the commission, she said.

Etchinson said the commission can also recommend filing disciplinary and policy complaints and refer matters to the Michigan Commission on Law Enforcement Standards or other agencies.

“We can file complaints and disciplinary action, but ultimately, it’s up to the City Council to determine what type of police department that they’re going to tolerate,” Etchinson said.

Williams said every time a critical incident happens, like the shooting at Meijer on April 25, it opens a fissure in the system and allows people to look inside the machine of policing.

Such as police officers writing reports at the end of their shifts. The commission has not seen written reports from some of the officers involved in the April 25 shooting. Root said the commission is unaware whether Michigan State Police, which investigated the shooting before turning it over to the Michigan Attorney General’s Office, had received reports.

Police have Garrity Rights, which apply to the right of public employees not to be compelled to incriminate themselves by their employer based on the 1967 United States Supreme Court decision Garrity v. New Jersey.

So whether police are entitled to that or duty-bound to write reports is “going to be a bone of contention, I think, in the future,” Williams said.

She said two years ago City Council passed a resolution committing to review and reform policing policies in East Lansing.

“Maybe this is the time to take that seriously,” she said.

Etchinson said he would like to see the commission continue to dig, press, expose and bring forth transparency to the point where there’s actual accountability.

The change in the police department is going to take place from inside the department, but it’s only going to happen if there’s pressure from the outside from them, he said.

“And that is why it is so imperative that locally that we have this commission,” he said.