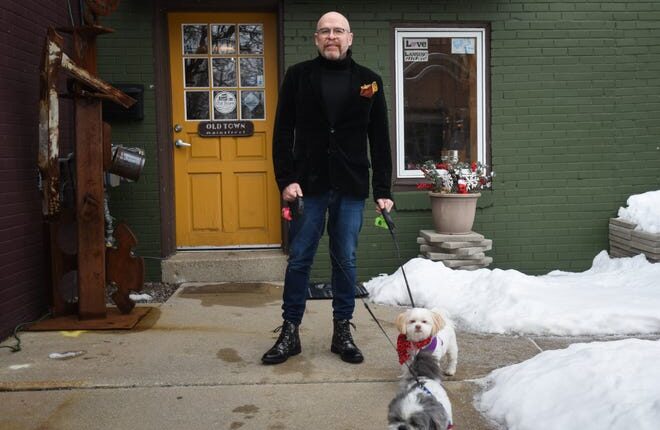 But that’s not what Robert Doran-Brockway thinks people need to know about him.

“People need to know that I need $120,000 for Old Town this year,” he laughed. “That’s what they need to know … If you’ve got some extra money sitting in the bank, please by all means give me a call.”

Doran-Brockway took on the new role for the nonprofit in January, which is dedicated to revitalizing Lansing’s historic Old Town district, after two years of focusing on his art and running for political offices.

Before that he worked in Owosso, where he still lives with his husband and two dogs, for the Owosso Historical Commission.

There he increased giving and revenues by 400%, increased museum attendance by 300%, activated two formerly vacant museums, helped pass a half-million-dollar millage for Owosso’s museums and parks’ capital improvements, and more, according to the Old Town Commercial Association’s January 2022 newsletter.

“The Old Town Commercial Association is very excited to have Robert leading the organization,” association president Ben Dowd said in a written statement. “The amount of passion and expertise that Robert is bringing to Old Town is a true asset to the businesses and entire community. We are looking forward to Robert being a guide to the OTCA board as we work through a new strategic plan and also the level of engagement with the folks in our community.”

Although he’s had quite the career, Doran-Brockway is thrilled to work for Old Town and described it as almost a dream come true. It is one of his and his husband’s favorite date night spots, where they take out-of-town guests, and where the men proposed to each other.

And now he’s working to make this community better, support the local businesses, take on a role that’s been vacant for over two years and help raise money Old Town needs after years without full events.

Doran-Brockway’s journey has had some real ups and some real downs, he said.

Yet he’s also led a blessed and vibrant life, seeing himself as a “glass half full” type of guy. He always moves forward, he said.

Doran-Brockway was born in the Washington Heights neighborhood of Manhattan, New York City. When he was old enough, he moved to Miami to live with his grandparents who offered to buy him a car and pay for college.

Growing up he wanted to be an opera singer and in Miami he performed with the Greater Miami Opera before moving to Boston to continue that career. Ultimately he decided to try something new and got a job as a receptionist for Career Blazers, which served Wall Street companies in New York. He moved his way up the ranks and went on to work for other companies like Tiger Information Systems and Advantage, LP.

The country was facing the AIDS crisis while he was working in New York. It was hard to watch friends die and he had to fight for their dignity. He sort of got sucked into activism, he said.

“Quite by accident I became quite involved,” he said.

He was also in his New York office when 9/11 happened. That’s when he started painting, using it as art therapy.

Outside the country, Doran-Brockway worked in Belize in Central America. He was an operations and dive director for Avadon Divers. The job was challenging as on any dive day there could be 26 people on the boat at all different skill levels going 70 feet under the water, he said.

“You have to have a staff of very highly trained people, because basically, these divers put their lives in your hands,” he said. “Listen, I’m not complaining. I was living in the tropics, and I was going scuba diving every single day, five days a week, sometimes six days a week.”

He decided to return to the United States after he met his husband, Robert Brockway-Doran, online. He visited him in November 2013 and then in 2014 moved to Owosso with him. After living in Central America for years he landed in the Michigan “tundra” during the polar vortex.

Nick Berry is CEO of Blue Owl Coffee, which opened a Turner Street location in 2019. He’s happy to have new Old Town leadership.

He said Dowd and the association board have been amazing during the pandemic but due to COVID-19, the coffee shop has yet to experience the full crowds Old Town typically draws during festivals and summers.

“This has been the longest soft opening I’ve ever had,” Berry said.

He said with the new leadership communication could improve. And he’d like to see a focus on building day-to-day activity in Old Town, not just festivals.

That’s what Doran-Brockway hopes to do. He’s working to meet all the local merchants, learn who the local players are, and learn how to help them thrive, he said.

In his Old Town office at 1232 Turner St. he has his own paintings hanging on the walls and vases he gilded himself. His dogs, Joey and Gizmo, are sometimes there with him and a photo of Doran-Brockway and his husband sits on the desk.

He’s also got a whiteboard full of events and critical issues for Old Town, including donor outreach, board building, volunteers and fundraising.

“Typically this organization has relied on events for their income and for sustainability,” he said. “Unfortunately, we haven’t had events here in two years, and we haven’t had an executive director in two and a half years. So we basically had almost no income in two years.”

But first and most important is establishing real working relationships with businesses, sending dozens of emails and writing grant applications for funds for the community.

“I hope that I can do right by this job and by this community. And that I can help them flourish and help lead the next however many years,” he said.