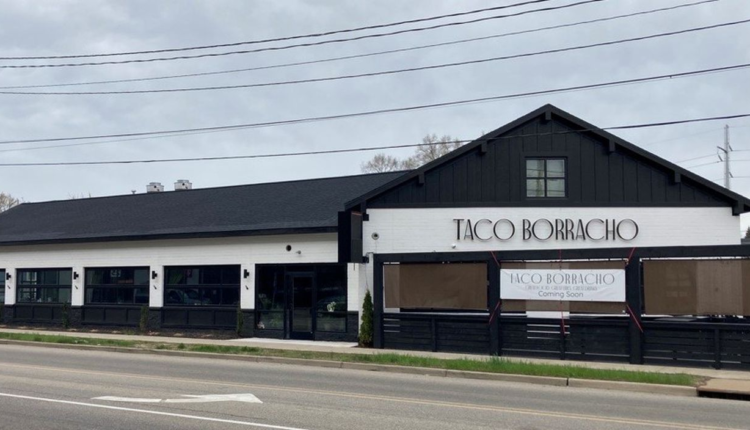 The restaurant, located in a renovated building that formerly housed a car wash, was created by Angel Gonzalez, a builder and developer whose work has primarily focused on the Belknap Lookout neighborhood.

“You’re going to love the food you get because it is truly authentic,” he said.

Taco Borracho hosted its grand opening Thursday, May 5, in recognition of the Mexican holiday Cinco de Mayo. The restaurant features a sleek interior with decorative lighting, a marble bar, and an outdoor patio.

Taco Borracho also has a full bar, including a selection of beer, wine, margaritas, tequila and more.

The restaurant is Gonzalez’s first foray into the food and beverage industry.

“I was looking for something to do — something different,” he said.

Gonzalez said so many people turned out for Thursday’s grand opening that Tacos Borracho ran out of food. He said there was a long line to get in, and some people, unfortunately, had to wait an hour or more for their food. A Facebook message posted Friday by the restaurant apologized to those who had long waits or weren’t able to be seated.

“We have a lot of work to do and are doing it,” the post says. “It was a long night for our team after we closed. We had some tears and emotions, but absolute determination to work out the kinks and we will.”

The restaurant pushed back its opening to 3 pm Friday because staff were awaiting the arrival of more food.

“We sold out everything yesterday,” Gonzalez said.

Despite the opening day hiccups, Gonzalez said he’s received a lot of positive feedback about the restaurant.

He said numerous customers told him, “What you did here was amazing. Michigan Street needed this.”

Detroit studies plan to reduce the fiscal ‘penalty’ of residency