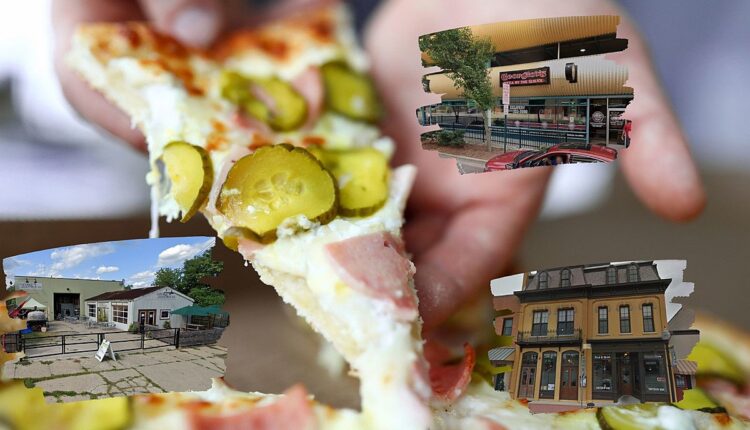 Pizza has to be one of America’s favorite foods. According to the Washington Post, Americans consume around 3 billion pizzas annually. That’s billion, with a b. 3,000,000,000 pizzas, which averages out to about 23 pounds per person, per year.

Now that’s a lot of pizza.

This probably explains why there is so much variety. First, you’ve got your standard fare; cheese, pepperoni, veggie, meat lovers, or some combination thereof. Then, you’ve got you’re slightly off-track toppings, like your BBQ chicken pizzas, spicy Hawaiian pizzas, and the like. Not to mention there are a variety of crusts and styles, like thin, Detroit, Chicago, and New York. Plus, different sauces to boot.

But then, you’ve some flavor combinations that really take the cake…like have you heard (or tried) this beloved pizza from Slice by Saddleback?

It’s called the Crab Rangoon pizza, and originally it was introduced as an option for those observing Lent this year (or people who wanted to try a new kind of pizza), and it did so well that now it’s on their permanent menu.

Slice by Saddleback isn’t the only place you can patron. If you want to step outside of your comfort zone and try something new, we found some awesome restaurants across the greater Lansing area that have some unique and interesting topping combinations.

Delicious Pizza in the Lansing Area

Take a look through the gallery below, and see what sounds yummy to you. If there’s something that sounds especially good, you might have to make some dinner plans soon!

Pizza has to be one of America’s favorite foods. As Americans, we consume around 3 billion pizzas each year, which evens out to about 23 pounds per person per year. And that’s a heck of a lot of pizza. With so many people eating so much pizza, of course, we’re going to see some awesome variety when it comes to toppings, from the standard to the wacky. If you want to step outside of your comfort zone and take your tastebuds on an adventure, check out some of these Lansing area restaurants that have the most unique pizza topping combos around.

East Lansing is a college town, home to MSU. And because of that, there are a bunch of young adults around town; living, working, going to school, and going out to the bar. That’s why East Lansing needs a 24-hour pizza vending machine like these ones in Jackson.