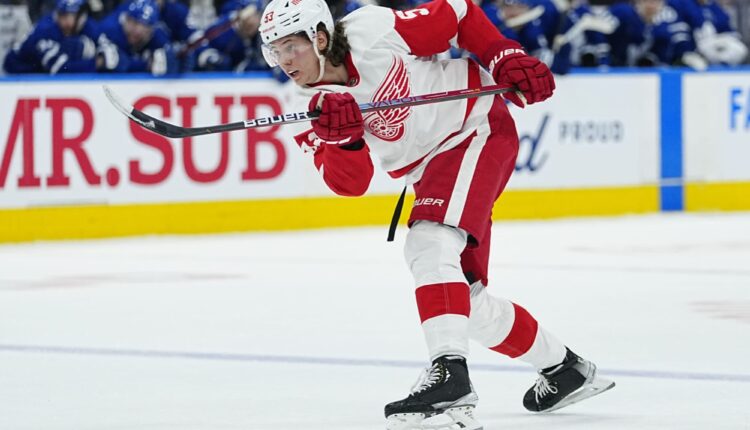 The Detroit Red Wings have a bright future ahead of them. While Lucas Raymond and Moritz Seider are at the forefront of this, Seider takes the cake. The league unveiled the finalists for the Calder Trophy award for the 2021-22 season, and Seider was one of them.

The 2021-22 season has come and gone, and Seider put on a quality performance on both ends of the ice and deserves the finalist nominee. However, it’s a bit unfair to Raymond and seems like a bit of a “snubbing” to leave Raymond in the finalists.

Michael Bunting of the Toronto Maple Leafs and Trevor Zegras from the Anaheim Ducks were also nominated for the award. Zegras has the flashy plays, and ESPN’s Top-10 playmaking ability, and Bunting has been a surprise addition to the Maple Leafs’ offense.

Seider is the odd one out here. He has provided plenty for the Red Wings’ offense but is also a solid performer in the defensive zone, something the Red Wings desperately need. The intangible that Zegras has is the flashy goal-scoring/play-making; Seider has the same when it comes to the reverse hits or big hits as well.

In 2021-22, Seider was able to log all 82 games for the Red Wings while boasting seven goals and 43 assists for a total of 50 points on the year. He was a true benefit to the Red Wings’ offense and was able to help boost the scoring, a much-needed area of ​​improvement.

On top of that, Seider’s defensive zone abilities were also beneficial to the Red Wings. As was mentioned above, he’s already making a name for himself with his ability to counter-attack the opposition when they try to knock him over.

Seider is in the running for the Calder–yeah, but the odds of him winning it are not as high as you would expect. The goal-scoring and play-making abilities of Zegras are going to end up swaying the voters, but time will tell.

The two-way prowess of Seider may be enough to win some of the votes back over Zegras’ lacrosse-style goals.

Dan Campbell on lack of prime-time games for Detroit Lions in 2022: ‘It’s superior’