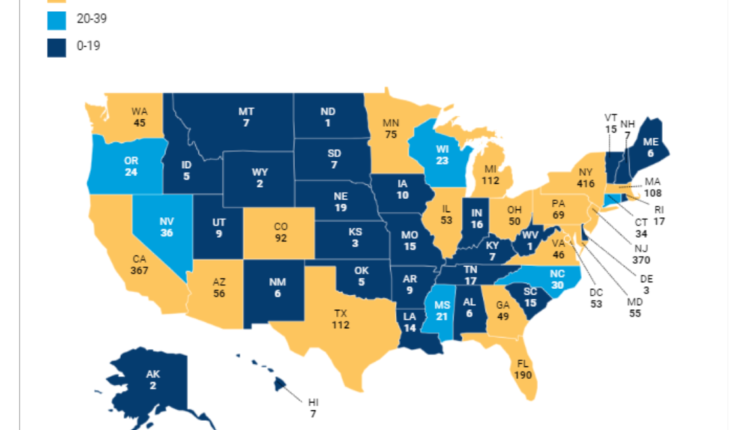 Michigan had the fifth-highest number of reported antisemitic incidents in 2021, according to a new report from the Anti-Defamation League (ADL).

The United States reported an all-time high of antisemitic incidents in 2021 according to the audit, with 2,717 incidents reported – an average of more than seven incidents per day and a 34% increase over 2020.

There were incidents in all 50 states and the District of Columbia, but Michigan had the fifth most with 112 reported incidents, tying with Texas. The ADL said that Michigan saw a 120% increase in incidents between 2020 and 2021.

Michigan’s incidents took place across 32 cities, including the neo-Nazi group Folksfront spread ing “extremist” propaganda all over the state, a swastika formed from wood chips in Birmingham and a Jewish restaurant owner receiving threats and anti-Israel reviews on social media after posting his support for Israel.

The four highest states were New York with 416 incidents, New Jersey with 370 incidents, California with 367 incidents, and Florida with 190 incidents.

Combined, the states account for 58% of the total incidents.

Antisemitic incidents tracked include assaults, harassment and vandalism, ranging from Jewish diners at a restaurant in Los Angeles being attacked by a group carrying Palestinian flags and yelling slurs to an individual throwing a glass bottle at a Jewish girl as she got off a school bus while yelling, “F–king Jew.”

There were no deadly attacks against the Jewish community in 2021, ADL said.

Reported antisemitic incidents surged 141% in May 2021, when the conflict between Israel and Palestine grabbed the nation’s attention.

Attacks on Jewish institutions, like schools and synagogues, increased 61% since 2020.

“The ADL’s latest report reveals what we all know to be true: the scourge of antisemitism continues to threaten Jews across the United States,” Levin said. “Whether worshiping in their synagogues, frequenting their local Jewish Community Centers, attending Jewish schools or just walking down the street, Jews face growing threats and hostility.”

“I am grateful that the Senate finally confirmed Deborah Lipstadt as Special Envoy to monitor and combat antisemitism around the world. This report reaffirms in the strongest terms how much work we have to do at home, as well,” Levin said. “I urge my colleagues to reconcile with the findings in this report and recommit to calling out antisemitism in all its forms – loudly and consistently. We must continue building coalitions, both within Congress and beyond, to fight antisemitism and battle all forms of hate, ignorance and bigotry.”

Man charged with murder after stabbing brother to death in Detroit, officials say