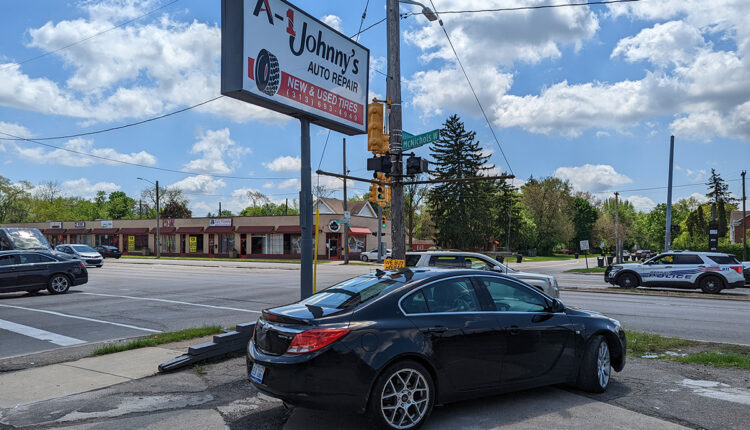 The Detroit Police Department wants to broaden its use of technology capable of pinpointing vehicle makes and models – and even the presence of bumper stickers – to solve crimes.

The city last month began soliciting proposals for the installation of vehicle recognition sensors at 75 intersections. The technology, to be funded with federal American Rescue Plan Act dollars, will be used citywide to collect data on any vehicle, traveling in any direction within the designated areas.

The data will be “immediately uploaded, analyzed and available,” to operators at the city’s Real Time Crime Center at Detroit Public Safety Headquarters, the city’s request for proposals notes.

Rudy Harper, a spokesman for DPD, told BridgeDetroit that the video footage and still images captured can help point police officers in the right direction following a violent crime. But the expansion has already garnered some objections from Detroit police commissioners who have raised the prospect of civil rights violations and the need for a policy for how it will be used.

The vehicle recognition software will allow crime center analysts to search by geographic area and by the make, model and body style of vehicles. It also can detect the presence of racks or bumper stickers as well as vehicle history.

Some Detroit Police Commissioners have raised alarms over other surveillance technologies the department has incorporated in recent years and said DPD should be cautious if it adds more.

“We need to have policies that are going to protect our Detroit residents physically, but also protect our civil rights and ensure that those rights are not violated,” said Burton, adding this type of technology “doesn’t make anyone safer.”

BOPC adopted a policy for the use of facial recognition technology in 2019, about a year and a half after Detroit police first began using it. The controversial software was met with calls from the public to ban it, arguing it’s racist and known to misidentify individuals. The rules adopted by the board removed provisions that allowed facial recognition to be used to scan faces in real-time in the event of a terror threat and laid out penalties for officers found to abuse its use.

Police Commissioner Linda Bernard, who represents District 2, as well as Burton argue that ARPA dollars shouldn’t be used for policing or vehicle recognition equipment. Spending COVID relief funds on surveillance equipment is a “waste of our money and our time,” Bernard said.

It’s unclear how much of the $50 million that the city allocated to the “public safety” ARPA spending category would go toward the sensor system.

“The dollars going into (surveillance technology) need to be reallocated and redirected into social justice programs that are going to help uplift our community,” Burton stressed.

Bernard said federal funds should be directed toward recruitment, community relations and for youth programs.

“We do not need a vehicle recognition software system, we need additional police officers,” she said.

Police Commissioner Willie Bell, who represents District 4, has been a proponent of the police using technology that makes their job easier.

“Just like people get their phones updated to be current with the technology and all that stuff that’s connected in their household, police should be doing that with crime fighting tools,” Bell said.

“I don’t see anything wrong with police using vehicle recognition because they are just tracking a car or a motorcycle, not an individual person,” he said. “They are quite different when you look at it that way.”

Harper declined to release the proposed locations for the sensors, noting they are preliminary and subject to change or expansion. DPD, he said, is gathering violent crime data and input from each police precinct to determine where they should be placed.

A list of the proposed sites are included on the bid portal for the City of Detroit’s Office of Contracting and Procurement. Among the areas noted are multiple sections of Greenfield at McNichols, Seven Mile and Puritan, the Southfield Freeway Service Drive at Warren and the Lodge Service Drive at Greenfield. Others include Alter and Mack, Grand Boulevard and Linwood, Chalmers and East Outer Drive and Woodward Avenue and Seven Mile.

DPD doesn’t have a timeline yet for when the technology will be installed. The city is accepting proposals through Thursday and will release more details following the deadline, Harper said.

When the city chooses the vendor to supply the services, Burton said, that company should conduct outreach to educate Detroit communities about the technology.

“We don’t even know who is working for these companies and what sort of biases they may have,” Burton said. “They want to come in here and install cameras and microphones in our Black neighborhoods, so they should be answering to us as well.”

Bell, on the other hand, isn’t concerned with the third-party companies the city does its business with because “technology and resources come from a worldwide market,” he said.

Detroit police have already been using license plate reading cameras for more than a decade, and are  involved in a pilot program with Flock Safety cameras. The Atlanta-based public safety technology firm provides vehicle recognition cameras to about 1,400 cities across the country, including in Detroit. Flock also offers a gunshot acoustic system similar to Shot Spotter, which Detroit police are using in the city’s 8th and 9th precincts.

Beyond vehicle recognition, the city has 260 cameras installed at intersections to monitor traffic flow and pedestrian safety. That service is being provided through Ontario-based Miovision.

Georgette Johnson, a spokeswoman for the Department of Public Works, said the city has spent about $2.5 million since 2018 to install, maintain and operate the Miovision cameras. Detroit put in 137 of the cameras in 2022, and 14 more installations are planned.

Detroiter Mario Williams owns Holy Moly Donut Shop on Cadieux and East Warren, one of the potential intersections where the cameras could be installed, said he’s completely against it.

“It’s just getting out of hand with the invasion of people’s privacy,” Williams said. “What’s next? Are they going to have drones out here patrolling people?”

Williams believes beefed up police presence would be a better use of the department’s resources.

“Just have a few extra cars patrolling the area during the hours when kids are walking from school,” he said. “We don’t need to have equipment like this watching people all the time.”

But Johnny Jaden, owner of A-1 Johnny’s Auto Repair Shop on McNichols and Evergreen, another location where police are interested in installing vehicle recognition cameras, is in favor.

Even though he hasn’t noticed a crime problem in the area, Jaden said he’s aware that it’s prevalent in Detroit. He doesn’t see why anyone would be against police having better tools to fight crime when it does occur.

“If the police want better cameras and more equipment here, I have no problem with that,” he said. “The only people who are really worried about it are probably people who are involved in crime or had bad run-ins with the cops.”

Kayleigh Lickliter contributed to this report.

authored by
First published at https%3A%2F%2Fwww.bridgedetroit.com%2Fdetroit-cops-to-deploy-more-cameras-to-id-vehicles%2F