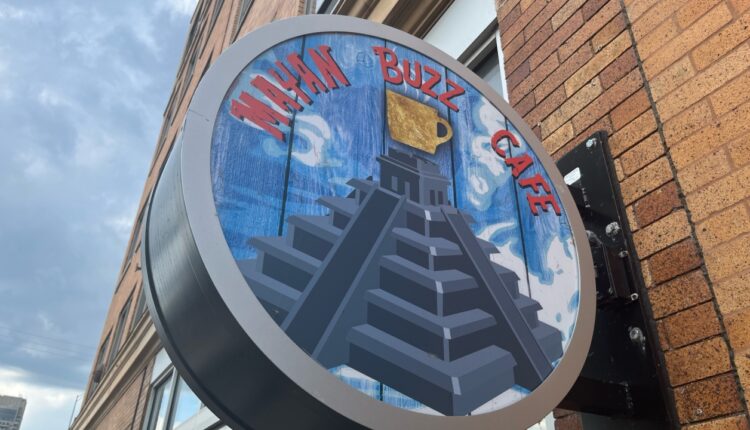 GRAND RAPIDS, Mich. (WOOD) — The owner of a Grand Rapids café accused of not paying rent for more than 20 months is closing up his West Side shop.

Marco Bulnes announced on his Facebook page Wednesday that the original Mayan Buzz Cafe at 208 Cesar E. Chavez Ave. south of Cherry Street SW will close as of Friday.

“I mean, it’s been a great eight years or so at the downtown Grand Rapids location with Mayan Buzz Café. Unfortunately though, at the same time just as new life comes along… and the changes that happen in our lives and our environment and everything else, it has become too expensive for us to be there,” Bulnes said in the Facebook live video he made while walking on a Grand Rapids trail.

Bulnes said rent is more and the building has a new owner and landlord. City property records confirm Raider Development LLC sold the property containing Mayan Buzz Café to City View Flats LLC for $3 million on May 23. However, the president of BBG Corporation, which owns City View Flats, says Mayan Buzz’s rent rate has remained the same for the past two years and bills have gone unpaid.

“During the 3 months of my ownership of the building, Marco has not paid any rent – ​​just like the prior 18 or so months with the prior owner,” BBG Corporation President Brian Gardner stated in a Thursday email to News 8.

Gardner said he met with Bulnes regarding his back rent bill in early June and told Bulnes he needed to stay current with his payments or he would have to move out of the building. Gardner said Bulnes gave him a check for June rent, but that check bounced. Gardner said Bulnes has refused to meet with him since then to discuss the situation.

“This is not the story of escalating rents, difficult economic times, etc.,” Gardner stated in the email, adding that Bulnes could curb his expenses by working in his own store instead of relying solely on employees to operate the shop.

In addition to mounting expenses, Bulnes blamed industry changes prompted by the pandemic and called out the government for how it distributed Paycheck Protection Program funding.

“I will tell you as a business owner that lately, as of after COVID, it has been almost impossible, impossible to be able to be open the same hours that you were open before. It has been impossible to have the employees needed in order for you to keep moving forward. It has been such a difficulty throughout to be able to just make it, just barely make it. And sometimes we don’t, and it’s OK,” Bulnes said in the Facebook post.

“This is not the case of the ‘hardworking little guy’ suffering in down times,” Gardner disputed. “If that were the case, Marco would have reached out to me to try to work something out instead of ducking me for the past month and trying to gin up misplaced public sympathy. ‘Hardworking’ clearly does not apply. Moreover, he would have definitely made sure he paid his employees who are much more the ‘little guy’ than he is.”

News 8 tried to reach Bulnes at his Grand Rapids café, but has not yet heard back.

In the Facebook Live post, Bulnes said one employee complained on social media about not getting paid. Bulnes claimed the employee was fairly new to the business and a week was missing from his paycheck, but said, “It got taken care of. The ability to know what has happened is there, and the fact is that we have a plan to make sure it does not happen again.”

Bulnes also said employees at the Mayan Buzz Café that’s closing “do have the ability to go work at the other stores without any problem.”

Mayan Buzz previously had another location at 507 Bridge St. NW, which was owned by Walt Gutowski Jr. at the time.

Gutowski says “there were a lot of issues” with the business, which operated there for two to three years before closing about 18 months ago.

“It was difficult, but really nice people though,” Gutowski said.

News 8 attempted to contact the owners of the three other Mayan Buzz Café locations, but had not heard back as of close of business Thursday.

Bulnes said his other Mayan Buzz locations will remain open and he will be “adjusting the stores according to the changes that are necessary.” He also commented on his Facebook Live post, stating Mayan Buzz would be “adapting into the new wave” of coffee shops that are smaller with a drive-thru. Bulnes said he will hold off on coming back to Grand Rapids, but he plans to go to Holland, Muskegon and other areas.

“Being a small business owner is not easy, it’s not easy. But when you love what you do, when you are passionate about your employees and passionate, you have a purpose about what you’re going to do, then it becomes a situation that it’s almost addicting to go ahead and keep going, no matter what . Believe me, I’ve been told to quit, many times. It’s not going to happen anytime soon,” Bulnes said on Facebook.