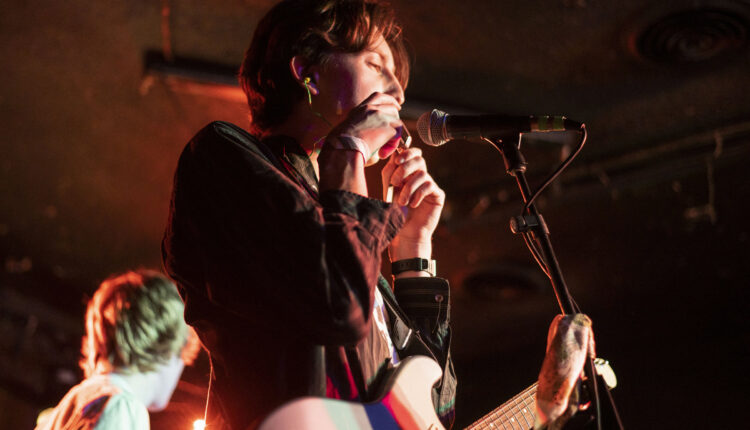 Luna Pier is a band to watch out for

Editor’s Note: A Daily staffer performed at this concert, but they were not involved in the creation, production or publication of this piece.

Punk-infused indie-rock band Luna Pier may have formed this past August, but they’re far from novices when it comes to the local Ann Arbor concert circuit. In fact, the Ann Arbor and Detroit-based band has already played at beloved local venue The Blind Pig four times since their inception last summer. The multi-talented group consists of LSA sophomores Dexter Kaufmann on guitar and Alex Calderwood on drums and piano, recent UM transfer Marcus Hoh on rhythm guitar and Wayne State junior Joey Shuster on bass. In an interview with The Michigan Daily ahead of a performance at The Blind Pig, the musicians discussed how they came to be Luna Pier:

“We were roommates,” Kaufmann said, motioning to Calderwood, “and then I was in another band with Joey for a while,” Calderwood continued. “I just joined a little bit ago, in October,” Hoh added.

Kaufmann, Calderwood and Shuster first played under the name Groupchat at last year’s Artscapade, the annual Welcome Week event run by Arts at Michigan and the University of Michigan Museum of Art (UMMA). Eventually, the trio settled on Luna Pier, a name that comes with a story.

Calderwood explained, “I took a drive down to Toledo to get some Waffle House just to do it. It was storming so bad on the way back I had to pull off the road, and I pulled off in this town called Luna Pier because it had a cool name.” He added, “It’s right on the lake, and the fog was rolling in, and it was amazing, the perfect atmosphere, and I was thinking about the name on the drive back and was like, ‘You know what, that’d make a really good band name.’”

Thanks to Waffle House, Luna Pier came to fruition and has been busy ever since. The patchwork quad has named both alternative-rock band Ween and free-form rock chameleon Frank Zappa as influences for their sound, an eclectic mix of contemporary indie and energetic punk-rock. It’s the kind of music perfect for house shows and tight-knit local venues. When asked what they love most about these intimate performance settings, Luna Pier praised the sense of community within the Ann Arbor music scene.

“It’s really a community-driven place, you know? It’s people from the community playing for members of the community. It’s got the nice energy of just being up here and playing for your friends,” Calderwood said.

In praise of The Blind Pig in particular, Shuster shared, “My favorite part of this has been the sound guy … He’s fantastic. He took the time to mic up my cabinet and take a direct signal from my amplifier, which never happens with most sound guys.”

This aforementioned attention to detail and warm atmosphere felt palpable on the night of Luna Pier’s Feb. 5 performance. The night began with LSA sophomore Aneesa Sheikh, whose country-pop flair and cover of Dolly Parton’s “Jolene” were met with an enthusiastic response from the crowd.

When Luna Pier finally took to the stage, they began with an electric rendition of DEVO’s “Uncontrollable Urge,” a headbanging introduction into what would be a dynamic set. Between an array of punk-inspired originals, the group interlaced elements of indie-rock and even country into their repertoire. The song “Jewish Cowboy” proved to be a highlight, mixing twangy instrumentals and zany storytelling over harmonica accompaniment from Kaufmann.

They covered Harry Nilsson’s “Coconut” and My Chemical Romance’s “Teenagers” in an unexpectedly perfect closing, solidifying the group’s ability to hop from genre to genre with ease. It’s obvious to any onlooker that Luna Pier knows how to have fun on stage, feeding off each other’s energy during performances and eager to let their audience in on the good times too.

Luna Pier is an exciting addition to the Ann Arbor student music scene with an undoubtedly bright and raucous future ahead of them.