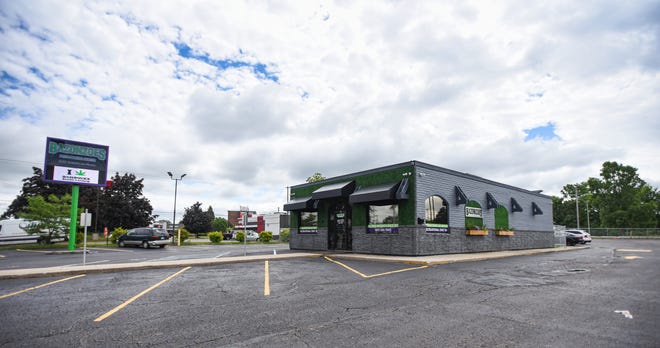 LANSING — Inside the sea of ​​retail, almost casual restaurants and more lining South Cedar Street in Lansing, a new type of business is coming: the city’s first drive-thru cannabis dispensary.

Bazonzoes Provisioning Center, a Lansing-based cannabis company, will open a recreational dispensary Friday at 920 American Road on the city’s south side. In addition to the store’s indoor retail space, customers can order products on the store’s website ahead of time and pick up their order from their driver’s seat.

The location will be Bazonzoes’ second in Lansing and third overall, along with its 2101 W. Willow St. recreational dispensary and medical provisioning center near the city’s Old Oakland neighborhood.

Opening a store with a drive-thru had been a goal of Anthony Virga, the company’s president and founder, for years. The new store’s building — once a Del Taco restaurant, he said — made for an ideal spot once securing the city and state’s blessing.

It also bolsters worker safety, Virga said, as customers receive their product by handing their photo ID through a window, before receiving their purchases through a metal box by the window.

Virga said there may be a learning curve getting the drive-thru up to speed, but he’s excited for how it will change the business’s workflow.

“Everywhere around us has drive-thrus, so it’s just like a perfect fit to come on through,” he said. “We’ve been so good at our curbside at our other two locations. It’s kind of the same process, we just don’t have to go outside.”

State workers:Should the state bar its employees from recreational marijuana use?

Virga started Bazonzoes — named after his childhood pet fish — as a medical provisioning center in Walled Lake in 2010. It was the first of its kind serving medicinal card holders in Oakland County, he said, after state voters passed the Michigan Compassionate Care Initiative to legalize medical marijuana in 2008.

He’s a medical cannabis user himself — to treat his ulcerative colitis — and Virga said it’s a joy to help relieve someone’s pain.

In the business’s first five years of existence, Virga said, police raided them three times, taking such things as their products and their cars. The second time, Virga said officers raided his and his business partner’s homes as they slept.

Each time, however, Virga and his colleagues won their civil forfeiture cases in court and reopened the business anew.

“Every time they raided me, I did what I had to do to gather myself back together and reopen,” he said.

Friday’s grand opening event will be a “Purple Carpet Premiere,” according to a press release. It will feature vendors, giveaways, games, discounts, a DJ and a performance at 4:20 pm by Lansing hip-hop and soul artist MikeyyAustin.

“We’re going to be giving away a lot of stuff. You’re not leaving here without something for free,” Virga said.