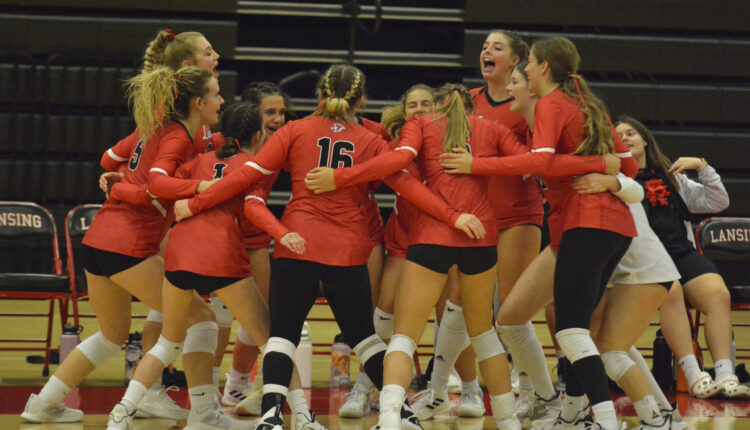 In a field that includes private school powerhouses St. Thomas Aquinas (35-3) and St. James Academy (33-3), no. 7-seed Lansing (26-8) won’t be favored to win the Class 5A volleyball tournament.

But the 2021 state champions certainly know what it takes.

The Lions also know what it’s like to be doubted.

The graduation of six seniors along with the departure of head coach Lindsay Zych brought uncertainty to the program.

“I think we were just driven by the doubt,” said senior Taelyn Jones, whose parents, Kim and Jason Jones, stepped up to take on the head coaching responsibilities.

“Everyone knew that this team was going to be completely different. The stakes were different. Everything changed, the program completely. I think we just wanted it so bad this year because of that, for sure. We’re just glad to be here and we’re excited for the tournament and have high hopes.”

Despite returning just two starters in Jones and senior Skylar Weaver, Lansing finished the regular season 24-8, good enough to host a sub-state tournament as the No. 4 seeds in the East.

The Lions then swept Sumner Academy Saturday in the sub-state finals to qualify for the state tournament.

“We definitely surprised everyone because this year everyone doubted us and didn’t think that we were going to win but we came out strong,” Weaver said. “I’m actually really proud of us.”

The state tournament begins Friday at the Tony’s Pizza Events Center in Salina.

Pool 1 features no. 1 St. Thomas Aquinas, no. 4 Andover Central, no. 5 Hutchinson and No. 8 Bishop Carroll.

The top two teams in each pool advance to the semifinals on Saturday.

Before last season, a private school, either Aquinas or St James, had won four straight 5A state championships.

This is Lansing’s 24th state tournament appearance and eighth straight trip (all in 5A), a streak that began in 2015.

“You just want to win for the girls and get them back there (state tournament) and let them have that experience,” Jason Jones said. “There’s going to be no pressure and just go play as hard as you can and let the chips fall where they may. Hopefully, we’ll find a way to get to Saturday and go from there.”

“It’s a testament to the kids,” Jason Jones said. “They’re used to winning. No credit to us coaches. They were going to find a way to do this, no matter who coached them.

“I think it helped that we already have relationships with all of them. We teach in the building and I have them in the weight room. We already knew them, so we could really focus on the volleyball part.”

The Lions open the state tournament Friday at 4:30 pm against St. James.

“I think the most important part is going to be our energy,” Weaver said. “Our whole practice this week we’re going to be loud and energetic and that’s going to push us forward to state. I think we’ll do well.”

Sticking together will also be important.

“We’re definitely focusing on playing as a team and just keeping our heads up,” Lansing senior Jessi Ritchhart said. “We know we can play and we’re going to play our hearts out.”