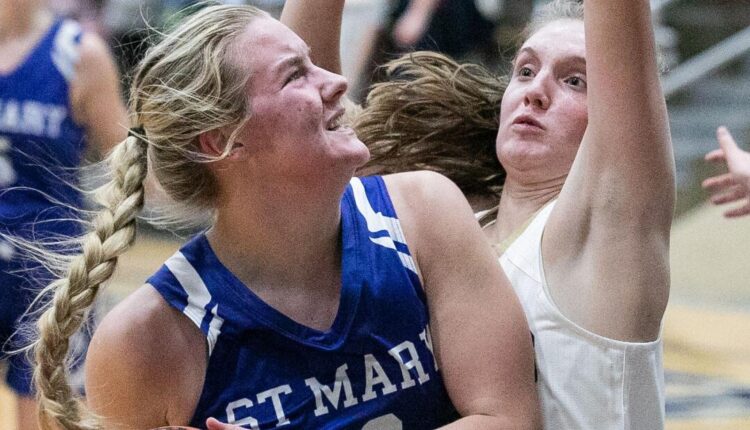 “We have a lot to work on,” TCSF coach Adam Warren said. “It was our first game. We played against a feisty team tonight. So from that perspective, it was nice to play against them and now we can go to practice tomorrow and figure out what we can do to change some things.”

Going into the fourth quarter, the Eagles had a two-point lead, but the Gladiators received contributions from junior Adrianna Spranger (10 points and four rebounds) and Gwyneth Bramer (seven points, six rebounds, three assists and five steals).

Part of the reason the Eagles sustained a fourth-quarter lead was because of Audrey Smith’s team-high 11 points and seven rebounds. Kyla Barnowski racked up eight points, Sarah Bunek had seven points and Leah Fleis collected six points and a team-high nine rebounds.

The Eagles began to turn the ball over late, which cost them in the end, but the Glads had the same issue throughout the game. Warren sees that as an issue the team can fix before their next game Friday at Cadillac.

Nevertheless, Warren was happy to see the team start the season at home on the right foot.

“In general, we have a strong leadership group,” He said. “Our team is made up of five seniors and five juniors, who all like each other. They all play hard for each other, and they know their roles so collectively that’s probably why they are going to have success this year.”

An emphasis before Friday’s matchup is to crack down on the turnovers, but aside from that, he’s was happy to see some of the girls step out of their comfort zone and score on Tuesday.

“It’s one of the biggest things we had to work on — we had two or three strong scorers,” Warren said, “We need to have 10 people willing to get out of their comfort zone and look to score. It’s something we’ve certainly been working on, and Allee did her part today.”

Despite having a team with a majority of returners from last season’s postseason run, Warren still finds ways to make sure the team is still learning new things every day, but having an experienced team also creates a sense of understanding about the mission.

After watching the TCSF fall sports dominate from afar, Warren noted being competitive is what comes with being a part of a school like St. Francis.

“I think that’s a culture within St. Francis; the expectation is that you are going to be competitive, so it doesn’t matter if it’s golf, football, tennis or basketball,” Warren said. “They have high expectations in the classroom and sports. So it’s not something I have to focus on or compare us against. That’s just the mentality and expectations.”

The Glads will have two more teams to face — Cadillac and Rudyard — before starting their journey to capture a Lake Michigan Conference title. Their first conference game is Dec. 9 against Boyne City (1-0).

UP NEXT: Trojans (2-0) travel to Mancelona Dec. 7 for their Ski Valley Conference opener. The Mustangs (0-1) ride to Benzie Central (1-0) Friday.