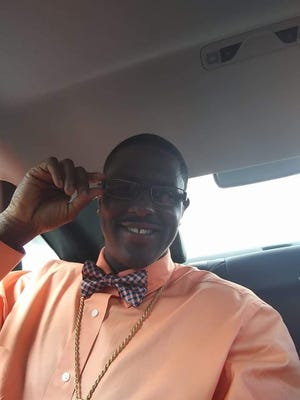 LANSING — Marquise Manns Jr. knew from a young age what he wanted in life.

The 30-year-old semi-professional football player wanted to work, be successful, then go home to his family, said Jasmine Glasscoe, who has been friends with Manns since high school.

“His family was his first priority,” Glasscoe said. “There aren’t many men out there like that.”

Manns was killed just before 4 on July 3 in the 1200 block of Shepard Street after being struck by a vehicle. Police say they believe he was intentionally struck before the driver fielded the scene, according to a news release.

Information from witnesses suggests Manns, the driver of the vehicle and several others were involved in an argument before he was fatally struck, the police said.

Police used dogs to track the man accused of driving the vehicle that struck Manns and found him a “short distance” from the scene of the crash.

Andrew Coleman, 32, was later charged with murder in connection with Mann’s death.

Glasscoe said the night Manns’ died, he was defending someone. She loves him for that, but is angry too, she said.

“You’re always trying to save somebody, but nobody was there to save you that night,” Glasscoe said. “All over something so small.”

The last time Manns texted her, he told her he loved and missed her.

“I still hear those words because I know he meant it,” Glasscoe said. “He want to be there for you every day. That man loves who he loves and he holds them close.”

The morning after Manns died, Glasscoe went to Shepard Street to talk to her friend. She felt his blessing and felt him tell her everything was going to be OK.

Manns adored his 3-year-old daughter, Morgan, and was close with his mother, Glasscoe said.

Glasscoe said she knows she’ll be around to help take care of Manns’ daughter and mother. He would’ve done the same thing if she had died first, she said.

Sports was Manns’ main interest aside from his family, Glasscoe said. He loved basketball and football and played quarterback for the Lansing Crusaders, a semi-professional football team in Lansing.

“Our Lansing Crusaders family want to take the time to send condolences & prayers to our brother who lost his life this morning #5 Qb Django Marquise manns we will miss you brother you always made us laugh had a great spirit prayers for his family,” the team posted on Facebook.

LaVelle Watts, Manns’ cousin, said she remembers her cousin being vibrant, hyper and full of life. He was always respectful, especially of older family members.

Watts said Manns was an excellent father and was a family-oriented man.

“He definitely was a ray of sunshine. He was a very positive, upbeat person,” Watts said. “He made his mother proud. … I am glad he was able to leave his legacy behind with Morgan.”

She said she is sad because she believes two men lost their futures on July 3, Manns because he was killed and Coleman for his alleged role in the crash.

Manns’ family created a fundraising page for funeral arrangements and to support Morgan.

“I hope that the vibrant person he was can be an example to others,” Watts said. “Regardless of what life throws at us, still find it in yourself to smile, to be friendly.”