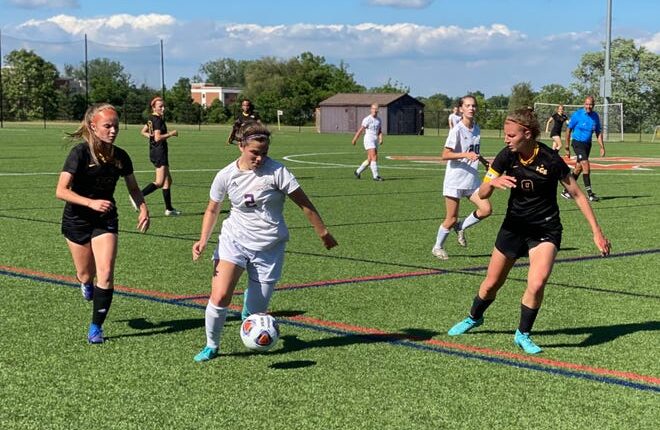 PORTAGE — Mia Judd and the Lansing Christian girls soccer team had a plan.

And for the most part, that plan worked during their top-10 showdown against Kalamazoo Christian in a Division 4 regional semifinal.

The No. 3-ranked Pilgrims spent a majority of time bending but not breaking against the pressure it faced throughout Tuesday’s contest at Portage Northern.

But the one time they broke proved to be the difference as Lansing Christian had its season end with a 1-0 setback in overtime to the No. 7-ranked comets.

Kalamazoo Christian got a goal just over 2 minutes into overtime while advancing to Friday’s regional final.

“We knew that they do a really high press and they press really well together and they like to pin teams deep,” first-year Lansing Christian coach Tommy Ziolkowski said. “Our whole game plan was to sit in and bend but not break. Eventually we ended up breaking. That’s soccer.

“We were looking to catch them on the break. We have some pace up top that I don’t think they were ready for until they saw it and they dealt with it. We did everything we could. They just were a little better today .”

Lansing Christian had his best opportunities in the second half to counter and try to break the scoreless tie. Judd, who scored more than 50 goals this spring, and the Pilgrims failed to break through on those instances while closing the season with an 18-3-1 mark.

“Our whole game plan was to play around that first line of pressure (from Kalamazoo Christian),” Ziolkowski said.

“When we were able to do that, we had plenty of moments where we could have nicked a couple. Again, it just wasn’t our day in front of the goal.”

Ziolkowski was proud of how the Pilgrims battled Tuesday and gave themselves an opportunity to keep their season alive.

And Judd was pleased with what Lansing Christian accomplished this spring.

“I’m really proud of our team,” Judd said. “At the beginning of the year there were a ton of new girls and we came together as a team and encouraged the younger girls. There was a lot of leadership throughout and we built each other up to become one strong team, which allowed us to compete with many teams, including Division 1 schools and we won the GLAC and districts.”