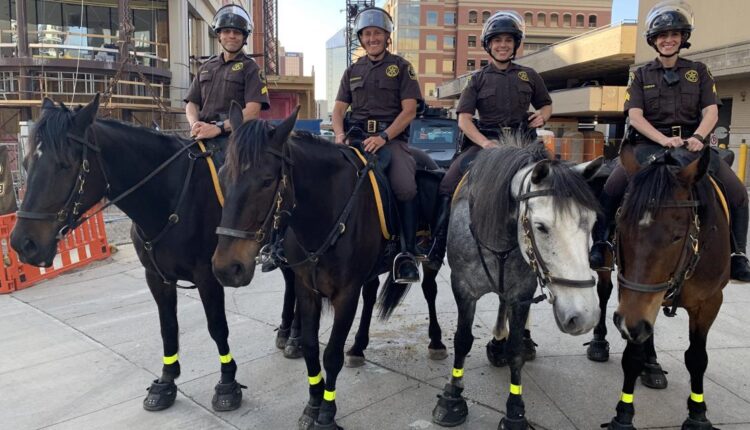 The horses need to be acclimatized to different scenarios a deputy may need them for, and many of those can’t be recreated at the training facility.

GRAND RAPIDS, Mich. — The mounted unit of the Kent County Sheriff’s Office isn’t a new thing, but many aren’t used to seeing them in downtown Grand Rapids.

No, the office hasn’t been hit hard by high gas prices. They were spotted in the city as part of a training exercise.

“We’ve actually been around since 2007,” says Sergeant Joy Matthews.

What is the benefit of a horse? For one, search and rescue can be made easier.

“If we do have a missing child, we can get into places where cruisers or bigger vehicles can’t,” explains Matthews.

Visibility is also a plus, as the unit often patrols at large events where cars aren’t feasible.

“If someone does need help or need police assistance, it’s very easy for them to see us,” says Matthews. “We really do stand out.”

When the unit was spotted on the southeast side of Grand Rapids, a social media post sparked conversation about the unit online. Matthews says it was all just a training exercise.

The horses need to be acclimatized to different scenarios a deputy may need them for, and many of those can’t be recreated at the training facility.

“Streets and bicycles and baby strollers. Things that normally horses would spook at, just because they’re unfamiliar with,” says Matthews. “We want them to kind of get familiar with those types of items or those types of things.”

That includes people, so the Sheriff’s Office highly encourages you to come meet the horses.

“When they see us out and about on the streets, just say hi and kind of get to know us,” says Matthews.

Some online speculated the horses were part of over-policing on the southeast side of town. Matthews says that is not true, and that the Sheriff’s Office was not asked by the Grand Rapids Police Department to patrol any part of town.