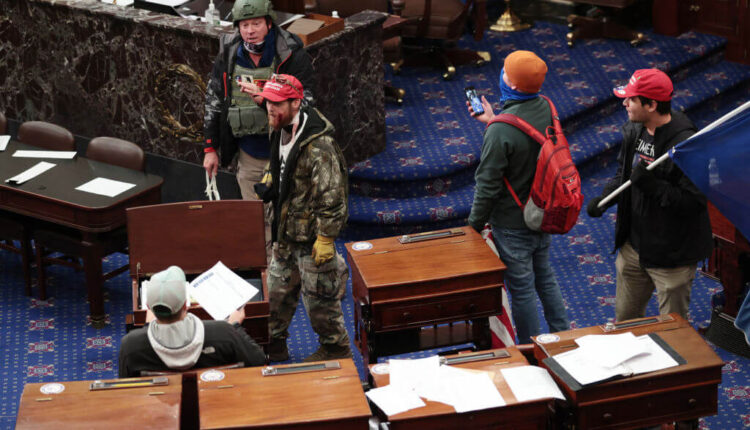 WASHINGTON — The U.S. House committee looking into the Jan. 6 attack on the Capitol sent letters Monday to Reps. Andy Biggs of Arizona, Mo Brooks of Alabama and Ronny Jackson of Texas, asking them to share information about meetings and conversations they had in the days and weeks leading up to the insurrection.

“The Select Committee has learned that several of our colleagues have information relevant to our investigation into the facts, circumstances and causes of January 6th,” Chairman Bennie G. Thompson, a Mississippi Democrat, and ranking member Liz Cheney, a Wyoming Republican, said in a statement.

“As we work to provide answers to the American people about that day, we consider it a patriotic duty for all witnesses to cooperate. We urge our colleagues to join the hundreds of individuals who have shared information with the Select Committee as we work to get to the bottom of what happened on January 6th.”

In the letter to Biggs, the panel asks for information about meetings that took place in-person at the White House ahead of the Jan. 6 attacks, as well as remotely, including one on Dec. 21, 2020.

The Select Committee has heard testimony from other witnesses that “suggests that the discussion that day” included plans for Vice President Mike Pence to “unilaterally refuse to count certain states’ certified electoral votes” on Jan. 6 when Congress met to certify the presidential election results.

The panel wants to know if Biggs and two other unidentified members of Congress originally came up with the idea of bringing protesters into Washington, D.C., on Jan. 6.

The letter says that Ali Alexander, an “early and aggressive proponent of the Stop the Steal movement who called for violence before January 6th,” has publicly said that Biggs and two other lawmakers crafted the idea.

The panel also wants additional information about conversations Biggs had with state lawmakers and officials about claims the election was “stolen” and efforts to overturn the election results.

The Select Committee is also interested in conversations Biggs and other House Republicans had about receiving pardons for their actions related to attempting to overturn the 2020 presidential election.

“​​We would like to understand all the details of the request for a pardon, more specific reasons why a pardon was sought, and the scope of the proposed pardon,” the letter to Biggs says.

A trio of lawsuits in Arizona that sought to disqualify Republican Reps. Biggs and Paul Gosar and state Rep. Mark Finchem from the ballot for their alleged roles in the Jan. 6 attack on the Capitol was dismissed in April.

The letter to Brooks is somewhat shorter, asking him to meet with the panel to detail comments he made this March that appear “to provide additional evidence of President Trump’s intent to restore himself to power through unlawful means.”

Brooks said during an interview and a statement that Trump asked him to “rescind” the election of 2020. In the statement, he goes on to write that; “As a lawyer, I’ve repeatedly advised President Trump that January 6 was the final election contest verdict and neither the U.S. Constitution nor the U.S. Code permit what President Trump asks. Period.”

The Select Committee wants to interview Jackson about why “Oath Keepers, including its leader, Stewart Rhodes, exchanged encrypted messages asking members of the organization to provide you personally with security assistance, suggesting that you have ‘critical data to protect.’”

“As you likely know from public disclosures, individuals in these groups have been charged with seditious conspiracy,” Thompson and Cheney wrote. “Several of these individuals are alleged to have plotted the violent overthrow of the United States and allegedly staged weapons at a location near Washington D.C. for that purpose.”

The panel would like to know why members of the organization were interested in Jackson’s location, why they thought he had “critical data” that needed protection, why they wanted to keep Jackson safe and whom he spoke with on his cell phone that day.

The Select Committee said it also wants to record Jackson’s “firsthand observations” of the attack on the U.S. House chamber, during which Jackson was one of the people who barricaded a door to try to stop rioters from getting in.

The letter said panel members would like Jackson to include “the reactions and statements of other members of Congress to the violence at that moment.”

The panel suggested each of the three Republicans meet with the committee the week of May 9, but said other days were an option if the members’ schedules were too packed that week.

The Jan. 6 Select Committee plans to begin holding public hearings on its findings into the insurrection next month.