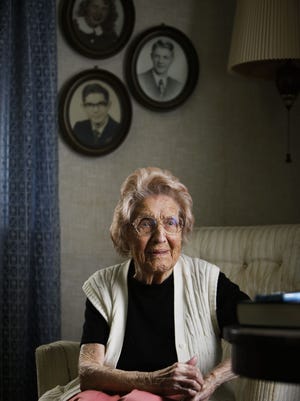 DEWITT TOWNSHIP – Super-Centenary Irene Dunham is a living witness to more than a century of history.

In December, Dunham from Lansing celebrated her 113th birthday.

Last week she became Michigan’s oldest living resident, the sixth oldest living in the United States, and the 22nd oldest living person in the world. This comes from records from the Gerontology Research Group, a group of researchers who review and track supercenturies.

It’s not their only notable distinction.

Dunham has seen the Great Depression, both the world wars and now two pandemics. She is also the oldest surviving student at Bath Consolidated School before she was bombed in the deadliest act of school violence in America in 1927.

Dunham lived in the house in Lansing until last summer, where she raised her family and lived for more than eight decades.

As the oldest of eight children, she now lives in the Senior Assisted Living of Gunnisonville Meadows in DeWitt Township, where she walks with the help of a hiker, reads the newspaper every day and looks out onto a small garden from a window in her room.

Survive over a century of history

Dunham takes the place of the state’s oldest living resident after the death of Battle Creek’s Ellen Goodwill, who died March 2 at the age of 114.

Dunham has been on the Gerontology Research Group’s list of Validated Supercentenarians for several years.

On Tuesday morning, from her room in Gunnisonville Meadows, Irene Dunham said she was looking forward to warmer weather and was sitting outside this spring.

“It’s getting a little warmer so I’m going out pretty soon,” she said on the phone. “I look forward to it.”

During a recent telephone conversation with her, Bruce Dunham told his mother that he planned to visit the next day “if the good Lord wills and the brook doesn’t rise”.

She is also a survivor. Irene Dunham, then Irene Babcock, grew up with her parents and eight younger siblings on a 141 acre family farm about four miles from Bath. Her father grew rye and corn.

She fell ill during the 1918 influenza pandemic, but recovered.

Then, in 1927, at the age of 19, a sore throat kept Irene Dunham away from classes at Bath Consolidated School on the day Andrew Kehoe bombed her.

The 1,000 pounds of dynamite that Kehoe planted in the building’s basement on May 18, 1927, killed 38 classmates and six adults. Dozens of others were injured, including Irene Dunham’s brother.

The graduation ceremony for the 1927 class did not take place that year. Irene Dunham received her diploma 50 years later when the graduating class of Bath High School in 1977 invited the 1927 senior class to their ceremony.

Later in life, when Irene Dunham developed colon cancer, doctors believed it would kill her, but it didn’t.

The menu at this Williamston bakery includes cookies, cakes, and giving back

“It was a long life”

Hard work and staying active always kept her going, he said, and she expected the same from her children.

“When I was a kid I had to stay away from home because if I was home she would take me to work,” he said.