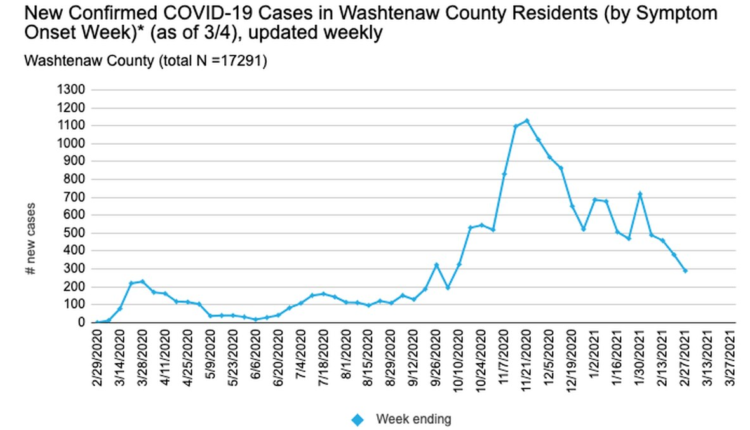 WASHTENAW COUNTY, MI – New cases of COVID-19 are lowest in Washtenaw County since last fall, but officials say it’s too early to say if this was due to vaccination efforts.

As of March 8, the health department reports 19 new cases and one hospital stay in the past 24 hours. From February 18 to March 4, the county reported 633 COVID-19 cases. Of these cases, 3% were hospitalized and two people died.

At the height of the second surge in the pandemic last fall, 2,221 cases were reported, including eight deaths, in the Department of Health’s two-week snapshot from Nov. 11-24. Before this downturn, the number of new cases had been above the average of 1,000 new cases every two weeks for a period of two weeks since August.

While 24,287 first and second doses of the COVID-19 vaccine have been given to county residents and employees, it’s too early to determine if vaccines are causing the decline in cases, health officials said.

“It’s hard to tell if it’s really the vaccines. We don’t usually think vaccines will have much of an impact on prevalence until we reach a much larger percentage of the vaccinated population, ”said Susan Ringler-Cerniglia, spokeswoman for the Washtenaw County Department of Health.

According to Ringler-Cerniglia, research is needed to precisely determine the extent of the vaccine’s impact on a virus’s ability to spread.

“We know for sure that this vaccine will reduce individual susceptibility, the likelihood of spreading it and the likelihood of developing serious illness, but until we get any further, it is difficult to say what impact it will have,” she said.

“A few weeks ago we saw a very high proportion of college student cases in our local universities that has fallen dramatically,” said Ringler-Cerniglia.

“Now the cases are otherwise more geographically distributed than spread across the entire district. Although zip code 48104, where most of our students are located, has decreased, we’ve seen cases in some other zip codes actually increase. “

Outside of zip code 48104, which covers the city of Ann Arbor and continues to lead the county with 202 cases in the past two weeks, 48197, which makes up the parish of Ypsilanti, and parts of the city of Ypsilanti have reported the most cases in the last 14 days , of which 78, from March 4th.

People aged 18 to 22 form the most significant group of confirmed cases in the last two weeks with 37%, followed by people aged 30 to 64 with 36% and residents over 65 with 6% of the reported cases.

As of March 8, there were 17,432 confirmed COVID-19 cases in Washtenaw County, including 1,707 probable cases and 245 probable and confirmed deaths.

Downtown Ann Arbor streets will be closed to improve supplies