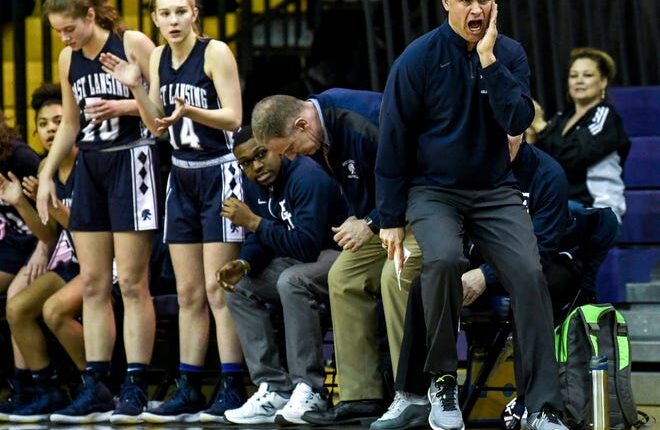 Greater Lansing has had several girls basketball programs succeed at a high level over the past five seasons.

A trio of programs — Fowler, Pewamo-Westphalia and Portland — have claimed state championships in that stretch while several others have produced top talent and made deep runs in the postseason.

As another season gets going this week, here’s a look at the area’s most successful programs since the start of the 2017-18 season, ranked by winning percentage.

Under Rob Smith’s direction, the Trojans have been a dominant force in Greater Lansing and a fixture atop the CAAC Blue standings. East Lansing has finished with at least 20 victories three times over the past five seasons, which included a 26-1 mark and a state runner-up finish in Division 1 in 2018. The Trojans have had a Miss Basketball winner (Jaida Hampton in 2018 ) and a Miss Basketball runner-up (Aaliyah Nye in 2020) in that span. They’ve won at least 16 games in each of those seasons and, in total, have won 14 more games than the next best team in the area.

The Pirates have finished with at least 20 wins three times over the past five seasons and were the Division 3 state champions in 2018 and the state runners-up in 2017. Hannah Spitzley, a 2020, graduate, was a two-time Associated Press Player of the Year in Division 3 and among the key components as PW had 20-plus win seasons in 2017-18, 2018-19 and the COVID-19-halted 2019-20 campaign. The Pirates’ 90 victories in the past five seasons is the second-best total in the area.

Veteran coach Bill McCullen has had one of the most consistent programs in the area and the Panthers have been a regular league title contender. DeWitt has had two seasons with at least 20 victories, which included a 2018-19 season in which it went 23-3 and reached the Division 1 quarterfinals.

Veteran coach Al Screws has rolled up plenty of wins during his career on the sidelines leading the Shamrocks. Over the past five seasons, Portland St. Patrick hasn’t had a losing season. The Shamrocks had a perfect regular season last winter while winning the CMAC title and claimed district championships in 2018 and 2019. St. Patrick is one of seven programs in the area with at least 80 wins over the past five seasons.

The Hornets have had at least 17 wins four times in the past five seasons under the direction of veteran coach Pete Cool. Williamson claimed league titles in 2018, 2019, 2020 and 2022 and captured a district championship in 2022. Three of the standouts from the Hornets’ strong run went on to play Division I basketball in Kenzie Lewis (Bowling Green), Allison Peplowski (South Dakota ) and Maddie Watters (Western Michigan).

The next five best

▶ PORTLAND (84-29, 74.3 winning percentage): The Raiders have won at least 20 games the past three seasons and were the Division 2 state champions in 2021. Portland has won at least 15 games in each of the past four seasons.

▶ FOWLER (87-31, 73.7 winning percentage): With sisters Emma and Mia Riley playing large roles, the Eagles have been a fixture in the final stages of the Division 4 state tournament. Fowler captured state championships in Division 4 the past two seasons and had the AP Division 4 Player of the Year in Mia Riley. Fowler’s 87 wins are the third most in the area.

▶ HASLETT (79-31, 71.8 winning percentage): The Vikings have won at least 14 games each of the past five seasons and have been a fixture at the top of the CAAC Red.

▶ LESLIE (75-31, 70.7 winning percentage): The Blackhawks have had a few of their best seasons in school history of late and had winning records the past four. Leslie has twice finished with 20 wins in the past four seasons and has been a GLAC title contender.

▶ MORRICE (61-28, 68.5 winning percentage) The Orioles have had consistent success and finished above .500 each of the past five seasons. Morrice has had at least 12 wins four times in that stretch.