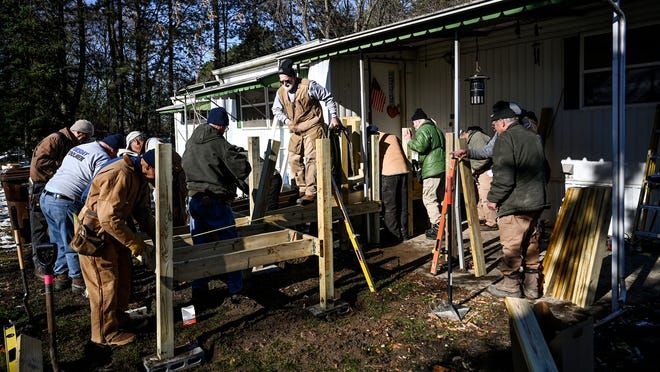 DeWitt Township resident Ann Davis smiled as she watched about 20 men using circular saws to cut wood, dig out her front yard with shovels and construct a ramp for her, transforming the front of her home in a matter of hours.

Davis uses a walker and a scooter for mobility and said she’s been waiting for a ramp since she moved to King Arthur’s Court mobile home park. She was amazed at how quickly the men, part of the volunteer group Tuesday Toolmen, got the work done.

She said the ramp will allow her to get outside and move better on her own, so it means she will have something significant moving forward.

Founded in 2010, the Capital Area Housing Partnership programs volunteers gather each week to build entry ramps and install other safety and accessibility devices for people in need across mid-Michigan.

Every Tuesday, the group of volunteers works rain or shine. When the ground freezes, the group moves to inside projects and this year the group completed its 350th project, Capital Area Housing Partnership Assistant Executive Director Emma Henry said.

The group serves income-qualified people, seniors at least 62 years old, or a person with a disability receiving disability payments or designated by a doctor. Most of the requests come from seniors, but the group has done work for kids with severe medical conditions, Henry said.

The group consists of about 30 volunteers, one woman and the rest of the men, and is open to anyone, she said.

One of the volunteers working on Davis’ home Nov. 22 was Jerry Taylor, 81, who’s been with the group since its start 12 years ago with just eight members. He said he and some of the other original members were part of a mission trip team and wanted to help more people.

He said he and his friends didn’t volunteer much until after they retired. It gives them something to do.

“I don’t want to be a couch potato, I guess,” he laughed.

There is a waiting list of Tuesday Toolmen projects, which are done in order of need, and Henry encourages people to apply so they can get evaluated. She said in one day, the Tuesday Toolmen can change someone’s life.

When the Tuesday Toolmen show up at someone’s home in the morning, the resident might be confined to their space, unable to enter or exit their home freely.

By the end of the day, that person has a smile and maybe some tears, because they can live their life the way they want, with dignity and fewer struggles, after the volunteer group’s help, Henry said.

“That’s really cool to be a part of,” she said.

People can find a link to donate to Capital Area Housing Partnership and a printable version of the Tuesday Toolmen application on the nonprofit’s website.