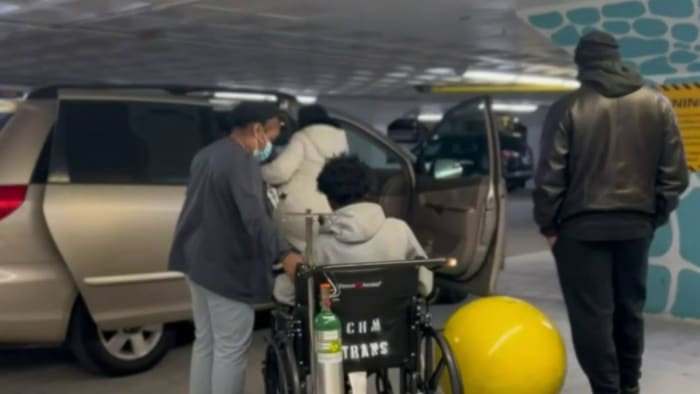 DETROIT – A family is giving thanks after doctors inside Children’s Hospital released the 15-year-old who was shot after Detroit’s tree lighting ceremony on Monday.

The shooters are still out there, but family members say the young man is lucky to be alive.

“It’s a blessing that he’s still here with us today because the shoe could have been very well turned on the other foot,” said the victim’s uncle and community activist, Oliver Gantt.

Gantt was happy to be walking out of the hospital with his 15-year-old nephew, one of the teens shot during Detroit’s busy tree lighting ceremony.

“He got shot in the neck, so he still has fragments in between his fourth and fifth vertebrae and his back,” Gantt said.

One bullet was only three and a half centimeters from hitting a main artery.

Police said the incident started with an altercation, leading to the shots being fired. Family members want it to be known the teenage victims were just that, victims of gang violence.

“They were a gang,” said the teenagers’ father. “But not my son and his little friends. They were really good school kids; They go to school. They play basketball. They do what teens are supposed to do.”

“There were a group of men that had been seen walking around downtown, and one of them had ended up crossing one of his friends, and when my nephew and them turned around to see what was up with a friend, that’s when the shots rang out,” Gantt said.

The father of the teenager, who didn’t want to go on camera, questions why police couldn’t prevent the shooting; He also wants to know why the accused shooters have yet to be caught.

“I’m wondering where were all the cops at,” the father said. “And I know it was busy down there that day. But, these guys were all over the internet saying that they were going to do this.”

“Just to put faces up and say we have people of interest, that’s not enough when it happened in Downtown Detroit of all places,” the father said.

“Whatever Crime Stoppers is putting up, Thousands Strong, we’re going to match it,” Gantt said. “They just hoping for some justice that these guys are caught and taken off the street and things of that nature.”

The other teen shot that was shot in the leg is expected to be ok.

The Detroit Police Department said this is an open investigation that they’re taking seriously. Those who may have seen anything can leave a tip with Crime Stoppers at 1800-Speak-UP.