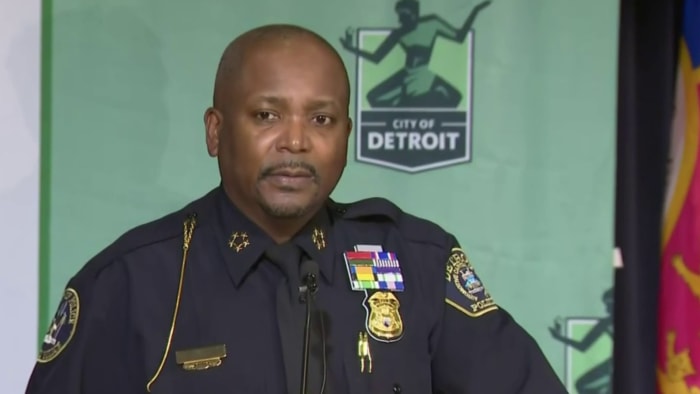 There have been a string of deadly shootings in Detroit since Thanksgiving, including the gas station worker, James Massey Kelly, that was charged with murder after allegedly killing a customer on the holiday.

“What we need is better decision-making,” said White. “Nothing good can come when people are using guns to resolve relatively simple disputes.”

Meanwhile, detectives are looking for a man (seen in the photo below) that they say allegedly shot and killed a victim following an argument over an elevator.

“The one at the party on 400 Monroe Street was just absolutely ridiculous,” White said. “Someone wouldn’t hold an elevator door and was shot.”

“None of the kids we have interviewed thus far attended Detroit Public Schools, and they were from suburban schools, so we’re looking to see if there was some type of conflict,” White said.

The teens were shot by someone standing across the road from an event held at Xquisite Events in Detroit.

“We won’t hesitate to shut these businesses down,” White said. “They come to our city and make money and leave, and then put our community at risk. We won’t tolerate that. We will go in and shut those businesses down.”

Another investigation is taking place on the 9200 block of Burt Road on Saturday, where an 18-year-old was found dead inside of a home. Police say that incident was sparked by a dog that was attempted to be stolen.

There was some sort of argument that led to the death of the 18-year-old, and at the moment. There is no information on the case, but police are asking for help from the public.

Anyone with information should contact the Detroit police or Crime Stoppers at 1-800-Speak Up.

All tips to Crime Stoppers are anonymous. Click here to submit a tip online.