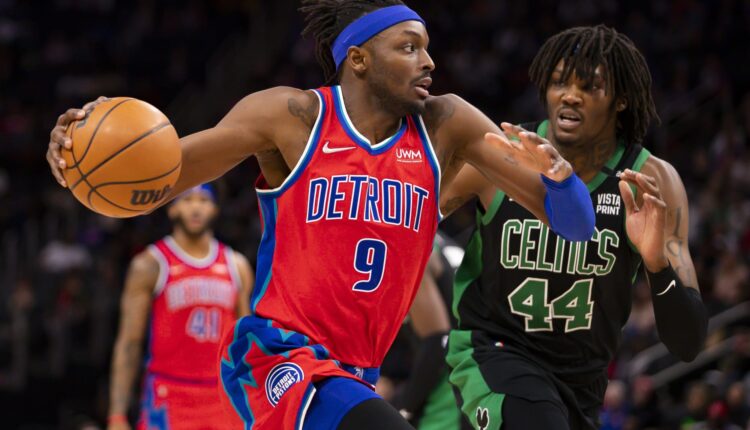 Has Jerami Grant adapted since returning to the Detroit Pistons?

This is not the season Jerami Grant wanted to have for the Detroit Pistons.

The versatile forward predicted the Pistons would make the playoffs in the offseason, but a slow start and a thumb injury to Grant that kept him out for 24 games pretty much ended any hope of that.

Since his injury, most of the focus has shifted to Grant’s role and future with the team, as many thought he would be traded before the deadline.

He wasn’t, so now the Pistons have the offseason to decide if they want to re-sign Grant and make him part of the long-term plans, or trade him and try to add assets for a guy on an expiring deal.

I do think Grant will still have value this offseason, so these last 22 games might ultimately decide if he is in Detroit next season or not.

These are some of the most important games of his career from a contract perspective, so how has Grant adapted since his return?

How has Jerami Grant’s game changed since his return to the Detroit Pistons?

I wrote that Jerami Grant would need to adjust his game when he returned to the Pistons, as the ball was moving better without him, the team was scoring more points and Cade Cunningham had seized the Alpha-Dog role.

The Detroit Pistons are building around Cunningham, not Grant, so it is he who needs to take a secondary role in the offense, not play so much isolation, quit taking shots that don’t come out of the flow of the offense, and in general, be more of a role player than he was last season.

So far the results are mixed. Jerami Grant is averaging 18.7 points, 4.1 rebounds and 2.4 assists for the season on 15.1 field goal attempts per game, 5.3 of which are from long range.

In the 11 games since his return, Grant is averaging 15.6 points, 2.6 rebounds and two assists while taking 13.2 field goal attempts per game with 5.1 of them coming from beyond the arc.

The sample size is small, but Grant has taken two fewer field goal attempts per game since returning. The interesting part is that his 3-point rate has stayed the same, so he is shooing a higher percentage of his shots from long range.

It’s too early to tell if this reduced role is real or just a product of him trying to work back into shape and find a rhythm after missing so much time.

But if Jerami Grant wants to have a future with the Detroit Pistons, this is the type of adjustment he needs to make, taking fewer mid-range shots, more 3-pointers and evolving into more of a 3-and-D guy instead of the primary option.

Tim Horton’s Has Left This Lansing Spot, What Should Replace It?