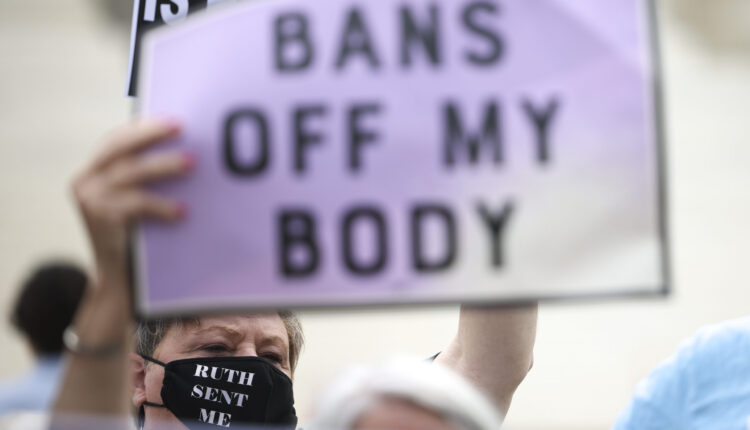 For the first decades after Roe v. Wade was decided, anti-abortion forces made the case that they were the real pro-women movement.

They claimed to love the sinner (the fallen woman) but hated the sin of abortion. They just wanted to save female babies. And some promised to be there with the first box of diapers (the roughly 250 subsequent boxes were always going to be your responsibility).

It was a myth perpetuated in gullible reporting that often swept the movement’s long record of intimidation, violence, arson and murder under the rug. (“Every movement has its extremists,” pundits would tsk, while conveniently ignoring that abortion rights advocates didn’t resort to terrorist tactics to get their point across).

And so, anti-abortion activists had a lot of people fooled when they promised that if the Supreme Court ever overturned abortion, they would never hunt women down and prosecute them for terminating a pregnancy.

But the movement became more emboldened over the years as a powerful force in the Republican Party, proposing a slew of creatively cruel restrictions, like forcing Michigan women to purchase “rape insurance” since standard health policies couldn’t cover abortion, even in the case of sexual assault.

After religious right darling Sarah Palin landed on the 2008 GOP ticket, more Republicans started dispensing with the fiction that they supported exceptions for health, rape, incest and the mother’s life. And we began hearing more and more that throwing doctors in jail was a just outcome (Michigan’s poorly written, 91-year-old abortion ban allows this).

Why don’t pro-lifers care about the trauma inflicted on a child who was already sexually violated and then forced to give birth? How do we think she will ever have a normal, happy, healthy life? Why should her life be sacrificed?

Then Donald Trump came on the scene. There’s no evidence that he was ever pro-life, but he gleefully jumped on the bandwagon while running for president in 2016 to prove he really was a Republican. Only Trump was never a quick study — he reportedly didn’t read intelligence briefings in office, but would look at pretty graphs — so he would say the quiet part out loud, like that “there has to be some form of punishment” for women who have abortions.

Naturally, Republicans and their anti-abortion benefactors quickly denied that would happen and Trump’s favorite daughter, Ivanka, was dispatched to reassure suburban women and insider journalists that her dad didn’t mean any of that.

But that, of course, has become the official policy of today’s GOP now that the far-right court couldn’t wait to overturn Roe to signal that the era of universal human rights (however imperfect in practice) is over.

One of the first victims of this misogynistic fiat was a 10-year-old rape victim in Ohio who was forced to travel to Indiana to terminate her pregnancy.

It’s clear that a lot of Republicans skipped health class, but pregnancy and childbirth can be dangerous even for healthy, adult women (far more so than abortion).

My first pregnancy was considered normal. I never had severe complications, but I was still hospitalized twice for severe dehydration because I had violent morning sickness up until the day I gave birth — and that’s pretty minor compared to diabetes, high blood pressure or being on bed rest for months. I also had a Cesarean section, which is major surgery (my then-husband watched doctors juggle my organs while trying to get our child out). Oh, and I was expected to be back to work six weeks after that and had to negotiate for more time off (none of which was paid).

Even under the best of circumstances, we face a world that’s hostile to the well-being of mothers and children, despite the flowery pro-life rhetoric.

I can’t believe I have to explain this, but a fifth-grader does not have a body suited to carrying or delivering a baby. (The World Health Organization found that the leading killer of girls 15 to 19 — who are years older — is pregnancy and childbirth complications). Expecting young girls to fully understand what’s happening is sadistic. Journalist Jill Filopovic recalls interviewing a 12-year-old rape victim who responded to being told she was going to have a baby by hearbreakingly asking if she could have a doll instead.

Protesters, demonstrators and activists gather in front of the U.S. Supreme Court as the justices hear arguments in Dobbs v. Jackson Women’s Health, a case about a Mississippi law that bans most abortions after 15 weeks, on December 01, 2021 in Washington, DC. With the addition of conservative justices to the court by former President Donald Trump, experts believe this could be the most important abortion case in decades and could undermine or overturn Roe v. Wade. | Chip Somodevilla/Getty Images

Why don’t pro-lifers care about the trauma inflicted on a child who was already sexually violated and then forced to give birth? How do we think she will ever have a normal, happy, healthy life? Why should her life be sacrificed?

But GOP Ohio Senate nominee J.D. Vance flippantly dismissed such circumstances as “inconvenient,” adding, “The question to me is really about the baby.”

Michigan GOP gubernatorial hopeful Garrett Soldano is on the same page, announcing that rape victims who become pregnant must “protect that DNA and allow it to happen.”

You also have Republicans trying to pass laws charging doctors with “abortion murder” if they don’t “reimplant an ectopic pregnancy” in the uterus — which is medically impossible — so it’s abundantly clear that anti-abortion activists don’t care about facts or pregnant people’s health.

So now that Roe is dead and reality has set in, have Republicans become more compassionate? In a word, no. They’re even more emboldened, cooking up laws barring people from crossing state lines for abortions, putting bounties on their heads and making every miscarriage a potential crime.

Take Kristi Noem, a red-state governor and likely 2024 contender, who was asked about the case of the 10-year-old. After giving the perfunctory answer that this was “horrific” she declared, “But, in South Dakota, the law today is that the abortions are illegal, except to save the life of the mother.”

Pro-lifers have proved that they’re not just into punishing women — they also delight in punishing child victims of horrific crimes.

Far-right justices and overzealous GOP leaders have fundamentally changed the issue. Abortion is no longer a personal decision for you and your family. You now have the state deciding what you can and cannot do with your body — and Republicans are willing to imprison women, ban them from freely traveling, force children to endure risky childbirth and more.

A lot of my colleagues seem surprised at the swift and vehement backlash to the Supreme Court’s massive overreach. “But people are divided on abortion,” they protest as they keep writing stories about polls on people’s personal beliefs.

What they’re missing is that these far-right justices and overzealous GOP leaders have fundamentally changed the issue. Abortion is no longer a personal decision for you and your family. You now have the state deciding what you can and cannot do with your body — and Republicans are willing to imprison women, ban them from freely traveling, force children to endure risky childbirth and more.

We’re a country that doesn’t like people telling us what to do. Now we have more than half the population that can’t make basic decisions because the state has the ultimate power. And you have a political party dedicated to making the process as cruel and dangerous as possible.

That’s a whole new ballgame. And that’s why the SCOTUS decision is deeply unpopular with the vast majority of the country. Far-right justices think they can issue edicts swiftly snatching away other basic rights of privacy, contraception, same-sex marriage and non-discrimination and the majority will simply acquiesce.

Our nation turned 246 years old yesterday. Nobody signed up to live in a land where freedom and democracy are concepts in name only. We’re citizens, not subjects. And you can count on the fact that the majority will not consent to be ruled by an authoritarian, out-of-control court.

Crowdsourced Data on Overdoses Pinpoints Where to Help