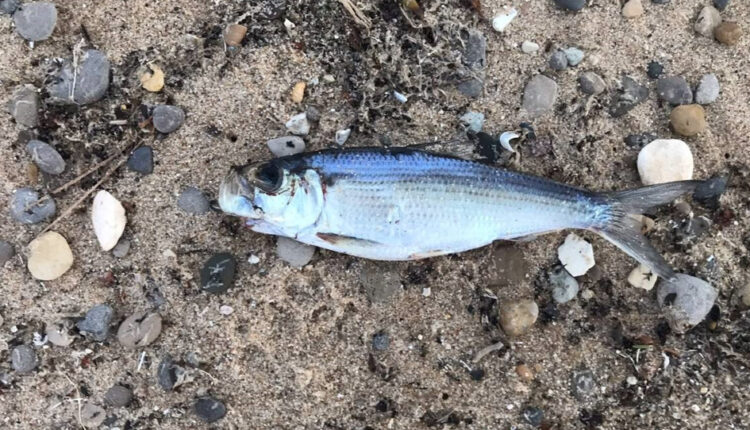 GRAND RAPIDS, Mich. (WOOD) — The Michigan Department of Natural Resources says Lake Michigan is experiencing a large seasonal die-off of the alewife — something that was common in parts of the 20th century but is relatively rare now.

“The die-off is larger than normal this year and something we have not seen in years,” Jay Wesley, the Lake Michigan Basin Coordinator for the Michigan DNR, said in a release. “We are seeing the die-off extend from Muskegon all the way up to Cross Village and out to the Beaver Island complex.”

The good news is DNR officials say there’s no evidence that the die-off is being exacerbated by pollution or disease; all evidence points to a naturally occurring event.

Heather Hettinger, a fisheries management biologist with the DNR, told the Traverse City Record-Eagle that the die-off has to do with the changing weather and alewife’s strong focus on spawning.

“As the snow and ice thaw and spring settles in northern Michigan, there are usually quick shifts in temperature. Also in the spring, alewife come to the lake shorelines to spawn,” Hettinger told the Record-Eagle. “Between the weather changes affecting the temperature of the water and the alewife’s hyper-focus on spawning, the fish get caught in waters where they cannot properly regulate their body temperatures, causing them to die-off in large numbers.”

Alewife are small prey fish that can reach up to 9 inches in length. They are not native to the Great Lakes. Scientists believe alewife migrated from the Atlantic Ocean into the Great Lakes through the Welland Canal sometime in the 1920s and 1930s.

By the 1950s and with no key predators to keep the population in check, alewife dominated Lake Michigan, Lake Huron and Lake Ontario. According to Hettinger, coastal towns would use heavy-duty equipment to remove the mounds of dead fish from the beaches.

The DNR started stocking more salmon in Lake Michigan, which helped bring the population numbers down and limited the impact of the die-offs.

“Alewife have become a pretty important forage species over the years, especially for fish like chinook salmon, coho salmon, steelhead, brown trout,” Hettinger told the Record-Eagle. “There’s a lot of fish that use them as a component of their diet.”

DNR officials say if you spot a fish kill and suspect it is from non-natural causes, to call the nearest DNR office or Michigan’s Pollution Emergency Alert System at 800.292.4706.

Senate Deal Raises Hopes for a Reduction in Gun Suicides

There is no opt-out in Detroit Tigers’ manager A.J. Hinch’s contract