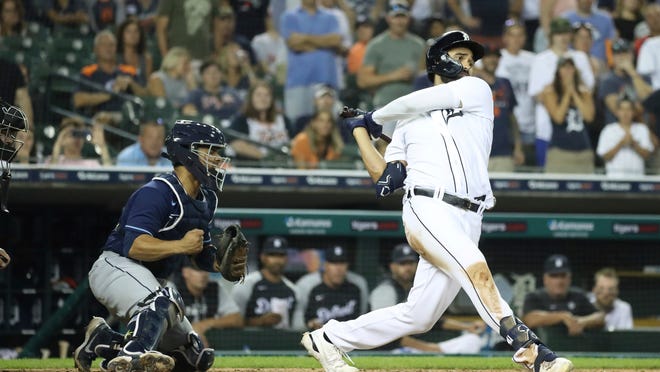 For the first time since Tommy Bridges in 1932, a Detroit Tigers pitcher completed four innings or fewer and conceded six walks or more without allowing a run.

That isn’t a club Bryan Garcia wanted to join, but he became the fourth member of the club for the franchise on Friday in the second of four games against the Tampa Bay Rays at Comerica Park. Still, the ex-closer turned into another decent outing in his second MLB career start.

“You’re happy to get away with it, but you’re not going to be very successful in the long run if you keep doing that,” Garcia said. “I got to dial it back in, get back on the mound and really focus on my next bullpen before the next start.”

As Garcia escaped jams, his offense perked up for three runs across the first and second innings. But the Tigers couldn’t avoid the consequences of the pitching staff’s season-high 13 walks in a 5-3 loss in front of 21,547 fans.

“That’s incredible,” manager AJ Hinch said. “I don’t really know how to describe it because it’s unusual in the game, certainly unusual for our staff. We had a hard time from the get-go. … Eventually, the game won’t let you make that many mistakes, especially with the fastball. That was a bad night on the mound.”

Rookie center fielder Riley Greene led the early offense for the Tigers (42-66) with a two-run home run — the third homer of his MLB career — to take a 3-0 lead in the second inning. He connected on a second-pitch two-seam fastball from Ray’s right-hander Corey Kluber and sent the ball over the wall in left-center field.

It was Greene’s first opposite-field homer.

Kluber allowed three runs on seven hits, without allowing a walk, over his innings, throwing 65 of 84 pitches for strikes. He struck out five batters and produced 12 swings and misses, including five with his curveball.

“He might have been throwing too many strikes,” Hinch said. “He was around the zone so much, and we were able to put some balls in play. … After (Greene’s homer), there was a hit or two, but until we gave ourselves a chance in the ninth inning, it was pretty quiet.”

The Tigers scored their first run in the first, opening with Greene’s leadoff single. A one-out single from Javier Báez upped the pressure on Kluber, and with two outs, Jeimer Candelario delivered a two-strike RBI single for a 1-0 advantage.

After Victor Reyes’ second-inning double, the Tigers had onfour batters reach safely throughout the remainder of the game.

After Garcia, the Tigers’ bullpen needed to get through the final five innings.

To do so, Hinch called on six relievers. In the process, though, the Rays scored five runs — including three in the eighth inning — to steal their second win in the series. Right-hander Joe Jiménez, who got the final out in the seventh, allowed three runs in the eighth without recording an out.

“It’s a lineup over there that doesn’t chase,” catcher Tucker Barnhart said. “If you’re not in the zone, they make you work. That’s where it starts. After that, I don’t really have an answer for you. It was a recipe for a rough one for us, not throwing many strikes to a lineup that doesn’t chase pitches outside of the zone.”

Brandon Lowe then scored them both for a 4-3 lead on a double to right field, and he advanced to third base on the unsuccessful throw home. Ex-Tiger Isaac Paredes, traded to the Rays in April for outfielder Austin Meadows, upped Tampa Bay’s lead to 5-3 with an ensuing RBI single to right field.

“What’s hard to imagine is the fastball missing,” Hinch said. “We were missing with fastballs. Usually with spin, you can get a little bit sideways with your command and control. … We were spraying fastballs tonight left and right, and that’s uncommon.”

The Rays scored their first two runs in the fifth and sixth innings, with those runs charged to right-handers Will Vest and Jason Foley.

Facing Vest in the fifth, David Peralta drilled a two-out double for the first run. Left-hander Andrew Chafin replaced Foley with two runners on in the sixth, and on Chafin’s first pitch, Lowe put a fastball into center field for an RBI single and the second run.

“He’s a real difference maker,” Hinch said of Lowe. “His power is good. He hits lefties, hits righties. It doesn’t seem like he misses barrels. He’s got a pretty good approach and just a simple swing, and it’s powerful. He knows what he does best.”

Left-handed closer Gregory Soto, in a non-save situation, pitched a scoreless ninth. He did not issue a walk.

Here’s how the 13 walks were distributed: Garcia (six), Vest (three), Jiménez (three) and right-hander Jose Cisnero (one). Detroit’s franchise record for walks in a nine-inning game is 15, which has happened twice.

“To have a chance to win the game in the ninth inning after walking 13 guys,” Barnhart said, “I would consider that a minor miracle.”

Through two innings, Garcia had faced 10 batters and walked five of them.

“I clearly didn’t have it today,” Garcia said.

He walked two batters in the first and three more in the second. His defense executed a double play after Lowe’s leadoff walk in the first. A one-out single in the second from Randy Arozarena was erased when Barnhart, the catcher, threw down to Báez to catch him trying to steal second base.

“At the end of that inning, that at-bat to Lowe, I finally tried something else. I wasn’t gripping the fastball as hard and was trying to see it through Tuck’s mask. That helped, and that’s what I went with the next two innings.”

The 27-year-old retired six of the final seven batters he faced to complete four innings and end his outing. He walked six, gave up one hit and struck out three batters, throwing 36 of 72 pitches for strikes.

Garcia threw 41 two-seam fastballs, 17 changeups and 14 sliders, with his slider generating three of his four swings and misses. He has a 2.35 ERA over two starts this season, spanning 7⅔ innings.