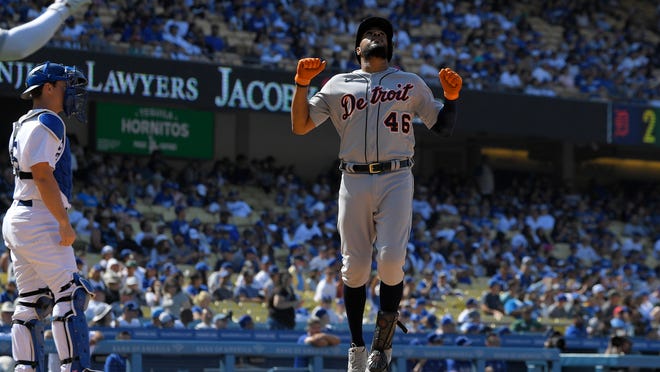 He appears to have avoided a serious injury.

PITCHER’S EXPLAIN: What makes Miguel Cabrera one of the greatest hitters ever? Just ask the pitchers he faced

Grossman, 32, sustained the injury in the batter’s box in the top of the second. Dodgers right-hander Walker Buehler drilled him in the right hand with a fifth-pitch 92.8 mph cutter to load the bases with two outs.

The Tigers allowed Grossman to stay in the game and run the bases, but after Javier Báez’s strikeout stranded the runners, athletic trainer Doug Teter checked on Grossman and walked alongside him as he exited the dugout.

“When he got hit, we went out there and it was his hand,” Hinch said. “By the time he was done on the bases, it was pretty black and blue already. We took him out, got X-rays. They’re negative right now. We’ll get further tests in the morning.”

Grossman, a switch-hitter, finished Sunday’s game with one walk, one hit-by-pitch and one stolen base in his two plate appearances. Through 18 games, he is hitting .288 with two doubles, five RBIs, 11 walks and 22 strikeouts.

NOTEBOOK: Derek Hill has secret weapon vs. shift with Tigers: ‘A big part of my game’

This is Grossman’s second injury this season.

He departed from an April 12 game against the Boston Red Sox with right groin tightness. The 10-year MLB veteran avoided a trip to the injured list but didn’t return to the lineup until April 16.