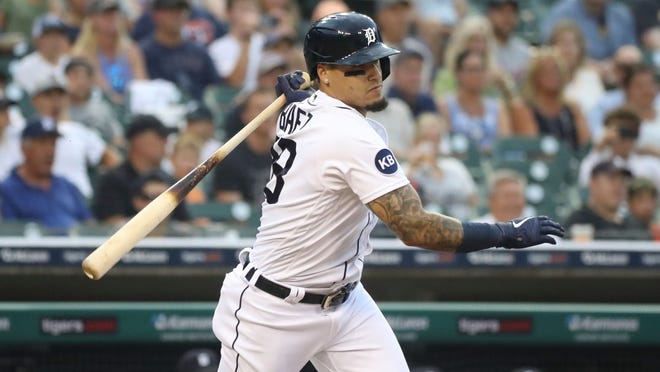 Sloppy play has been the Detroit Tigers’ identity since the All-Star break.

The Tigers capitalized on a pair of errors from Tampa Bay Rays third baseman Yandy Diaz in the bottom of the third inning Thursday, but in the top of the next inning, two miscues from the Tigers’ defense put them back in the hole.

In the series opener against the Rays, the Tigers never led, and due to a lackluster offense, they couldn’t make up for their fourth-inning mistakes in a 6-2 loss at Comerica Park.

“We haven’t swung the bat very well,” manager AJ Hinch. “It’s just not a good night offensively, and it’s been a rough go of it for a majority of the season, so it is difficult when you give a team more outs than they deserve. But you’re not going to win games 1- 0, 2-0, so you can make an error or two, but you still got to swing the bat.”

The Tigers (42-65) have allowed 22 unearned runs in 15 games since the All-Star break, including 17 unearned runs in an eight-game stretch from July 23-30. In Thursday’s loss, Detroit’s league-worst offense, at 3.2 runs per game, registered six hits, zero walks and eight strikeouts.

Eric Haase and Jeimer Candelario had one-out singles in the ninth inning, but the Tigers stranded two runners to end the game.

“We’re going to address every single thing that we do, and we are,” Hinch said. “It’s still a team that’s learning. We have a lot of guys that are trying to find their way, but some of our veteran players have to be reminded when they do something right or wrong. We’re addressing it every day. We’ “Re going to talk about it. We’ll keep showing them the plays that we should be doing better. That’s what we do.”

With two outs in the fourth inning, Christian Bethancourt reached safely on a single to left field. The next batter, Diaz, hit a grounder to shortstop Javier Baez, who should have gotten the third out. But the ball skipped past Báez’s glove for his 16th error in 2022.

Báez, who made his 17th error in the ninth inning, leads the majors in errors this season. He had his second two-error performance in the past four games, with the other occurring Sunday against the Blue Jays in Toronto.

Brandon Lowe singled to score Bethancourt, putting the Rays ahead, 3-2, and Diaz came around to score, as well, on a wild pitch from right-hander Drew Hutchison. The Rays controlled a 4-2 lead that stood until they added runs in the seventh and ninth innings.

“This is a team game,” Hutchison said. “They make great plays for me all the time. That’s part of this game: You got to pick up your teammates. They pick me up all the time, and I didn’t do a good job of doing that. … Those Things happen. They made some great plays behind me tonight.”

Hutchison allowed four runs (two earned runs) on eight hits and three walks with three strikeouts over six innings, throwing 50 of 88 pitches for strikes. All six of his swings and misses came on his slider, which he used 43% of the time.

“He pitched in a lot of traffic for the majority of the game,” Hinch said. “He hasn’t pitched great with runners on base. It’s difficult for anybody, but when he falls behind, he tends to pitch around the margins and falls into some bad counts. He escaped a lot of it, and if we played a little bit better defense, he would have escaped more.”

In the seventh, right-handed reliever Alex Lange struck out the first batter he faced before throwing eight balls in a row. Those eight pitches resulted in walks to Isaac Paredes and Ji-Man Choi. A mound visit from pitching coach Chris Fetter helped Lange find the strike zone again, but Randy Arozarena won an eight-pitch battle with an RBI single.

“He rode that fine line between difficult innings and difficult to hit,” Hinch said. “When he does that, he can escape because of his stuff, but it’s a taxing inning when he throws so many pitches.”

The Rays took a 5-2 lead but stranded two runners in scoring position, as Lange struck out the final two batters to escape further damage. The Tigers used right-hander Will Vest in the eighth inning and righty Wily Peralta in the ninth.

Peralta gave up an RBI double to Arozarena.

The Tigers have lost five of their past six games.

The Rays scored first in the top of the third inning.

Brandon Lowe unloaded on Hutchison’s changeup, after Diaz worked a four-pitch walk, for a two-run home run and a 2-0 lead.

The Tigers clawed back in the bottom of the third, beginning with a leadoff single from Daz Cameron. Diaz, the Rays’ third baseman, then committed back-to-back errors to load the bases with nobody out.

Rookie Riley Greene produced a sacrifice fly to put the Tigers on the scoreboard. Báez tied the score, 2-2, when he shot a full-count changeup the opposite way and into right field for an RBI single.

Báez finished 2-for-4 with one strikeout.

“We swung the bats well,” Cameron said. “The pitcher made some good pitches in the zone to get some hitters out. We came away short there, but we’re in a good spot with where we need to be scoring runs and having good at-bats.”

Ray’s left-hander Jeffrey Springs allowed two runs (both unearned) on four hits with six strikeouts. He didn’t concede a walk and threw 60 of 85 pitches for strikes, generating six of his 11 swings and misses with his changeup.

Harold Castro wasted a leadoff double in the fifth inning. Three pitches later, he ran into an out at third base on a ball hit to short. The Tigers stranded Báez at third base in the sixth. He singled to open the inning and advanced to third on the next two plays but never made it home.

“It bothers me a lot,” Hinch said. “We should be better. It’s physical and mental. These are plays that are not hard. The frustrating part is when you get in a rut like this has been, you try to do too much, you try to extend something, you try to see something that’s not really there, you stop letting the game come to you. It turns into a lot of mental mistakes. We have a lot of work to do.”