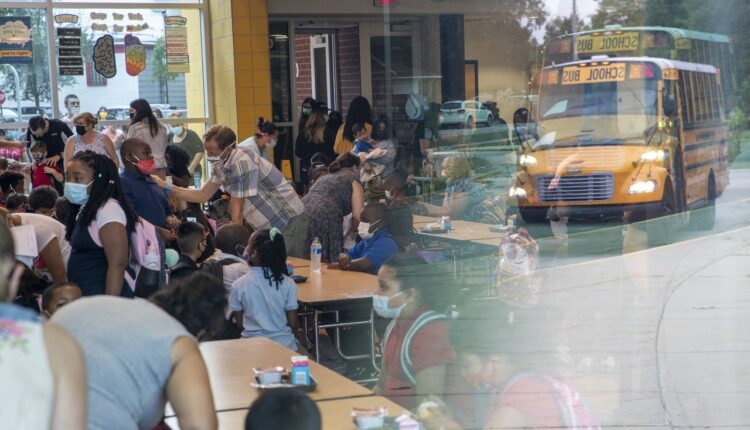 GRAND RAPIDS, MI – Grand Rapids Public Schools has updated its dress code policies ahead of the upcoming school year, after students convinced the district to get rid of its school uniform requirements earlier this summer.

The Grand Rapids Board of Education approved the district’s new dress code this week. The goal of the new policy is to “provide scholars with freedom to express themselves while ensuring safety and educational goals,” according to a GRPS news release.

Students are required to wear comfortable and appropriate clothing for the school setting, which includes footwear and any accessories, according to the new dress code policy listed on page 44 of the 2022-23 GRPS student handbook.

For example, GRPS students are not allowed to show any undergarments, midriff, or cleavage at school, the dress policy states. Head coverings are only allowed for religious or medical purposes, according to the district.

Here is a list of what is prohibited under the district’s new dress code:

A districtwide survey last year found that students at GRPS were largely in favor of ditching the school uniform code, especially in high grade levels. Nearly 70% of students who responded to the survey said they don’t think schools should be allowed to require uniforms.

“I like wearing what I’m comfortable in. Uniforms are not comfortable,” one student wrote in a survey the district used to make its decision. “I just want to be me and not the same as everyone. Who cares what I wear as long as I am at school?”

A group of students called the Superintendent’s Scholars Advisory Council, which comprised 20 high schoolers from across the district, strongly advocated for the district to change its uniform code last year.

Their advocacy is the reason the district decided to reconsider its uniform policies and conduct a survey to gauge input from parents, students and staff, according to a letter from Superintendent Leadriane Roby.

“The scholar voice in empowerment and decision-making around their education was the leading priority of what led to this decision to be made to eliminate school uniforms,” district spokesperson John Helmholdt told MLive/The Grand Rapids Press in June.

The district’s dress code, which was approved in 2012, was intended, in part, to eliminate distractions and teasing over the clothes students wore to school. The move was also seen as a cost savings for parents and a way to increase the focus on teaching and learning.

The district-wide policy was implemented in phases. K-8 students, since the 2013-14 school year, have been required to wear khaki-style pants, shorts or skirts and collared, solid-colored shirts such as blue and red. High schoolers had to make the change the 2015-16 school year.

School leaders say families with questions about the district’s new dress code can contact their school, or the GRPS Communications Department at 616-819-2149 or [email protected]

Sights and Sounds: A Sunny Day at Boardman Lake Trail