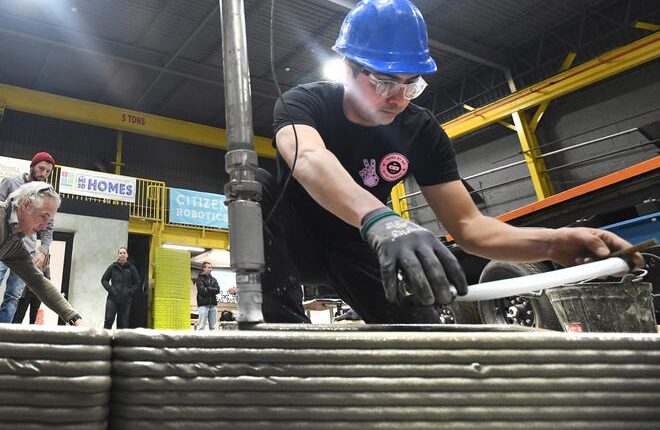 Detroit — With the push of a button, a long-armed robot steadily piped out a concrete mixture, programmed to follow a pattern that will create the exterior wall of a house. Dozens of these segments would eventually be transported from a facility in Detroit and connected to build a 1,000-square-foot, two-bedroom home on the city’s east side.

Detroit-based nonprofit Citizen Robotics, creator of the 3D printed house, and the Michigan State Housing Development Authority, celebrated the start of construction Tuesday afternoon for the house, which they tout will be the first of its kind in the city.

“We need to learn how to design houses that robots can build,” said Tom Woodman, founder and executive director of Citizen Robotics. “And if we don’t do this, if we don’t invest in innovation, if we don’t make it possible to build more homes with fewer workers, then our housing stock will continue to decline and the cost of housing will continue to go up.”

Those gathering for the construction kick-off watched as the robot, a former welding machine, repeated its pattern under the watchful eye of a crew manning the machine and manually smoothing out any rough spots. The robot was expected to continue this work for hours in the Citizen Robotics workshop in southwest Detroit.

The Citizens Robotics shop sits on 20th Street not far from the Michigan Central Station. It serves as the site where portions of the house will be printed and then transferred to a lot at 1444 Sheridan St. in the Islandview neighborhood. The segments will be bonded and topped with structural insulated panels. It will take about two weeks to print the home and about three weeks for it to cure. Woodman said he expects to have a completely enclosed structure in about six weeks. The exterior will feature a green-tinted stucco.

“We purposely designed this to fit in the neighborhood so it doesn’t really stand out,” he said. “I’m guessing people are going to drive by and not even know it’s been 3D printed.”

The home is expected to be ready in the spring when it will be sold to a private owner at 80% of the area median income, Woodman said.

The pilot home is expected to cost about $230 per square foot to build, Woodman said. In this case, that’s about $230,000. Woodman said that over time, he expects costs to come down as the process gets more efficient.

Woodman said he’s also focused on building a home that is more efficient, lowering utility costs for the owner.

“We’re so fixed on our front development costs, upfront build costs that we lose sight of the bigger picture, which is how do we build a better house?” he said. “How do we build a house that costs less? And that’s actually really important to the homeowner. If you’re talking about the housing insecurity question and you can build a house that’s going to cost someone $50 a month, $25 a month to heat and cool, you’re making a big difference for that person. So I really would like to see us focus on how we can build better homes, not just cheaper homes. That we definitely believe we can do with our method.”

The project received nearly $160,000 in funding from the Michigan State Housing Development Authority’s Neighborhood Stabilization Program to cover the construction materials for the house. Tonya Joy, director of neighborhood housing initiatives at MSHDA, said the agency is exploring the technology to make sure it’s a viable housing option for Michigan.

“I think this could have an amazing impact on Michigan,” Joy said. “Just because we have such a housing shortage. We can find a way that we can build affordable homes that are safe and are energy efficient, which it’s supposed to be. The energy costs in Michigan are so high. If we can minimize that and make it affordable, that’s a win for everybody.”

Woodman said it took three years of development to get to this point and that the home on Sheridan is only the beginning. There are plans for a 3D printed home build with Habitat for Humanity in Flint. Russell, the builder, said he plans to build a 1,200-square-foot, 3D-printed home for himself on land he owns in Grosse Pointe.

“No garage, no basement,” Russell said. “Barrier free. An age-in-place kind of thing.”

Woodman said the home on Sheridan will have universal design with large hallways, wide doorways, open floor plan and a handicap-accessible bathroom.

“I don’t think it’s going to be difficult to sell it,” Woodman said. “I mean everyone’s going to want their heating and cooling bills down. And it’s going to look cool.”

Detroit Pistons run out of steam in road loss to New Orleans Pelicans, 104-98