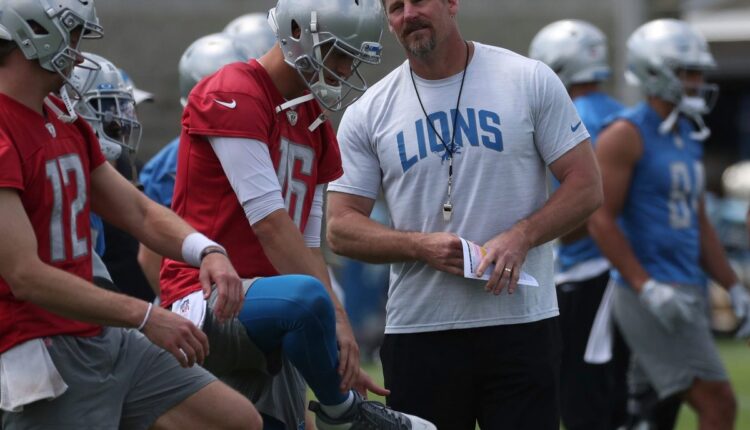 Could Detroit Eventually Pose A Legitimate Threat To the Vikings?

Dan Campbell was emotional after Greg Joseph hit a last-second field goal to beat the Detroit Lions, making them 0-5 to start the season. “When you see your players give all that they have, and you lose that way, it’s tough,” he said. “You don’t want that for them. But we’ll be better for it.”

Campbell made a name for himself by stating he wanted a team full of players who would bite their opponents’ kneecaps off in his introductory press conference. Everyone worried about his cardiovascular health after he disclosed that he guessed roughly 800 milligrams worth of caffeine to start his morning. But the burly Texan won over everyone’s hearts when he broke down after the Minnesota Vikings game.

He genuinely cares about his guys.

Campbell’s declaration that “we’ll be better for it” became a harbinger for later in the season. As Vikings fans remember, Campbell’s mighty knee-biters beat the Purple in Detroit. Cameron Dantzler wandered too far into the end zone, and Jared Goff capped off his game-winning drive by throwing a touchdown pass to Amon-Ra St. Brown.

The Lions picked up their first win that day, then would pummel the Arizona Cardinals two weeks later. They finished the season 3-13-1, but fans and pundits around the league felt Detroit might have finally found their coach in Campbell. Conversely, the Vikings faded into oblivion. They finished the year 8-9 with a meltdown in Green Bay that sealed Mike Zimmer’s fate.

We could portray this as two teams on separate trajectories, but that’s not really the case. The Vikings are trying to reboot, bringing in Kevin O’Connell to get more out of their talented roster. The Lions still need to figure out their quarterback situation. They are probably a good draft or two away from building a winner. Still, like a shark lurking in the deep, it may be easy to overlook this team. They’re capable of chomping off an appendage if you’re not careful.

O’Connell is Minnesota’s bulwark against Campbell’s meniscus munchers. Zimmer was a conservative coach by nature. He had to be feeling pressure from the front office and fans all year. Zimmer had coached the Vikings for eight years, only had two playoff wins to his name, and was coming off a 7-9 season. He often coached not to lose, which ironically nearly cost them the Lions game in Minneapolis. In some ways, it was fitting that Minnesota lost in Detroit with its cornerbacks hovering in the back of the end zone.

But O’Connell has the benefit of being Zimmer’s replacement. Not only will most fans give him the benefit of the doubt early on, but he’s an offensive coach who should be aggressive and innovative. Sean McVay’s teams play to win – except, well, in Super Bowl LIII – and O’Connell comes from the McVay tree. By implementing his illusion of complexity, he should allow Kirk Cousins ​​to operate with a “quiet mind.” Conversely, he’ll probably expect Cousins ​​to be more aggressive while running the offense. He’ll give him no excuse not to be.

It’s not just Cousins ​​and the offense, though. Zimmer was a defensive mastermind, but new defensive coordinator Ed Donatell is switching to a 3-4 and designing his illusion of complexity. Given that the Vikings have invested in Danielle Hunter and Za’Darius Smith, he will expect his defensive front to pressure the quarterback. Minnesota also drafted players with a particular identity: fast, physical, and violent. Lewis Cine, Andrew Booth, and Brian Asamoah aren’t going to be standing around with their hands in their pockets. They’re going to be eager to get into the backfield.

The Vikings sat back and let Goff pick them apart on the final drive in Detroit. It was particularly frustrating because Goff struggles against the blitz, and Zimmer has created pressure using innovative blitz schemes throughout his career. Donatell will likely flummox opposing quarterbacks using his 3-4 defense, bringing relentless pressure to speed up their reads.

Last year, the Vikings created a winning blueprint in Week 2, only to abandon it two weeks later. Minnesota lost 34-33 on a last-second field goal in Arizona, but they were aggressive throughout the game. Klint Kubiak matched Kliff Kingsbury’s air-raid offense using motion to open up holes for Dalvin Cook. Cousins ​​was surgical on the final drive, eliciting praise from his skeptical head coach. Joseph missed the chip shot to win the game; that always happens to the Vikings. But the conclusion should have been to stay aggressive.

A week later, the Vikings routed the Seattle Seahawks, 30-17. The win felt impressive at the time, given Minnesota’s track record against Seattle. However, the Seahawks ended up 7-10 and traded Russell Wilson to the Denver Broncos in the offseason. Still, the Vikings shouldn’t have reverted to conservative play as they did a week later in a 14-7 loss to the Cleveland Browns. Ironically, the Lions game in Week 4 came down to the same play as the Arizona game; only Joseph’s kick sailed through the uprights and gave Minnesota the 19-17 win.

O’Connell and Dontell should be ruthless throughout the season. They’ve inherited a talented roster. They are on the cutting edge of modern NFL schemes. And they likely had witnessed what happened to the Vikings when they played not to lose last year. The Vikings should steamroll the Lions, knowing that they need to pick up division games if they’re going to get the Purple back into the playoffs.

Still, the Lions pose an immediate and long-term threat. If O’Connell doesn’t prepare his team mentally and strategically, Campbell’s Motor City Kitties will nibble at Minnesota’s knees. And if Kwesi Adofo-Mensah doesn’t build off the group he inherited, Jameson Williams will eventually have a revenge game against the Vikings when it hurts worst. Adofo-Mensah traded the Lions the pick they used to take Williams, and every athlete who a Minnesota team spurns eventually enacts vengeance.

There used to be three strictures that the Vikings adhered to every season. They will miss a crucial kick, ex-players will haunt, and the Detroit games are the free spaces on the bingo card. But Campbell’s Cats may eventually become a fearsome predator. “We’ll be better for it,” he declared after the loss at US Bank Stadium last year. The Vikings were once begging but cannot become twice shy under the new regime.