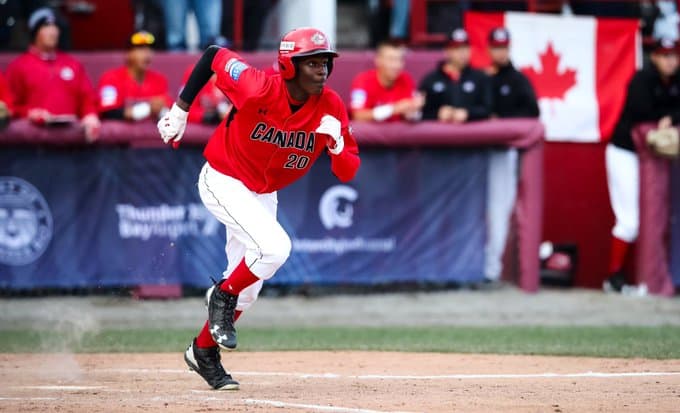 How does this work?

Denzel Clarke is on a roll.

The Ajax outfielder, now in his second year as a pro with the Oakland Athletics organization, hit an inside-the-park home run for the second consecutive game as the Lansing Lugnuts beat the West Michigan Whitecaps 8-1 in a rain-shortened matinee wednesday

With Lansing up 2-1 Clarke seized the spotlight in the sixth with a liner into the left field corner that gave West Michigan outfielder Austin Murr trouble. By the time Murr corralled the ball Clarke was getting the wave home and scored standing up without a throw.

Clarke is the first Lansing player in seven years to hit two inside-the-park home runs in a single year.

Clarke, a 6’5” former Oshawa Legionaire, is fresh off an appearance for the AL in the MLB Futures Game in which he made a spectacular catch in center, face planting into the fence to rob the NL’s Joey Wiemer of extra bases.

Clarke, a former member of Canada’s junior national team, spent three seasons with Cal-St. Northridge, earning a Tri-Defensive Player of the Year in 2021, before being drafted by Oakland.

DENZEL CLARKE, INSIDE THE PARK pic.twitter.com/d4OzeBUBwu

Subscribe now to receive our daily email of today’s top stories in your city!