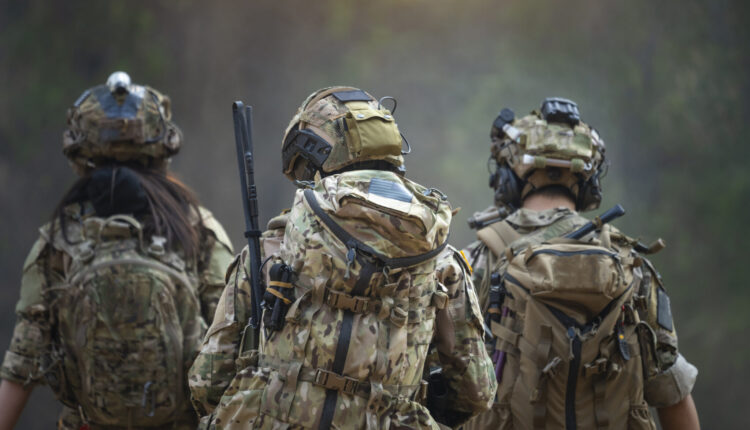 WASHINGTON — Democrats in Congress are pushing to increase access to abortion for members of the military, concerned a U.S. Supreme Court decision that could end the constitutional right will harm troops.

The U.S. House’s annual funding bill for the Defense Department would require the Pentagon to provide leave to troops and civilian employees seeking abortions. The matter has become more pressing to Democrats, given that people seeking abortions off base and outside the military health care system will need to travel away from states that ban abortions.

Many of those states expected to prohibit or greatly limit abortions are home to military installations, including Alabama, Arizona, Florida, Georgia, Tennessee and Texas.

In addition, abortion rights advocates say members of the military who want to terminate pregnancies should be able to ask for leave without fear of retaliation from a superior.

“Let’s be honest, we still have a sexual assault problem in this country, and we have one in the military,” said Rep. Betty McCollum, a Minnesota Democrat who chairs the Defense funding panel. “And why would we allow a commander to make such a personal health care decision (for) someone serving under their command?”

Maryland Republican Andy Harris tried to remove the leave provision from the Defense appropriations bill during the committee’s markup this week, arguing that commanding officers should have the ability to negotiate leave if there’s a scheduling conflict.

“This is interfering in the military in a way that this committee shouldn’t be doing,” Harris said before his amendment was rejected on a party-line vote. “I get the politics of it, but this bill is too important for this kind of politics.”

Bans on federal funding for abortion

Many Democratic lawmakers view providing broader abortion access to U.S. troops as necessary, with the U.S. Supreme Court likely poised to overturn the nationwide right to an abortion it established nearly 50 years ago and reaffirmed 30 years ago.

Currently, the military health care program, known as TRICARE, covers abortions only if the pregnancy is the result of rape or incest, or if carrying the pregnancy to term would put the patient’s life at risk — a longtime federal policy.

In order to get approval for an abortion, a doctor must certify the pregnancy would end the patient’s life if carried to term, or “a physician must note in the patient’s medical record that it is their good faith belief, based on all available information, that the pregnancy was the result of an act of rape or incest.”

That TRICARE program not only covers military members’ health care, but often that of their spouses and children.

Let’s be honest, we still have a sexual assault problem in this country, and we have one in the military. And why would we allow a commander to make such a personal health care decision (for) someone serving under their command?

Any military member within the United States who wants to seek an abortion outside those circumstances must get leave and travel to a civilian clinic at their own expense. If a military doctor doesn’t believe a woman was raped, she must also travel if she decides to terminate the pregnancy.

Military members overseas can seek off-base abortion access if they’re in a country where terminating a pregnancy is legal and the health care system is safe, though that isn’t always the case.

Lory Manning, director of government operations at the Service Women’s Action Network and a retired captain in the U.S. Navy, said while she was stationed in Panama a younger officer needed two weeks of leave to return to the United States to access legal, safe abortion.

Manning said a more junior officer likely wouldn’t have been able to afford to travel if they were in similar circumstances, another problem for those stationed in states that will have new, restrictive abortion laws.

“The military has been grappling with tight restrictions on abortion since 1979, so they’ve worked out some of the problems. But the main problem is, how do some of the more junior people pay for it, particularly in states where there’s multiple trips to the clinic required by state law?” Manning said.

Since the mid-1970s, government funding bills have barred the federal government from spending any money on abortions with limited exceptions for rape, incest or the person’s life.

Democrats in the House and Senate removed that restriction last year in their original government funding bills, but the so-called Hyde Amendment, named for former Republican Rep. Henry Hyde of Illinois, was added back into the final spending package at the insistence of Republicans.

Democrats in the U.S. House have once again removed the language from several of the annual government funding bills in an attempt to allow federal funds to go towards abortion services.

They argue that the prospect of the U.S. Supreme Court overturning the constitutional right to an abortion, a move that would let each state set its own laws, has changed the debate.

House Appropriations Chair Rosa DeLauro, a Connecticut Democrat, said that U.S. military members should be allowed to decide whether to keep or terminate a pregnancy in consultation with their doctors.

“However we feel about the decision of abortion, we should not deny a service member who has made the decision to serve our country the ability to take leave that she is entitled to for a safe and currently legal procedure,” DeLauro said.

The U.S. military, she said, has higher rates of unintended pregnancy than the civilian population, in part due to the frequency troops have to change providers and challenges obtaining contraception.

“Now is the time to empower all women to be able to make deeply personal life decisions without politicians inserting themselves into a doctor’s office,” DeLauro said. “If they, frankly, have the misfortune to be stationed in one of these 26 states, then the least we can do for them is to ensure they can take leave to obtain the medical care that they need.”

DeLauro’s comment was in reference to states where abortions will be greatly limited if the court ends the constitutional right to abortion.

California Rep. Ken Calvert, the top Republican on the Defense funding panel, argued against the provision, saying it was “unwarranted and unnecessary” since the military already has leave policies for medical purposes and mechanisms to appeal any denial of medical leave.

Calvert said he was concerned that if enacted, the policy would mean commanding officers “have to ask more questions about medical leave requests than already currently happens in practice.”

“The services can determine for themselves which leave policies are necessary to maintain readiness and don’t need Congress micromanaging those policies,” he said.

The change, Calvert warned, could prevent the bill from becoming law if Republicans in the Senate block the legislation over the leave requirement.

“Provisions like this are the surest way to prevent us from passing such a bill,” he said.

The U.S. Senate Appropriations Committee hasn’t released any of its government funding bills for the fiscal year set to begin Oct. 1, so it’s not yet clear whether they back House Democrats’ policy change.

Even if they do, Senate Republicans, who are needed to get past the legislative filibuster, could block it from becoming law when the process goes to conference later this year.

The U.S. Army and Air Force updated their policies for abortion leave within the last year, preventing commanding officers from denying leave for that purpose. Soldiers or airmen seeking to travel to a civilian facility for the procedure should just have to say they need leave for a medical procedure.

“Given the time-sensitive nature of the procedure, pregnancy termination will not require unit commander pre-approval,” the Army policy states. “However, Soldiers will keep their commander notified of any expected absences and provide the commander any new physical profiles as soon as possible. The Soldier may do this without providing the specifics of the underlying procedure.”

The Air Force policy is similar, stating; “Given the time sensitive nature of the procedure, pregnancy termination should not be considered an elective procedure for the purpose of requiring unit commander pre-approval and coordination.”

But it adds that while “commanders do not need to approve of this procedure before it occurs, they will be informed of any aftercare plans post procedure based upon necessary physical profiles, while respecting the patient’s privacy to the extent practicable.”

Manning said she expects Democrats will try to apply that language to other branches of the military, including the Marine Corps and the Navy, when the annual defense policy bill comes to the floor. That legislation, referred to as the National Defense Authorization Act or NDAA, is separate from the annual defense funding bill.

Kelly Blanchard, president of Ibis Reproductive Health, which has spent years researching sexual and reproductive health care in the U.S. military, said rates of unintended pregnancy in the military are higher than for civilians.

Ibis’ research has shown that U.S. military members “have experienced retaliation” for seeking abortions off base.

“We have a number of stories from folks about their commander telling other people, or the person who they had to ask for leave disclosing,” Blanchard said. “And then it becomes an issue of how people react to that and knowing that personal information.”

They’re going to be stationed in places where they can’t get abortion care. They may face leave policies that are restrictive or retaliation. And the worst case scenario, which is very real, is that they can be forced to carry an unwanted pregnancy.

The policy language in the House Defense Appropriations bill that would prevent the military from denying leave for military member who want or need to get an abortion carries good intentions, she said.

In order to avoid possible harm to their careers or reputation in the military, some military members who want, or need, to access abortion have “sourced medication abortion pills from online from global online services,” Blanchard said.

“Self managed abortion with pills is highly safe and effective even without a clinical support from a clinical provider,” Blanchard said. “But it’s also true that people should have the opportunity to access care with a clinical provider if they want and access to follow-up care and all the things they may need.”

Jackii Wang, legislative analyst for the National Women’s Law Center’s reproductive rights and health team, said the language in the House Defense spending bill is “a great first step,” though she noted service members will continue to face challenges even if it’s included in the final package.

“We know that after the Supreme Court decision comes down, there’s going to be a tremendous, tremendous amount of chaos across the country for millions of people. And that will include the over 400,000 women who serve in the armed forces and in the reserves,” Wang said.

There are several “unique” challenges service members and military families will face following the court’s decision, Wang said, including how to get leave and afford to travel if they want or need an abortion.

“After the Supreme Court dismantles Roe vs. Wade, they are going to be left with so few options,” Wang said. “And so many of them are junior service members, who don’t make a lot of money, who don’t have any resources to leave base.”

“They’re going to be stationed in places where they can’t get abortion care. They may face leave policies that are restrictive or retaliation,” Wang continued. “And the worst case scenario, which is very real, is that they can be forced to carry an unwanted pregnancy.”