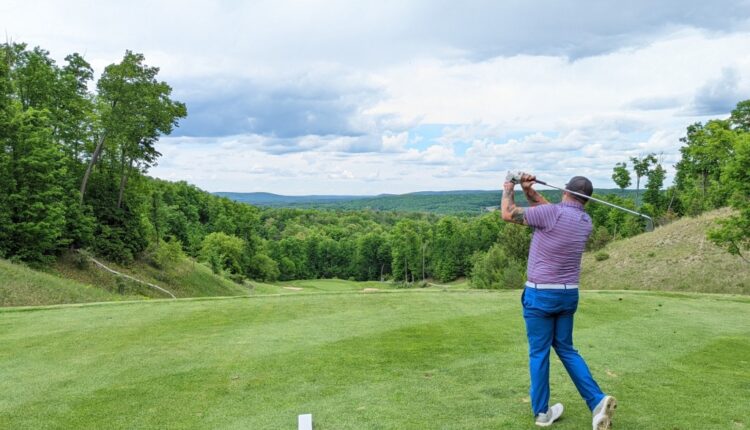 One of the most enduringly popular destinations in the “Up North” region of Michigan’s lower peninsula bills itself as Gaylord Golf Mecca.

Anchored in Gaylord, a city of 4,200 astride Interstate 75 and Michigan Route 32, the destination’s attractions include 17 golf courses, two full-service resorts and 90 inland lakes, including picturesque Otsego Lake.

The Gaylord area also offers a sprawling network of hiking and biking trails, numerous public parks and a quaint downtown strip with an Alpine Village motif.

During a recent visit to Gaylord, I joined seven other golf-travel writers in playing seven of the 17 featured courses.

We had two-night stays at the Otsego and Treetops resorts, both of which do brisk business during the winter months with their ski slopes and trails. The resorts are within several minutes’ driving distance of the downtown strip.

While at Treetops, we were housed in the main lodge, with its comfortable guest rooms, spa and indoor-outdoor pool.

At Otsego, we stayed in the Hilltop Lodge. The lodge has eight guest rooms with dinettes and a shared great room that makes it an attractive option for groups.

Those staying in the eight suites at Otsego Resort’s Hilltop Lodge share the comforts and amenities of this Great Room. (Courtesy of Gaylord Golf Mecca)

There are on-site restaurants at the two resorts.

In between rounds of golf, we got guided tours of the Gaylord area that included quick visits to area parks and browsing some of the downtown shops.

On one of the tours, we viewed damage done to homes and businesses by the May 20 tornado that cut an erratic path through the Gaylord area. Two deaths and 44 injuries were attributed to the tornado — a rare occurrence this far north.

Paul Beachnau, executive director of the Gaylord Area Convention and Tourism Bureau, said the resorts, golf courses and other recreation venues in the area rode out the storm and quickly resumed full operations.

Among our stops for evening meals in Gaylord were Big Buck Brewery and Bennethum’s Northern Inn. Both paired first-rate selections of food and beverages with a welcoming, down-home atmosphere.

Within the context of Michigan being a Midwest golf hotbed with more than 800 courses, it is understandable why the Gaylord Area Convention and Tourism Bureau uses the area’s collection of first-rate courses as a drawing card for potential visitors.

With its nine holes carved through the kind of tree-lined, rolling terrain that is the backdrop for nearly all of the courses in the area, Threetops challenges a golfer’s creativity and shotmaking skills.

Next on the agenda at Treetops was the Rick Smith-designed Signature Course. With six sets of tees, signature tests every aspect of the game without sapping the golfer’s spirit.

The Rick Smith-designed Signature Course at Treetops Resort tests every aspect of the game without sapping the golfer’s spirit. (Courtesy of Gaylord Golf Mecca)

We did not play the Tom Fazio Premier, Robert Trent Jones Jr. Masterpiece or Tradition courses at Treetops. All are highly regarded by national publications specializing in golf destinations.

We did not play Classic, which has a shorter, generally open layout geared to a more casual brand of golf.

Tribute, which we did play, is a much longer, topographically and visually spectacular track that is not for the faint of heart.

Gaylord Golf Club — formerly was a private country club — is open to the public. It’s beautifully conditioned with devilishly contoured greens that offer nary a straight putt.

Black Lake, about 30 minutes northeast of Gaylord in Onaway, is a challenging, Rees Jones-designed layout owned by the United Auto Workers.

We played nine holes at the scenic, user-friendly Indian River on the same jaunt that took us to Black Lake. The Natural, on the east side of Otsego Lake, offers a blend of straightforward and challenging holes.

It offers attractive price points of stay and play packages.

Gaylord is 400 miles from downtown Cleveland. I made the trip by car, taking the Ohio Turnpike to IInterstate 280 north (Toledo) to Interstate 75 north. Beyond the usual traffic issues caused by road work on I-75 between the Ohio-Michigan line and the northern suburbs of Detroit, the journey was uneventful. Gaylord is at Exit 282 off I-75.

Flights from Cleveland Hopkins International Airport are available on United, Delta and American airlines to Cherry Capital Airport in Traverse City, Michigan, about 50 minutes from Gaylord. As of this writing, the average round-trip fare is $400.

Otsego Resort: otsegoresort.com or 989-732-5181. If you choose to book here, reach out to sales manager Tracy Henley at [email protected] to pull together a customized stay-and-play package.