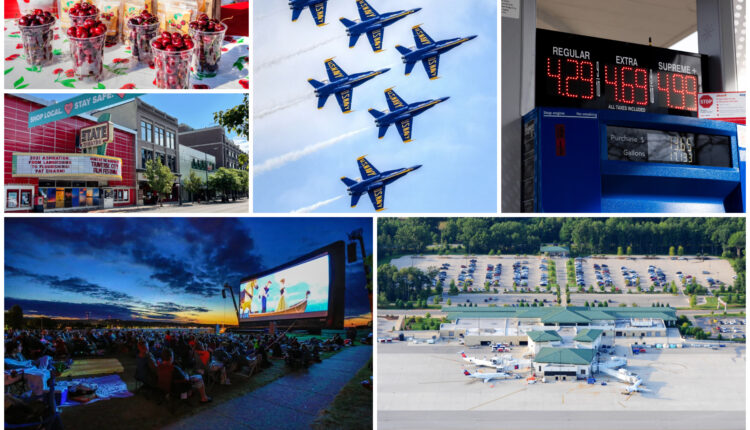 It’s a prospect that local residents, businesses, event organizers, and tourism professionals have been hoping for since COVID-19 waylaid Traverse City’s economy in 2020. 2022 might just be the year where “normal” and “summer” coalesce once more.

But after two years of safety protocols, depressed travel patterns, down revenues and misplaced optimism, does a 2010s kind of “normal” even still exist for Traverse City? Below, we explore the hopes and dreams of summer 2022.

1. How much ground is left to make up?
A year ago, the question was whether 2021 would prove to be the biggest tourism season in Traverse City’s history. The reality was a little less rosy than the expectations.

The arrival of the delta variant in the second half of summer 2021 put an end to any “pandemic is over” talk. The Cherry Festival only came back at partial strength (sans key staples like the Cherry Royale Parade and the air show), while other top tourism events – such as the Bayshore Marathon and the Traverse City Film Festival – took a second consecutive year off.

“Last year was a decent year,” says Trevor Tkach, president and CEO of Traverse City Tourism. “We did not get back to 2019 level occupancy levels for the hotels in Grand Traverse County. But it was definitely much better than 2020. We were off by more than 25 percent [in 2020]. Overall occupancy for last year was still down 9.1 percent compared to 2019.”

Tkach expects occupancy numbers and overall tourism activity will continue to rebound this year, but he’s hesitant to predict a full rejuvenation. Certain variables, he says – such as gas prices, inflation, and workforce shortages – are limiting Traverse City’s rebound.

While those obstacles could indeed get in the way of Traverse City making up the 10-percent gap it still needs to clear in order to get back to 2019 tourism numbers, there are big positive notes, too. The biggest one? The full return of Traverse City’s festival and event slate.

Where last summer only had a partial lineup, this summer’s calendar looks a lot more normal. The Bayshore Marathon marked a grand return over the weekend by drawing thousands of runners to Old Mission Peninsula. Interlochen Arts Center is back to a full concert schedule this summer after a truncated August-and-September slate last year. The Traverse City Film Festival is scheduled for July 26-31. And the National Cherry Festival will restore all of its biggest traditions this July, including an air show featuring the Blue Angels, a big parade on Front Street and concerts at the Open Space.

2. How will travel challenges impact tourism?
Nationwide, gas prices averaged $4.17 per gallon nationwide in April – more than a dollar per gallon higher than the $3.06 that was last summer’s average. The US Energy Information Administration is predicting that regular-grade gasoline prices will drop a bit this summer, averaging $3.84 for the season. But even that price is significantly higher than what travelers saw a year ago, and would still be the highest summer average for gas prices since 2014.

It’s not just gas prices. The United States air travel market has yet to adjust fully to a post-pandemic ecosystem, which could make 2022 a summer of endless flight cancellations and delays for American travelers. Per flight tracking site FlightAware, there were nearly 6,000 flight delays “within, into, or out of” the US on May 16, and more than 1,000 flight cancellations.

When asked how Cherry Capital Airport (TVC) is holding up amidst industry-wide growing pains, CEO Kevin Klein says that all of TVC’s nonstop routes will be back this summer, but with changes in schedules. The airport’s nonstop Atlanta and Charlotte flights, for instance, are now scheduled to be on weekends only instead of daily. At the same time, TVC’s Denver flight is moving from once daily service to twice a day, and the airport’s United Airlines Chicago route is increasing its number of seats in the morning.

Ultimately, Klein expects that TVC’s overall capacity for June and August “will be very similar to the number of passengers flown through last year” – a positive hold, given that 2022 was a record year for TVC.

3. How hard will staffing issues hit summer tourism?
As Traverse City stars down the possibility of a pre-pandemic level of summer tourist traffic, one important question is: Can the region’s labor-strapped businesses withstand the massive crowds that a once-typical northern Michigan summer brings?

That question is particularly concerning to Traverse City Film Festival Founder Michael Moore, as he prepares to bring the festival back for the first time since 2019.

“At least right now, many of the downtown restaurants don’t open until 5pm because they can’t get the workers,” Moore said. “Well, how do you think the Traverse City Film Festival is going to run? We start showing movies at 9am. There’s not going to be places for breakfast? Or lunch?”

It’s not necessarily that there are no restaurants open for lunch. Rather, it’s that different restaurants are picking their spots and focusing on specific days or times of day, versus trying to tick every box. Dave Denison, owner of Amical, thinks that approach might be the new normal for the local restaurant scene – at least until such a time that restaurants like his can find more help.

Once a popular lunch-and-dinner destination, Amical scrapped its brunch and lunch service early in the pandemic and has yet to bring it back. While Denison says that adding lunch back into the rotation is “on the radar,” he doesn’t see it happening in 2022.

“We know the summertime is going to be busy, but we’re not thinking ‘Oh, it’s going to be busy, so let’s open for lunch in June,'” Dension says. “Trying to wedge that in, I don’t think that’s a great idea for our brand. We don’t want to just throw more money and time and energy at something that might not work, and screw up what we do at night… If the biggest complaint is ‘I can’t get a table when I want one,’ versus ‘It took 45 minutes to get my cold food,’ I’ll take the first complaint.”

4. Will Airbnb’s impact continue to grow?
While hotel occupancy in 2020 and 2021 was down from pre-pandemic times, there is one asterisk to point out when considering how big tourism has been for the past two years – and how big it could be this summer. That asterisk is Airbnb, which has only grown in Traverse City since the start of the pandemic.

Those dollar numbers likely translate to tens of thousands of guests, but there’s no local mechanism for tracking them in the way that Traverse City Tourism tracks hotel occupancy numbers. So, even if Traverse City were to have its busiest tourism summer ever this summer, it wouldn’t necessarily be easy to quantify.

Combine the lack of local tracking with the fact that Airbnb mostly reports geographic-driven data after the fact, and it becomes clear that short-term rentals are not just northern Michigan’s asterisk when it comes to assessing any given tourism season, but also the biggest wildcard.

Traverse City could break records for summer tourist traffic and even local experts might never know it because so many visitors stay in rentals distributed across hundreds of local neighborhoods. With the local housing market more chaotic than ever before – in terms of inventory, pricing and sheer demand – and with state legislators considering bills that would limit local communities in their ability to regulate short-term rentals, the summer of 2022 could prove to be a crucial season to watch for Airbnb activity in the region.

5. What impact will COVID-19 have?
So far, every hope for “a return to pre-pandemic normal” has been followed by a reckoning with COVID-19. Per Grand Traverse County Health Department data, the county had tracked about 6,000 total COVID cases as of May 1, 2021. The county’s total cumulative case number is now up above 18,000.

Summer 2021 started with optimism about rising vaccination rates and a prevailing feeling that northern Michigan had seen the worst of the pandemic. If the numbers above show anything, it’s that those proclamations were premature. The question is whether attempts at full “back to normal” behaviors are still premature, or if the story this summer will be different.

Per a recent USA Today article on endemicity, US health experts still aren’t ready to label COVID-19 an endemic just yet. Those same experts expect cases to rise this summer, but are also predicting a less devastating wave than the last two summers or this past winter’s omicron surge.

Still, rising COVID case numbers in Grand Traverse County have pushed the county into the high-risk tier again, per the Centers for Disease Control and Prevention (CDC). CDC data from May 12 shows that the county has 238.48 cases per 100,000 people, and 16.6 COVID hospitalizations per 100,000. High risk of transmission comes with recommendations from the CDC to wear masks in indoor, public places.

This is an excerpt from a longer story that appears in the new June issue of the Traverse City Business News, available to subscribers and on newsstands Wednesday.

Downtown Detroit apartments reach day three with no energy, or A/C ahead of hot weekend