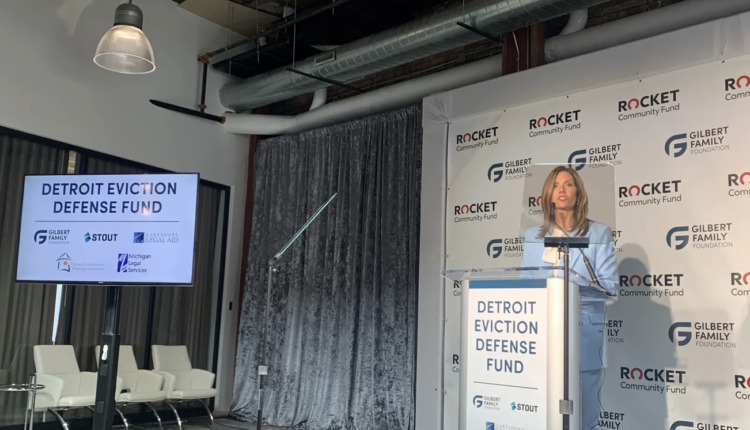 Low-income Detroiters facing eviction received a $12-million boost that will help them get lawyers in 36th District Court, where — prior to the COVID-19 pandemic — thousands of evictions were filed each year and where most tenants didn’t have legal representation but their landlords did.

“As the pandemic eases, we have an opportunity as a community to create a new normal, a normal where low-income renters have an advocate at their side at a critical time in their lives,” said Laura Grannemann, executive director of the Gilbert Family Foundation.

“Someone who can help them negotiate for more time to move so that their family does not enter homelessness. Someone who can truly represent the extensive safety concerns that too often exist in investment properties. Someone who can connect families to life changing resources at a pivotal moment.”

About 4% of tenants were represented by a lawyer in 36th District Court, compared with 83% of landlords, according to a report released Monday by consulting firm Stout. Those with legal representation were 18 times more likely to avoid the repercussions of a potential eviction such as homelessness, school disruptions and difficulties finding new housing, compared with those without lawyers.

The donation announcement comes after the Detroit City Council earlier this month unanimously passed an ordinance providing free lawyers for low-income Detroiters with eviction cases, making the city the 15th across the nation to offer such counsel.

“We will be more financially stable in Detroit and around the region (with such counsel). We will also be able to stabilize our neighborhoods and maintain and grow our population,” said Detroit City Council President Mary Sheffield.

The ordinance was lauded by housing advocates as a game changer for residents but a lingering question remains — how will the program be funded in the long term?

The Stout report estimates that fully implementing a right to counsel program in Detroit will cost about $16.7 million annually.

Initially, Detroit’s right to counsel program is being funded by $6 million in federal American Rescue Plan Act dollars, from a total pot of $18 million over three years that the council earmarked in a resolution last month. Subsequent funding, following the first year’s use of the federal pandemic aid dollars, must be requested from the administration, Sheffield said.

The Gilbert Family Foundation’s contribution will add $4 million a year (for three years) to the federal dollars, for  a combined $10 million in federal and philanthropic support the first year.

“We’re hoping that more philanthropic partnerships step in. This is a need. The data is there, the economic impact is there,” Sheffield said.

Monday’s donation from the Gilbert Family Foundation fills in gaps but more is needed. Requesting general fund dollars isn’t off the table, despite concerns about the legality of such a move, along with asking for support from the state, she said.

The Detroit Eviction Defense Fund will provide full legal services for families making 50% of the area median income with a child in the home. That translates to $31,350 for a one-person household and $44,750 for a family of four.

Along with the $12 million to the three organizations — the United Community Housing Coalition, Michigan Legal Services and Lakeshore Legal Aid — another $1 million will go toward a study tracking the effectiveness of the Detroit Eviction Defense Fund and eviction defense in Detroit in general.

The three nonprofits will run the program by hiring lawyers and legal aids embedded in 36th District Court. That begins June 1.

In emergency cases, the funding also will be able to provide legal help for seniors, families with housing vouchers and those with disabilities.

“This is a huge moment for the people of Detroit, knowing that one day soon if they are facing eviction, they will have an attorney with them to help them through the process and represent them. It’s true that this is just the beginning. We aren’t yet fully funded and we’re just getting started,” said Ashley Lowe, CEO of Lakeshore Legal Aid.

In one instance, a mother of two who lost her job in the pandemic fell behind on rent and her landlord filed to evict her, Lowe said. In virtual court, this client described the conditions of her home — exposed wires that created a fire hazard and leaks. Her legal aid attorney was able to get more than $10,000 in back and future rent and made sure repairs were made before the landlord got the dollars.

Being able to continue to support Detroiters facing eviction is especially important as a statewide rent aid program wraps up this year.

“Before these federal COVID relief funds helped pay for lawyers, only 4% of tenants were represented, 46% of cases resulted in a default and tenants were evicted at staggering rates,” she said.

Evictions are an ongoing concern in Detroit, exacerbated by the pandemic’s economic upheaval. Eviction filings fell drastically early in the pandemic because of safety nets such as eviction moratoriums, legal aid and rent assistance, according to a University of Michigan study.

A writ, or order of eviction, is signed by a judge and allows a court officer to remove a tenant and their personal belongings from a rental property.

From January to April, 747 orders of eviction were signed.

Monday’s announcement did not come without pushback from some Detroit activists who argue that the city’s right to counsel program should be publicly funded, rather than through philanthropic donations.

“Publicly funding the right to counsel ordinance would not only protect communities of color, but also provide housing stability to thousands of Detroiters,” Branden Snyder, co-executive director at Detroit Action, said in a statement Monday.

authored by
First published at https%3A%2F%2Fwww.bridgedetroit.com%2F12m-gilbert-donation-to-help-pay-for-lawyers-for-low-income-detroiters-facing-eviction%2F