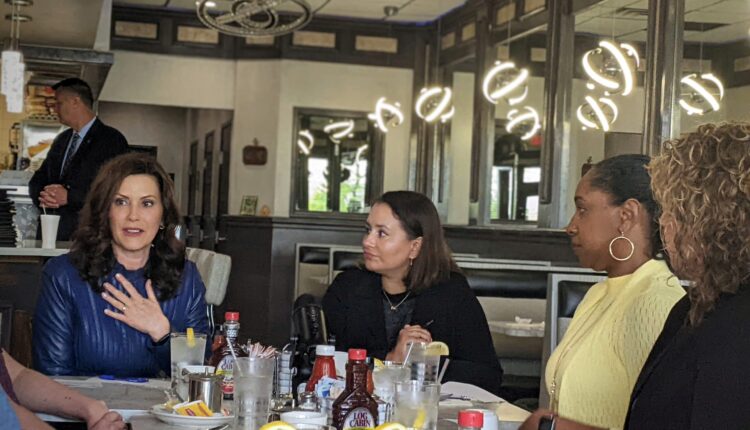 “Women are targeted enough as it is, with domestic violence, and now this,” stay-at-home mom Angel Lau of Oakland County told Gov. Gretchen Whitmer, Dr. Natasha Bagdasarian of the Michigan Department of Health and Human Services (DHHS) and a tableful of mostly women Michiganders at a Sterling Heights Coney Island on Wednesday.

Whitmer and the state’s chief medical executive sat and listened while seven women and one man from Southeast Michigan, expressed their perspectives at the restaurant on the importance of protecting reproductive rights in the state.

Andrea Jones, a bakery owner in Macomb County with three children, said she was “angry” when a draft decision from the U.S. Supreme Court leaked last month that showed the court’s intention to overturn the 1973 landmark Roe v. Wade decision.

She described the difficult decision she made to have an abortion when she knew she couldn’t take care of more children than she had, and the judgement that she faced because of it.

“That’s my business,” Jones said. “… I am so disappointed in the number of people that are not able to walk in someone else’s shoes.”

In addition to her ongoing lawsuit that seeks to preserve abortion rights in Michigan, Whitmer announced during the roundtable Wednesday that she has signed an executive directive instructing state departments and agencies to not cooperate with out-of-state authorities looking to prosecute women who seek abortion care in Michigan.

If the U.S. Supreme Court does overturn Roe, Americans’ constitutional right to abortion access would be no longer and abortion laws would be up to the states.

Many states, including Michigan, have “trigger laws” that would immediately go into effect and stifle the reproductive rights of residents.

Michigan’s law from 1931 is among the most restrictive in the nation. It would make all abortions in the state a felony, unless to save the life of the pregnant woman.

Whitmer’s lawsuit seeks to recognize the right to an abortion under the state Constitution and to strike down the state’s 1931 abortion ban law. The Michigan Supreme Court has granted the injunction requested in the case, effectively pausing enforcement of the abortion ban, until the court makes a final decision.

The court is seeking additional information from Whitmer within the next week before making a decision.

Simultaneously, Planned Parenthood is suing Attorney General Dana Nessel to achieve the same effect, despite Nessel supporting abortion rights and vowing repeatedly that she would never enforce the 1931 abortion law. A judge last week granted a preliminary injunction in the case that effectively stalls enforcement of the old law if Roe is overturned, but that case is facing challenges from anti-abortion groups. Whitmer said she is going to “fight like hell” and use “every tool” at her disposal to oppose attempts to turn back the clock on abortion rights, which includes supporting the Planned Parenthood lawsuit.

“I think that we’ve got to be using every tool to protect women and our ability to make their own decisions around our healthcare,” Whitmer said. “… We’re all working toward the same goal.”

Mike DiClaudio, a partner at KPMG Accounting, was the lone man at the round table Wednesday. He added his two cents as an “ally” of the reproductive rights movement, and advised Whitmer to be unapologetic in her fight against anti-abortion policies.

Danielle Vivio, a teacher in Oakland County, said she was hoping to see women’s rights progressing toward a “better place” as her children got older.

“Nobody who has that [anti-abortion] opinion has to get an abortion,” added Michaelle Halsbadn, an office manager in Oakland County. She said the idea of the government monitoring reproductive decisions is “invasive.”

La Sonya Chambers of Oakland County said she fears for what else Republicans will attempt to restrict, like birth control and emergency contraceptive pills.

“This is just the beginning of what they’re trying to do,” Chambers said.

Chambers shared that she was abducted and raped when she was 18 after growing up in a religious family that did not support abortion. She made the choice to have the procedure, and went on to have three children as an adult.

“It’s not a decision that we make lightly. And that’s what they need to understand,” Chamber said. “Everything — physically, mentally, emotionally, spiritually — is on the woman’s shoulders.”

Whitmer thanked Chambers and the others for sharing their personal stories, noting that as a state senator she shared publicly that she had been raped while speaking against a restrictive abortion bill in 2013. She emphasized that the best thing citizens can do is to vote for candidates who support reproductive rights in Michigan and beyond.

Because of the newly drawn district maps from Michigan’s first citizen-led redistricting panel, we “have an opportunity to make sure that the people that we send there are reflective of these values.” Whitmer said.

Cheryl Sagal of Macomb County recounted having two miscarriages and the deliberations she made when having her child. One pregnancy involved numerous tests, contradictory results and weeks of waiting before she was able to determine her next steps.

Having to wait so long in between steps of the process, particularly in states like Texas with more restrictive laws, is “like torture,” Jones said.

Bagdasarian moderated the discussion but also added some comments. She said she worries about the fact that restricting abortion rights encroach on the doctor-patient relationship.

“This is not just about abortion, per se, but about reproductive health overall,” Bagdasarian said. Bishop Bonnie Perry of the Episcopal Diocese of Michigan spoke from a faith-based perspective. She said the last thing she wants is to see the separation of church and state be eroded.

“I do not believe that any one religion should be able to impact its views or its values on another group of people,” Perry said.

During her time as a pastor before becoming a bishop, she said she helped counsel a couple who already had two children and were struggling with the idea of having an abortion. Perry said the emotional meeting ended with the couple “reverently” making the decision to abort the fetus, which was not made lightly.

Abortions should be “safe, accessible, rare, medically informed — not dictated by what you can legislate,” Perry said.

She quoted Benedictine Sr. Joan Chittister, a Roman Catholic nun who famously said in 2004: “I do not believe that just because you are opposed to abortion, that that makes you pro-life. In fact, I think in many cases, your morality is deeply lacking if all you want is a child born but not a child fed, a child educated, a child housed. And why would I think that you don’t? Because you don’t want any tax money to go there. That’s not pro-life. That’s pro-birth.”