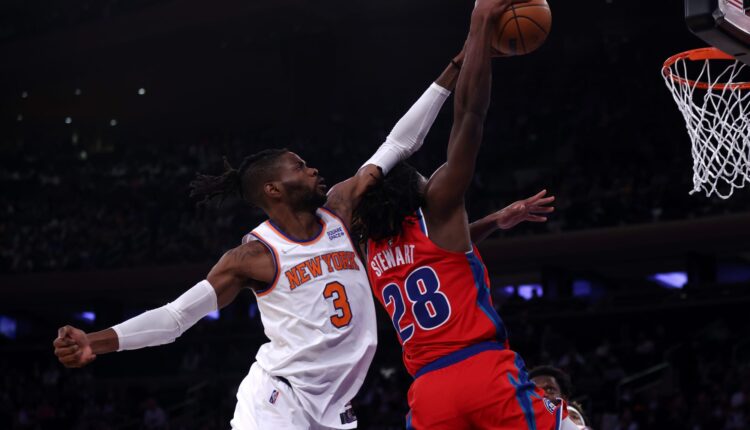 The Detroit Pistons traded for veterans Alec Burks and Nerlens Noel from the New York Knicks in exchange for cap space.

It wasn’t a “win now” move by any means, as neither of these guys are All-Star talents, though they both have skills the Pistons need.

Noel brings a veteran rim protector who gives them the shot blocker they lacked, and Burks has shot over 40 percent from 3-point range, which is something Detroit obviously needs after being near the bottom of the league in long-range shooting.

They will likely make the Detroit Pistons better in the short term, though neither are going to move the needle enough to push Detroit into playoff contention, at least not yet.

But even if these two don’t propel the Pistons into the playoffs, they will help the team in several ways.

Detroit Pistons: Alec Burks and Nerlens Noels are placeholders for the rookies

Both Jaden Ivey and Jalen Duren are high-ceiling talents who were atop the Pistons’ draft board, so fans should absolutely be excited that both landed in Detroit.

But we can expect some rookie road bumps, especially for Duren, who is only 18-years-old and will be the youngest player in the NBA.

Burks and Noel will allow the Detroit Pistons to not dump huge responsibilities onto their two rookies as they did last season with Cade Cunningham.

The “trial by fire” works for some guys, but it can also crush confidence and actually slow down development when a player is given a burden they are not ready for.

I think both rookies are going to play a lot of minutes and get plenty of run next season, but now the Detroit Pistons have a couple of guys who can temper that burden somewhat, which is valuable when you are trying to make rookies earn minutes.

Neither Noel or Burks will be in Detroit for the long term, but in the short term they give the team more flexibility and competition which is always a good thing.