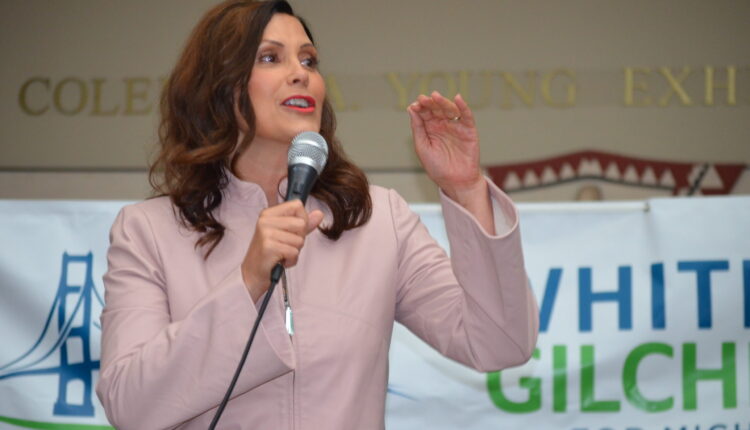 Dixon’s win sets up the first Michigan gubernatorial election in which both the Democratic and Republican nominees are women, which Whitmer was asked about at the event.

“Frankly, that’s less important than how stark the differences are,” said Whitmer to reporters without mentioning Dixon by name. “We have forged a problem-solving. We are tough. We’ve shown that we’ve been tested and still delivering in a bipartisan way even with all the craziness that we’ve had to confront and still delivering for people in this state. We have a very stark decision to make.

“We have an alternative that is still into conspiracy theorists, calls the last election fraudulent and fake, and has blocked efforts to keep our kids in school and safe. They want to strip womens’ reproductive rights. So, this is a stark difference. Because there are two people of the same gender doesn’t mean that we are a lot alike.”

Republicans have been stressing gender in the gubernatorial race in attacks on Whitmer.

At a party “unity” luncheon in Lansing Wednesday, Michigan GOP Co-Chair Meshawn Maddock referred to Dixon as a “younger, smarter and hotter” version of Whitmer.

Meanwhile, Whitmer this week continued her effort to urge the Michigan Supreme Court to consider her lawsuit from April that centers on protecting the right to abortion. She secured on Wednesday a temporary restraining order against prosecutors with abortion clinics in their counties, ensuring those health care professionals can provide service.

“We will continue to fight every step of the way because this is too important for women to be able to decide on our lives and make their own decisions,” Whitmer told reporters.

Dixon supports Michigan’s 1931 law banning abortion. She has said she supports an exception for the mother’s life, but not for rape, incest or the mother’s health. Last month, she came under fire when she was asked by an interviewer if a 14-year-old incest victim should have to give birth. Dixon said that was a “perfect example” of her anti-abortion position.

EV chargers in Detroit go where ‘money is,’ leaving Black neighborhoods out