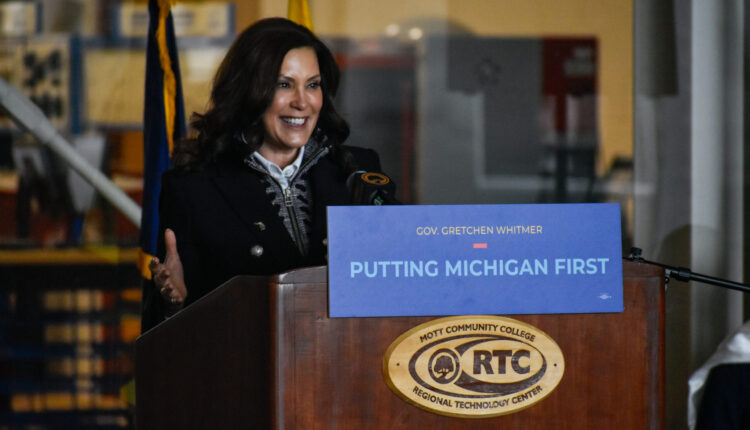 In her fourth State of the State speech Wednesday evening, Gov. Gretchen Whitmer chose to hone in on themes of bipartisanship and teamwork with Republicans after a whirlwind three years of public policy clashes with them on budget issues, COVID-19 restrictions and more.

GOP legislators, in response, didn’t return the favor, in a preview of what’s expected to be a bitter election year featuring Whitmer, the entire state House and most of the state Senate on the ballot. Republicans largely issued criticism they’ve previously leveled against the Democrat’s response to the ongoing COVID-19 pandemic.

Both before and after Whitmer’s address, Senate Majority Leader Mike Shirkey (R-Clarklake) said it is time for a change from Whitmer’s “ineffectual” leadership.

“We must reset our course. We must reestablish precious freedoms. … Senate Republicans recognize citizens of Michigan are ready to transition from today’s fear to tomorrow’s future,” Shirkey said in a statement following the speech.

“Unfortunately, Gov. Whitmer’s big moment tonight did little but celebrate other people’s accomplishments and look backward toward things that have already been done or are already in the works,” Wentworth said Wednesday evening.

“… Instead of offering any new ideas or policies, Gov. Whitmer spent what may be her final State of the State address talking about things other people have already done to help.”

Shirkey also spoke about the speech during a radio appearance Thursday but seemed to take on a more optimistic tone, telling “All Talk” hosts on WJR-AM Detroit that he agrees with some priorities but wants Whitmer to take more action.

“There are a number of things in her list of priorities that I believe we can actually make some progress on, but there’s still some very big remaining questions that deserve more attention than just lip service,” Shirkey said, citing school shutdowns due to COVID-19 as an example.

In her speech, Whitmer called for schools to reopen, as some have had to switch to virtual because of COVID-19 outbreaks. There are no statewide mandates in place for schools, and decisions regarding masks and virtual versus in-person learning are made on the local level.

Shirkey said he supports Whitmer’s focus on mental health and her general goal of tax relief, although he is “not too interested in selective tax reductions.”

“We need to see the actions line up with the narrative and the rhetoric. But still, I’m going to hold out some hope. We’ve gotten behind some of this stuff, and if she’s serious about behavioral health and she’s serious about tax relief, by golly, we can do that,” Shirkey said.

Several other Republican lawmakers chimed in with their take on Whitmer’s speech. Most were critical of the governor’s new proposals. Matt Hall (R-Marshall), chair of the House Tax Policy Committee, pushed back against the governor’s claims that her new “wish list” proposals will save taxpayers money.

“Gov. Whitmer has shown she is ready and willing to spend taxpayer money to fund her campaign promises. But the Legislature is committed to saving taxpayers money as they see costs rising everywhere,” Hall said. “We need a sensible approach that will get people further along in life, instead of reaching further into their pockets to fund government wish lists.”

Speaking specifically to Whitmer’s proposal increasing the Earned Income Tax Credit (EITC) for working-class families, Hall seemed to disagree that the EITC should be restored to pre-2011 levels. He highlighted the small percentage of erroneous EITC claims and the fact that the state is already “embroiled in fraud problems” from unemployment claims, and argued instead for “sensible tax reductions” without providing further details.

Hall also does not support Whitmer’s push for electric vehicle rebates, saying there is enough interest there already.

State Rep. Joe Bellino (R-Monroe) said he is happy to hear that Whitmer is on board with repealing the controversial “retirement tax.” That policy was signed into law by GOP former Gov. Rick Snyder in 2011 to pay for his $2 billion annual business tax cut, despite a large outcry from retirees who opposed their pensions being taxed.

“I am encouraged to hear the governor express support on repealing the pension tax. I proposed my plan to do so a full year ago, and have worked on this issue since joining the Legislature in 2017,” Bellino said.

“Michigan retirees who were promised tax-free public pensions were being penalized by their state government, which should never be the case. Now, we can rightfully encourage our senior citizens to spend their retirement here in Michigan.”

Bellino ended his statement by criticizing Whitmer’s administration for not being more transparent about COVID-19 deaths in nursing homes.

“It’s clear the Legislature has been doing its job, and a good job at that. I hope the governor continues to use us as allies, and not foe,” he added.

State Rep. Timmy Beson (R-Bangor Twp.), said he “hope[s] the governor’s praise for business relief will carry over to other pro-small-business plans.” On Wednesday, the Michigan House approved a $184.6 million relief plan for businesses financially affected by the pandemic while continuing to blame Whitmer for their hardships. The funds come from federal COVID-19 relief.

“There’s still no ‘business as usual’ in Michigan — thousands of job providers are fighting for survival, and thousands of people still aren’t working or earning at the level they were before the pandemic began,” said Thomas Albert (R-Lowell), who chairs the House Appropriations Committee.

“This all started with the governor’s shutdown orders in 2020. Now the problems are runaway inflation, supply and labor shortages, and customers changing their buying patterns because of the pandemic,” Albert said.

House Bill 5524, which supporters say will help restaurants, tourism, entertainment, health centers and more, will now head to the Senate for consideration.