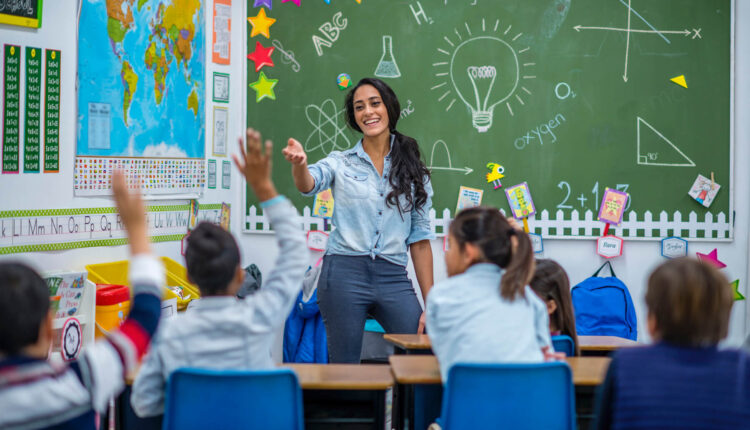 Where Whitmer and Dixon stand on public education, vouchers and school safety ⋆

Democratic Gov. Gretchen Whitmer and GOP gubernatorial nominee Tudor Dixon haven’t had much in common during their time on the campaign trail, but they have both put education high on their list of priorities.

However, their proposals to address issues in the state’s K-12 education system couldn’t be more different.

Dixon, who will be facing off against Whitmer on Nov. 8, has spent recent weeks focused on education, but mostly around right-wing cultural issues like critical race theory in school curricula, which isn’t being taught in the vast majority of Michigan’s K-12 schools, a “Don’t Say Gay”-style law and book banning.

Whitmer, on the other hand, has been touting her accomplishments in public education over the past four years, including signing the largest education budget in Michigan history for Fiscal Year 2023 that includes more funding for mental health.

During a debate with Whitmer in Grand Rapids last week, Dixon said she wants “parents involved in their child’s education. And we want to go back to the basics, making sure our kids know how to read, write and do math.”

Both candidates have weighed in on other important education issues, like vouchers, tutoring, school safety and more.

Here’s a roundup of how both candidates would approach education if they were to win the next four years in the governor’s office.

Dixon’s ‘back to basics’ approach

While she has some proposals she supports around education, much of messaging have been about banning “pornographic” books in schools, barring transgender girls from participating in school sports on the team that aligns with their gender identity and restricting educators from talking about gender and sexuality in the schools.

Much of these talking points have trickled down from national figures like far-right activist Christopher Rufo, who spearheaded the CRT fight, and former President Donald Trump.

When asked to expand on these issues and whether she would support legislation already introduced in Michigan, Dixon has repeatedly dodged specific questions, such as if she would sign related legislation or what books she would ban. Instead, her spokesperson has issued a statement.

Dixon demands action on book bans, ‘grooming’ and more — but she’s quiet on the details

“What Tudor wants to accomplish is very simple and common sense. She wants to get radical sex and gender theory out of our schools, remove classroom instruction of sexual orientation and gender identity for grades K-3, make sure gender specific sports remain gender specific given biological differences in boys vs. girls and post all curriculum online for parents to see and be involved in their child’s education,” said Dixon spokesperson Sara Broadwater earlier this month. “Every child deserves a world class education and parents should be in charge of it.”

Her other top priorities include expanding private schools and tutoring companies by funneling state funding to private companies. Dixon, who lives in Muskegon County, sends her four children to private schools. She told the Advance last month at a press conference that she had not decided where she would send her kids to school if she won the governorship.

The education savings accounts Dixon is referencing is part of the Let MI Kids Learn campaign, a ballot measure which is backed by former U.S. Education Secretary Betsy DeVos, a longtime advocate and funder of school choice and charter schools.

The group, which submitted petitions too late to get on the 2022 ballot, aims to create the Student Opportunity Scholarship Program to pay tuition and fees in K-12 public or private schools, homeschooling materials and online learning programs for students with financial need, and to make contributions to the program tax deductible.

If the initiatives did garner enough signatures, they could go on the 2024 ballot. But first, the Legislature, which currently is GOP-controlled, could adopt the petitions. In Michigan, the governor has no power to veto citizen-led petitions.

A Dixon spokesperson did not respond to requests for comment for this story. During the debate, Whitmer criticized DeVos’ involvement in Dixon’s campaign and how that might affect education policies if Dixon is elected.

“The Betsy DeVos voucher plan might help Betsy DeVos, and it might help Tudor Dixon, too, because her kids go to private schools. I don’t have a problem with kids going to private schools. That’s her choice. But the fact of the matter is that most kids don’t have those options,” Whitmer said. “And that’s why we’ve got to improve the education system across the state of Michigan so that every child has a great education.”

The other priority Dixon has is to “fund 25 hours of one-on-one or small group tutoring in reading and math for every student in Michigan” using some of the state’s federal COVID-19 relief funding.

However, the funding could go to many private, virtual tutoring programs, instead of focusing on providing funding to boost support already in the K-12 public schools.

“Michigan is one of the only states that didn’t implement a robust tutoring system after the pandemic to get our students back on track and the test scores show,” Dixon said during the debate.

As for school safety, Dixon supports arming educators in schools.

“[Whitmer] wouldn’t allow protection even inside of the school when we know that the best-case scenario is if we have someone that can shoot down a shooter, shoot down the threat. But she doesn’t want anything like that,” Dixon said during the debate. “She wants to make sure your kids are in a sitting duck zone where there can be no guns and there’s no protection against them.”

Schools in Michigan are allowed to hire armed security guards and many have. More than half of Whitmer’s time in office has been spent during the pandemic, which has meant reshifting her education priorities over time to meet the needs of students who struggled with mental health, online learning and the litany of other challenges that come with a “COVID school year.”

Boosted by the influx of federal relief dollars in the pandemic, Whitmer has signed bipartisan budgets increasing school funding for four consecutive years and leveled the baseline funding across all districts with a per-pupil amount of $9,150.

Over the summer, Whitmer struck a deal with Republican leaders in the Legislature to pass a historic $19 billion School Aid Budget that focuses funding on teacher recruitment, school safety, mental health support and boosting the teacher pension system.

Whitmer’s team did not respond to a request for comment for this story.

Whitmer, who enrolled her daughters in public school, does not support the Let MI Kids Learn proposal.

Republicans in the Legislature have already attempted to pass the voucher plan backed by DeVos through legislation. But opponents, including Whitmer, who vetoed the bills, argue the plan violates the Michigan Constitution and the 1970 Blaine Amendment, which prohibits public money from going to private schools.

When Whitmer vetoed the legislation last fall, she said analysts estimated that it would reduce state revenue by $500 million annually.

Whitmer has been working on improving the state’s leaky teacher pipeline, which has been an issue for many administrations prior to Whitmer. She secured funding for the Funding MI Future Educator fellowships, which pay up to $10,000 in tuition for 2,500 future Michigan educators a year, stipends for student teachers and ‘grow-your-own’ programs that help districts put support staff on the path to become educators.

“Our schools cannot provide the high-quality education our kids deserve if we turn private schools into tax shelters for the wealthy,” Whitmer said in her veto letter last November when she shut down a slate of voucher-style bills.

“The movement to privatize education in this state has been a catastrophic failure,” she wrote. “As a result of this movement, Michigan has by far the largest proportion of for-profit charters in the country yet was only one of five states where reading attainment actually declined from 2003 to 2018.”

Whitmer does agree with Dixon on something: Kids need tutors to bounce back from the learning loss caused by the pandemic.

But who tutors them is where they don’t see eye-to-eye.

Our schools cannot provide the high-quality education our kids deserve if we turn private schools into tax shelters for the wealthy.

– Gov. Gretchen Whitmer in her veto of voucher-style bills

Whitmer included money in this current budget for districts to develop learning pods for academically at-risk and economically disadvantaged students, instead of outsourcing the tutors.

“Michigan is one of the only states that didn’t implement a robust tutoring system after the pandemic to get our students back on track and the test scores show,” Dixon said. “When we talk about making sure there’s no wrong path, that hasn’t happened in the state of Michigan. We have the funding to make sure our public schools have the resources that they need. It’s time for us to use them to make sure our kids get back on track and focus on the basics of reading, writing and math.” People attend a vigil downtown to honor those killed and wounded during the recent shooting at Oxford High School on December 03, 2021 in Oxford, Michigan. Four students were killed and seven others injured on November 30, when student Ethan Crumbley allegedly opened fire with a pistol at the school. Crumbley has been charged in the shooting and his parents were also charged. | Scott Olson/Getty Images

Whitmer also has said she wants to increase school safety, especially in light of mass shootings like the one at Oxford High School last November that killed four students, injured many more and re-centered the conversation of safety in Michigan schools.

“As a [former] prosecutor, I led the efforts to get prepared for the new school year with our police officers. And as a mom, I’m furious and angry that in this country, and only in this country, the No. 1 killer of children is gun violence. As governor, we need to act,” Whitmer said during the debate.

She said Dixon has shown she supports the “Second Amendment before second-graders every time.”

The governor also said she supports secure firearm storage, background checks and red flag laws, for which she said is exactly what the Oxford families have been lobbying.

The Nov. 8 election comes just weeks before the anniversary of the Oxford school shooting.

Don’t Drill Your Own Teeth! And Quashing Other Rotten Dental Advice on TikTok