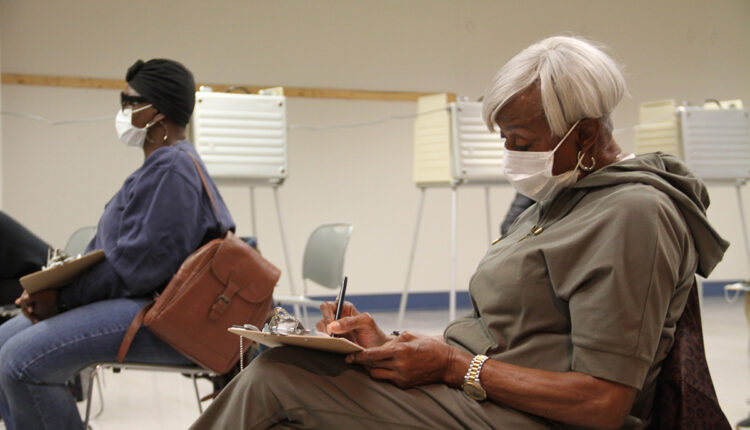 After COVID-19 hit Detroit, Sherita Thompson started voting via an absentee ballot and she’s grateful it’s still an option for people who aren’t again ready to stand in a line of strangers on Election Day.

Thompson rode with a friend Monday to one of the city’s 13 new satellite voting centers. In addition to the reduced exposure to others, Thompson said she prefers to cast an absentee ballot because it gives her a chance to consider the candidates and research ballot proposals. Thompson said she likes to sit down with the ballot after it arrives in the mail, studying each decision carefully on her own time, something she said just isn’t possible in a voting booth on Election Day.

“I get to take my time; I’m not so pressured,” Thompson said. “I get to research somebody I haven’t heard about.”

Monday marked the opening of satellite voting centers across Detroit, giving residents an opportunity to register to vote, pick up absentee ballots and cast their absentee ballots early. Detroiters can visit any of the locations, largely placed in recreation centers, churches and other community spaces near bus routes, to take advantage of Michigan’s universal absentee voting option.

Winfrey said more than 70,000 absentee ballots were issued as of Monday, and she expects 100,000 absentee votes will be counted on Nov. 8. Winfrey estimated turnout will be between 35% and 40% of the roughly 500,000 registered voters in Detroit, which would closely compare with the city’s 41% turnout in the last midterm election in 2018, and 31% turnout in 2014.

Thompson argues that allegations and acts of corruption by elected officials is part of why some Detroiters don’t see the value of voting.

“They don’t feel like it’s real,” Thompson said. “They don’t feel like their vote counts, like whatever they vote for it’s not going to make a difference either way. I still feel that way sometimes, but back in the day, we had to struggle to vote. Now I’m going to utilize (the right to vote) and I know it counts. My one vote will count.”’

Detroit voters in the Nov. 8 election will decide races for governor, Congress, attorney general, secretary of state, Michigan Supreme Court and local judges as well as county executive and sheriff and members of Detroit’s public school board. Three ballot initiatives are also on the ballot, which would change the state constitution to establish a right to abortion, create new election provisions and require politicians to disclose financial information.

The city has offered satellite voting centers to register Detroiters to participate in upcoming elections since the 2012 presidential election, Winfrey said. This year, it’s part of a larger city effort to encourage civic participation. She also said the pandemic, though not as severe as in the last statewide election two years ago, is another reason Detroiters should embrace voting early through absentee ballots.

“I believe we are on the back end of the pandemic,” Winfrey said. “We’re encouraging voters to use our satellite vote centers to lessen the crowds at precincts so we all remain safe, because we know there are still cases out here and we want everyone to be careful.”

Winfrey said there are also accommodations for individuals with disabilities or mobility issues. Election workers will be stationed outside the satellite centers to help, she said.

Poll observers and challengers have the opportunity to oversee the process of registering voters and turning in absentee ballots at the satellite voting centers, Winfrey said.

Absentee ballots must be received by the clerk before 8 p.m. on Nov. 8. Ballots can be turned in at an early voting center or any of Detroit’s seven drop box sites. The drop boxes are monitored 24/7 by surveillance cameras to ensure the ballots are safe and secure.

Voters who wish to mail their ballot are recommended to do so by Oct. 25 to ensure it arrives on time. Detroiters can also call the City Clerk at (313) 224-3270 before 5 p.m. on Nov. 4 to request that ballots be picked up at their homes.

The status of absentee ballots can be tracked online.

Eligible voters can register to vote online with a valid Michigan ID or submit an application by mail until Oct. 24. Voters also can register in-person at the clerk’s office and vote on the spot on Election Day before the polls close at 8 p.m.

Additional information about the 2022 election is available at Michigan.gov/Vote. Residents can use the website to register online until Oct. 24, check registration status, request an absentee ballot, find their local clerk’s office and absentee ballot drop box locations, polling site and to track their absentee ballot.

authored by
First published at https%3A%2F%2Fwww.bridgedetroit.com%2Fearly-voting-centers-detroit-nov-8-election%2F

Family looking for answers after house, vehicle shot up on Detroit’s west side