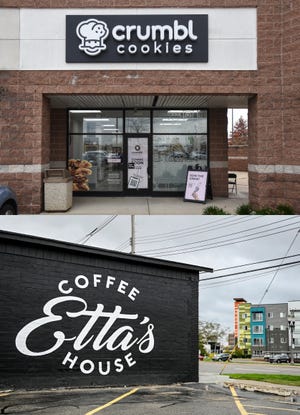 When will they open? The scoop on eateries Greater Lansing is waiting on

The restaurant scene in the Lansing area is ever changing. So far, 2022 has been no exception.

Fans of Detroit-based Buddy’s Pizza in Okemos rejoiced in March when the chain opened a location off West Grand River Road. Then in September, Delta Township lost its location off West Saginaw Highway, the area’s first, two years after it opened in 2020.

Homegrown eateries had a big year, too. Cheesecake baker DeAnna Ray-Brown, who got her start serving dessert from her own food truck, opened her first brick-and-mortar location of Everything is Cheesecake in south Lansing in April. Hooked, a bookstore/coffee shop and wine bar, the brainchild of Sarah Reckhow and Matt Grossmann opened in East Lansing’s Red Cedar development the same month.

But Lansing-area foodies are still waiting on some eateries. Most are still in the works, but delayed, and a few are no longer expected to open. Here’s the scoop on what is and what won’t be coming to Greater Lansing before the end of the year.

Plans to turn a storefront on East Michigan Avenue, once home to Strange Matter Coffee and before that the Lansing City Pulse offices, into a Spanish-influenced restaurant and wine bar were first announced in early 2019.

Justin King and Mike Luther expected to open Bar Mitena at 2001 E. Michigan Ave. that year. In the three years since, King left Bottleneck Hospitality, which opened Bridge Street Social in DeWitt in 2016, then opened Voyages Wine Shop in Lansing over the summer.

Luther said although his company still holds a lease on the East Michigan Avenue property, Bar Mitena may never open.

“I would say right now, it probably most likely won’t happen,” Luther said. He cited “a multitude of factors, a lot of them just personal reasons,” but declined to provide further details.

Andrew Lord said he’s very close to opening the Lansing area’s first Crumbl Cookies in a storefront in Delta Township. The store, at 501 N. Marketplace Blvd., is fully staffed and equipped, but delays have pushed the opening back a bit, he said.

Despite plans to open this month, Lord said it could be early December before the location, which will serve up a rotating weekly menu of different cookies, will open.

“At this point, it’s after Thanksgiving, but we don’t have a hard date yet,” said Lord, a member of the franchise team opening the store. “That’s the latest. The last thing we want to do is have a grand opening on Black Friday.”

Lansing has been waiting for the opening of Etta’s Coffee House for a year.

Owner Coen McGarity first discussed his plans to open the business in a 700-square-foot building at 316 N. Cedar St., a former vacuum shop near Lansing Brewing Co., with the State Journal in October 2021.

Etta’s, named after McGarity’s grandmother, would serve specialty and brewed coffee drinks and raw juices, along with pastries and avocado toast, he said.

But it’s unclear if or when the coffee shop will open. McGarity didn’t respond to a call or text message from the State Journal this week.

Landlord Pat Gillespie, whose company The Gillespie Group owns the building, said he’s hopeful Etta’s will open eventually. McGarity is still leasing the building, he said, but management hasn’t had “a lot of communication” with him.

“We’re unsure what the plans are,” Gillespie said on Thursday.

If you’ve been waiting for Fuel’D to open its doors off West Lake Lansing Road in a storefront that was previously home to Expresso Royale, owner David Yang urges some patience.

His family hopes to open the made-to-order stir fry and salad bowl restaurant by the end of the month. A family illness and demands at the Yang family’s other eateries, which include The Tangy Crab and Ohana Sushi in Delta Township, have delayed the opening, Yang said.

When the 2,300-square-foot restaurant at 1500 W. Lake Lansing Road does open, it will offer seating for about 40 people and employ between 10 and 15 staff.

The Lansing area’s only Golden Corral location, which first opened in 2017 on Elmwood Road in Delta Township, closed its doors in 2020, amid a state-mandated shutdown of dine-in restaurant service.

It hasn’t reopened. A listing on the restaurant chain’s website says the location’s operations are “temporarily suspended,” but real estate agent David Long, with CBRE, said the 10,323-square-foot building is for sale, listed for $995,000.

Golden Corral will not reopen at the property, Long said.

“We’re actually working through an offer right now on the property,” he said. If it leads to a sale, the building would house another restaurant, he said, but nothing is certain yet.

Olive Garden, one of two restaurants being constructed at Delta Crossings, a $200-million project on 200 acres off West Saginaw Highway in Delta Township, is still under construction, Township Planning Director Gary Bozek said.

The eatery’s progress should not be prevented by an ongoing lawsuit over the Delta Crossings project, Bozek said. The property was sold to the restaurant chain’s owners, he said.

No opening date has been set for the location yet, said Lauren Bowes, a communications manager for Darden Restaurants, which owns Olive Garden, but it will likely open in the first half of 2023.

“We will have more exact timing to share in the new year,” Bowes said in an email.

Entertainment is growing at Lansing, Meridian malls, but can it stem their decline?

Pablo’s Old Town’s second location has been in the works for eight years, but owner Pablo Maldonado is hopeful it will open for business at 2010 E. Michigan Ave. in Dec.

“I’d like to shoot for the first week of December,” Maldonado said Thursday.

There have been months-long delays in getting the equipment needed for the location, Maldonado said.

The restaurant is an offshoot of Pablo’s Old Town, which he opened nearly two decades ago in Lansing’s Old Town. The new location is three times the size of Pablo’s original eatery, with seats for 120 people.

“Do you guys have an update on when it’s going to open?”

Dan Kostecke Jr. gets the question daily about the progress at Risen Breakfast & Bakery, the full-service breakfast restaurant he and his wife Rachel are opening in downtown Mason.

“If I had a nickel for every time we get asked I could pay for the whole thing right now,” he said, adding that people’s curiosity is understandable.

In May, the eatery began offering takeout baked goods and quiche three days a week from its storefront at 402 S. Jefferson St., next door to Kean’s Store Co.

Meanwhile, building out the eatery, securing equipment and getting inspections scheduled and completed has been a slow process, Kostecke said.

Risen’s dine-in opening will likely happen in December, he said.