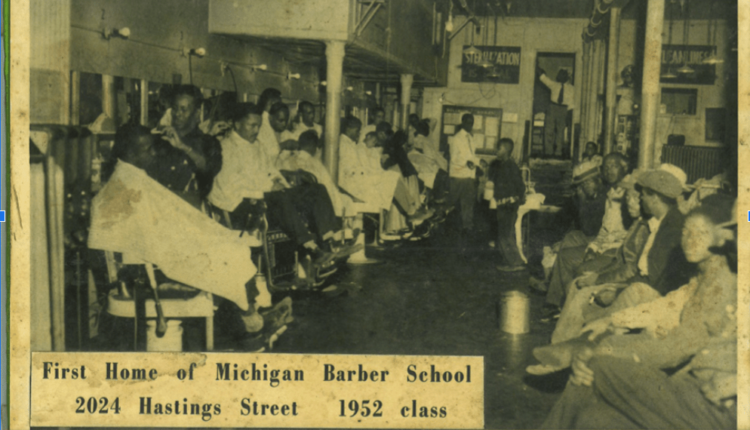 For 76 years, the Michigan Barber School, and its training course, have withstood the test of time for its contributions to Detroit and the local economy.

The city institution has trained hundreds in the vocation, some of who have established long careers as barbers and those who have launched their own businesses. Saul Green, a licensed barber who became the business’ director in 2017, said the key to success is customer service and affordable prices.

“In many urban communities, there is great need in the community for people to come and get high-quality barber services at the prices that we charge,” said Green, a former City of Detroit deputy mayor and U.S. attorney for Michigan’s Eastern District.

Haircuts are $6 Tuesday through Friday and $7 on Saturdays. Some area shops charge between $15 and $20 per cut or more. Student barbers at the school are trained to comply with Michigan board standards that require 1,800 hours of training and practical experience before earning a license. It takes about a year and a half to complete the training process.

Between 1940 and 1950, Detroit’s Black population doubled from 149,000 to 300,000 residents with Southern residents moving to the Motor City seeking a better way of life. In 1950, Detroit’s population was 1.8 million, about three times its size today. The city was also home to the nation’s largest NAACP branch and a thriving Black community.

A 1950 Detroit Tribune ad promoted the Michigan Barber School with the following header: “Barber, a trade with a future.” It was directed toward “Men, Women, GIs and Civilians.” Like other Black-owned businesses and institutions, the school sponsored a local basketball team that participated in a Detroit-based athletic league to help promote community engagement. The team earned the league’s 1948 championship, according to Detroit Tribune reporting.

Forrest was a leading figure in Detroit during the 1940s, ‘50s, ‘60s and ‘70s. He was a force at the Booker T. Washington Business Association, a Detroit Black business advocacy group founded by the Rev. William Peck, pastor of Bethel AME Church in Detroit in 1930. The elder Green was chairman of the Detroit NAACP’s Voter Registration Campaign Committee in 1960. The same year, he was among several Michigan leaders who helped to advise John F. Kennedy as the Massachusetts U.S. senator was seeking the American presidency.

In 1961, Green was appointed by then-Gov. John Swainson to the state Civil Service Commission and also served on the City of Detroit Recreation Commission during the Jerry Cavanagh mayoral administration of the 1960s. Later, he became Detroit’s ombudsman in 1974.

The original barber school site was demolished, however, and replaced by the I-375 section of the Chrysler Freeway as part of the urban renewal effort that was carried out between 1959 and 1964. The school later moved to East Adams Street in 1960 in the Paradise Valley section of the city before moving to 8990 Grand River Avenue near Joy Road, its current site.

The business is a family affair. Green’s wife, Mamie, was a Michigan Bell Telephone Co. employee, and also helped to manage the school. She died in 1997 at age 76.

“My mother, Mamie Green, was an integral part of the Michigan Barber School’s success. She worked at the [Michigan] Barber School for over 20 years, much of that time as the school’s administrative officer,” said Saul Green.

“In order to sustain the business, I stepped in and was available,” said Saul Green. “My dad told us that this was important by his actions, by running the business, and then he made sure that we were prepared to take over when it was necessary.”

The Michigan Barber School is an anomaly in that it has survived over seven decades. Overall, 20 percent of small businesses generally fail within the first year. About half make it to the 5-year mark, and 62 percent make it to the 10-year mark. For African-Americans, however, eight out of 10 Black-owned businesses fail within the first 18 months, according to The National Journal, a Black professionals and small business publication.

De’Angelo Smith, a Michigan Barber School graduate, and instructor at the school, manages his own shop in Detroit and praised the institution. He began “cutting hair” at 14 for family and friends. He now leads Executive Cuts & More on Detroit’s lower east side.

Smith enrolled in the school at age 18 and remembers an early conversation with Forrest Green Jr.

“[He] was the person who really gave me my boots once I came here. He talked to me about this industry,” Smith said. ‘If you can stay here, treat it right, take care of it the proper way, it will take care of you and your family.’”

Teko Edwards, co-owner of Sporty Cutz barbershop on Detroit’s west side, said that Forrest Green Jr. was also a strong influence on him when he was a student at the school during the late 1990s.

“He taught me how to run a business and set hours of operation – to be consistent,” said Edwards, who has run his shop with his business partner, sports journalist Rob Parker since 2002.

On a recent Saturday, most of the chairs at Michigan Barber School were occupied by men, women and children.

authored by
First published at https%3A%2F%2Fwww.bridgedetroit.com%2Fwhen-opportunity-begins-at-a-barber-shop%2F

“That next man mindset is real”